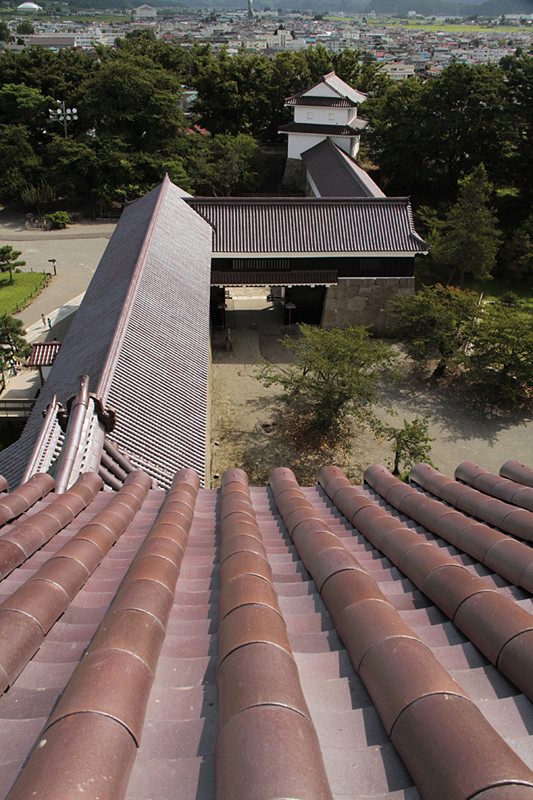 Stage for a tragedy in the Boshin War

The history of Aizu-Wakamatsu is inseparable from the final days of the Tokugawa Shogunate, called “Bakumatsu,” that marked the end of the Edo period. What would become the final violent civil war was erupting throughout the country between the new government forces that wanted to establish a modern nation to resist colonial rule by Western countries and the old shogunate army that wanted the Edo Shogunate to remain loyal as samurai warriors.

One place the old shogunate army was focused was the Aizu domain. The battle set in Aizu was a bitter fight, and even women and children took up arms and fought.

During the violent battle that lasted a month, it was Tsuruga Castle that remained strong to the very end. In addition to a white-walled tower set against rare red roof tiles, shadows of the “impregnable castle” remain here and there in the vast castle premises, including the sturdy stone wall, gate, and turret. The beautiful castle looks stunning against the coloring of the four seasons in Japan, with cherry blossoms in spring, greenery in summer, red and orange leaves in fall, and a snowy backdrop in winter.

Loss of young lives of the “Byakkotai” White Tiger Force

The tragedy that brings many people to tears is that of the “Byakkotai” White Tiger Force. The Byakkotai was comprised of young teenagers who took it upon themselves to get weapons and fight. They were not powerful enough, and ran away to Mt. Iimori. According to one legend, they saw the smoke and flames from the burning samurai residences and mistakenly thought the castle had fallen. Losing their spirit and will, they then committed suicide.

Even today, you can still see endless offerings of flowers and incense at the soldiers’ graves halfway up the mountain and at the spot they took their own lives. Slightly lower down, there is a wooden structure called Sazae Temple with an odd double helix slope.

How about joining the tour below to see the history of Tsuruga Castle and the rest of Aizu?