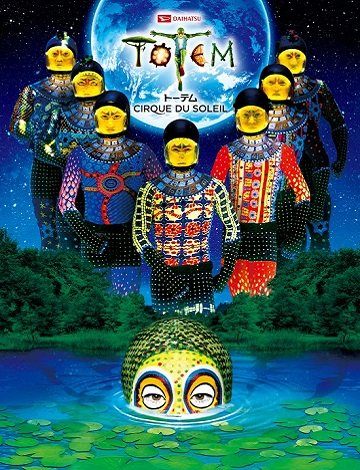 Here's some information about must-see entertainment for people who will be in Tokyo between February and May 2016. It's "DAIHATSU TOTEM Tokyo Performance" by Cirque du Soleil, a cutting-edge circus entertainment group that is the world's greatest.

The small circus troupe Cirque du Soleil, which began as street performers in Canada in 1984, today has grown into an international entertainment group with artists and staff members numbering 4,000 and representing more than 50 nationalities. So far it has fascinated more than 150 million people in more than 300 cities on six continents.

"TOTEM" is one show by Cirque du Soleil. It is a grand tale of the "evolution of mankind, who make the impossible possible," people's pursuit of their curiosity, desires and passions from the birth of mankind to the present and stretching hundreds of millions of years into the future. Combining a fantastical and artistic world view, a stage that uses the latest technology to morph into various forms and extreme acrobatics that push human limits by the world's greatest circus troupe, it is certain to impress anyone who sees it.

TOTEM is coming to Japan at last. It will open in five cities in Japan, with the first set of performances taking place in Tokyo from Feb. 3 to May 22, 2016.

Some of the acts are available on the Cirque du Soleil website and on YouTube. You can get an idea of what the show is like from video alone, but you cannot experience the its true power and energy unless you actually go to see it! If you will be in Tokyo during this time period, you should definitely consider going.

The venue for the Tokyo performances will be Odaiba Big Top. It is located five minutes on foot from Yurikamome Daiba Station and 7 minutes on foot from Tokyo Teleport Station on the Rinkai Line. Because there are a lot of commercial facilities nearby, you can do some shopping while you are there to see the show.

There are three ticket types, for SS, S and A seats. See the table below for prices.

Notes:
・Children's tickets are for children age 3 to elementary school students. If children younger than three need a seat, purchase a children's ticket.
・Because of production equipment, some parts of the stage may be hard to see from some seats.
・Acts are subject to change.