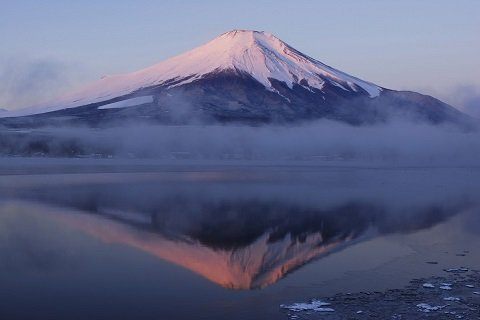 Japan has four very distinct seasons, which makes pictures taken in the same spot look entirely different depending on the season. Many people say that winter photos are particularly artistic. This article describes some good places for taking great photos in the coldest season.

The dry air in winter allows for clear views of even faraway vistas. This is why people say that winter is the best season for capturing Mt. Fuji. Nearby lakes become mirrors, and one of the best places to shoot Mt. Fuji and its upside down reflection is from the north shore of Lake Yamanaka at Hirano.

Kinkaku-ji Temple covered in snow is a beautiful, majestic sight. Because snow is a rarity in Kyoto, anyone treated to such a view is a lucky person indeed. Winter is a great time to tour Japan's temples—Kinkaku-ji Temple among them—for the uniquely Japanese feel evoked by the contrast of temple and snow.

Kamakura are igloo-like houses made of snow. Children like to build them in areas of the country that get heavy snowfall. Because of the large amount of air in snow that works to block cold air from the outside, kamakura are surprisingly warm. The Yokote Kamakura Snow Festival is a traditional event held every February 15 and 16 in the city of Yokote in Akita Prefecture. Visitors to the event can photograph wondrous winter scenes full of atmosphere.

If you can take these shots, upload them to Facebook, Twitter, or other social network and see if your family and friends aren't just as moved as you. Or, show them in real time if you really want to impress them. To do that, you'll need a smart phone or tablet connected to the Internet.

We recommend the low-cost YAMADA SIM card especially designed for price-sensitive travelers who want Internet access throughout their stay in Japan. This card is offered by major electronic retailer "Yamada Denki". Fast data connectivity is available simply by inserting this exclusive SIM card into compatible devices. (Customers are advised that even though Internet accessible areas are available through Japan's largest communication providers, coverage in tourist spots are subject to the network ranges available).