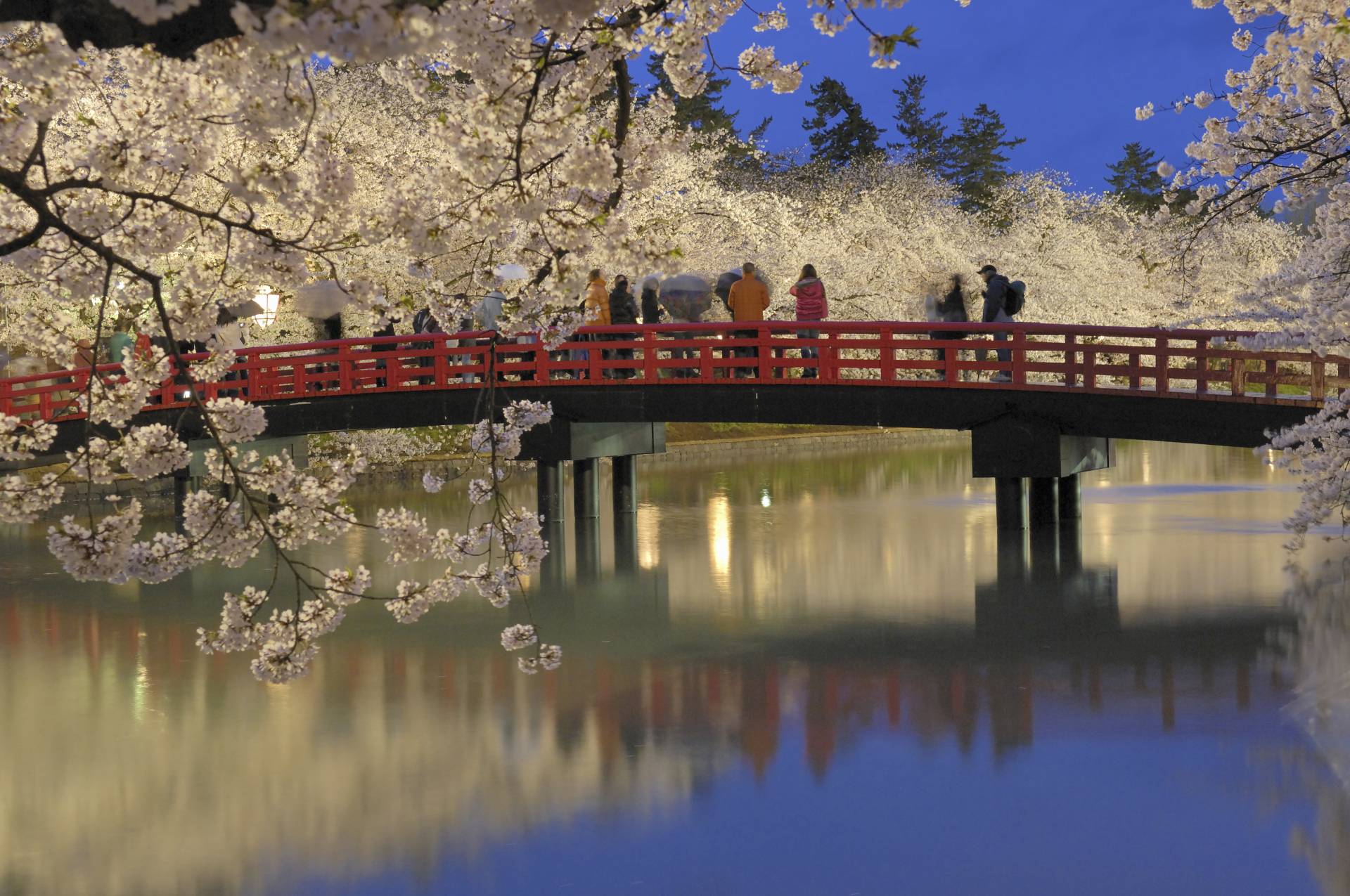 List of All Must-visit Hanami Spots in the Tohoku Region

Bank of the Shiroishi River in Miyagi Prefecture, 1000 Cherry Trees at a Glance and Cherry Blossoms’ Reflection in a River

The following photo is taken near Niragamizeki of the Shiroishi River. Cherry blossoms are reflected in the River with Mount Zao in the background. Such is the so-called “Cherry Blossoms’ Reflections in a River”. You can easily capture the stunning beauty that was only presented in a few films in the past. If you have planned to travel to the Tohoku region, you shouldn't miss the chance to visit here!

Shiroishi Castle in Miyagi Prefecture, a Romantic View of a Castle Town and Cherry Blossoms from Hills

From the hills commanding a view of Shiroishi, you can behold about 400 blooming cherry trees, Masuoka Park and Shiroishi Castle in the Park. At this hanami spot, you can appreciate the beauty of an ancient city nicely decorated with cherry blossoms. You could rent a bicycle from the tourist center at Shiroishi Station on the Tohoku Main Line to embark on your hanami tour of Masuoka Park that embraces Shiroishi Castle.

Hirosaki Castle (Hirosaki Park) is a famous hanami spot representative of Japan; this Castle, Mt. Yoshino in Nara Prefecture and Takato Castle Ruins Park in Nagano Prefecture are three best sights in Japan. During the hanami season, tourists will be greeted by total 50 varieties and 2600 blooming cherry trees planted in Hirosaki Park. They include more than 300 one-hundred-year-old Somei Yoshino cherry trees; their dense foliage and blossoms are as strikingly beautiful as they were in days of old. When the evening lights are lit, the scenery is absolutely breathtaking!

Further Reading: DIY Travel of Aomori in Winter and a Sightseeing Tour in Hirosaki!

Kitakami Tenshochi, located within Kitakami City Park by the Kitakami River and listed as one of Japan’s Top 100 Hanami Spots, is the most well-known hanami spot in Iwate Prefecture. Around 10,000 cherry trees of 150 different varieties grow in the large Park. With a specular cherry blossom tunnel stretching along the river for about 2 km, the Park is a must-visit location for taking photos.

The district of samurai houses at Kakunodate in Akita Prefecture is known as the “Little Kyoto of Tohoku”. Actually this is a street lined with samurai mansions amid a forest of buildings characterized by traditional architecture. In spring, tall and haughty weeping cherries symbolizing nobleness will bloom, every branch and every blossom look invitingly beautiful.

Kakunodate Tourist Association (in Japanese only)

Tsuruoka Park in Yamagata Prefecture, a Stage for Hana no Ato, a Novel and a Film Basing on the Novel

Situated in the center of Tsuruoka, Tsuruoka Park are planted with 700 cherry trees, and many of them have grown for more than 100 years. The Park is also listed as one of Japan’s Top 100 Hanami Spots. Hana no Ato (Japanese name: 花のあと), a novel by Shuhei Fujisawa, a famous historical novelist, was set in the Park and a film based on this novel was produced later. Tsuruoka Park was, of course, chosen as the location for the film. Numerous Japanese people have been moved by the outstandingly beautiful cherry blossoms in the film.

Official Site of Tsuruoka Park (in Japanese only)

An around 90-minute train ride on the Tohoku Shinkansen will take you from Tokyo Station to Fukushima Station. In the vicinity of Fukushima Station, there is a surreal scenic spot, Fukushima Hanamiyama (“Mountain Hanami”) Park with an array of many varieties of flowers. Hanami Yama (“yama” means a mountain) features a large number of cherry blossoms, as well as peach blossoms, magnolia blossoms, forsythia blossoms and rape blossom fields. As you know, “hanami” in Japanese means cherry blossom viewing, and Hanami Yama really lives up to its appellation. Besides, the mountain top enjoys both the scenery in Fukushima and snow-crested Azumayama (“Mountain Azuma”).