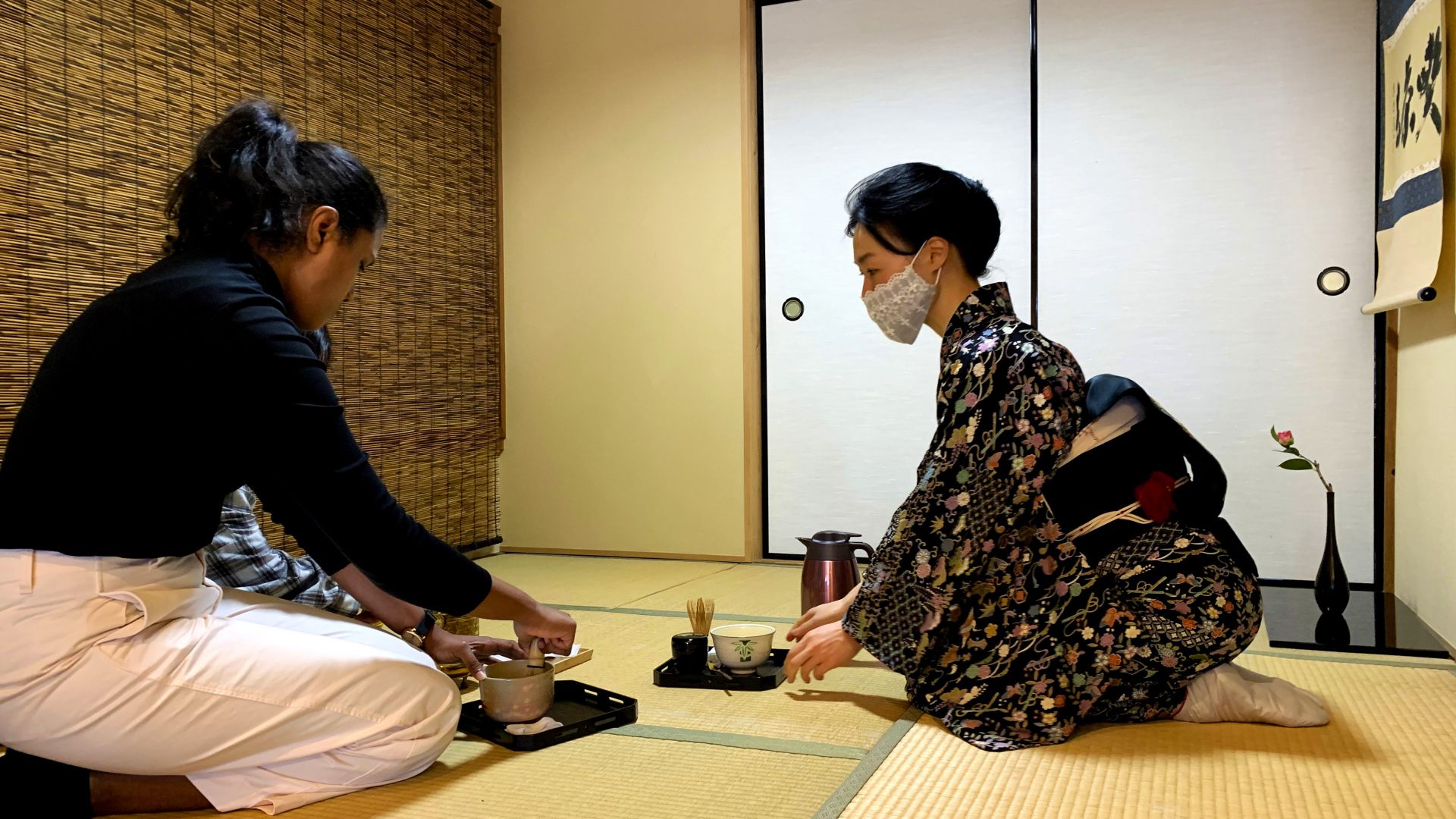 The Hidden Charm and Untold Stories of Kawagoe Matcha

Matcha has been loved by Japanese people since ancient times and it is also loved by people all over the world today. When travellers want to enjoy matcha in Japan, many think about Uji matcha in Kyoto. I think visitors who come to Japan make plans to eat matcha sweets and experience the tea ceremony in Kyoto. However, this is not the only place tourists can experience this. Matcha is also made in former Kawagoe territory (Western area in Saitama prefecture such as Kawagoe, Sayama, Tokorozawa), which is close to Tokyo. You can experience high-quality matcha sweets and a traditional Japanese tea ceremony atmosphere all while staying near the Tokyo area.

The Origin of Kawagoe Tea

It has long been said that the top three high-class teas in Japan are Uji tea (Kyoto), Shizuoka tea (Shizuoka), and Sayama tea (Saitama), but Sayama tea has its roots in Kawagoe tea. (Sayama and Kawagoe are both neighboring cities in Saitama Prefecture).

In the book, which were written from 1356 to 1375, Kawagoe is described as one of Japan's leading tea-producing regions, and many busho (Japanese military commanders) used allegedly Kawagoe's tea at that time. The tea that was being used at that time was matcha, and just like the tea ceremonies today, it was made by dissolving tea powder in hot water.
However, after that, Japan entered the Warring States period, and as the monks and samurai who cultivated tea in Kawagoe declined, so too did the culture of tea, its recognition, and the consumption of tea.

After that, around 1800, a way of drinking sencha (green tea), was developed in Kyoto. At that time, tea making based on the Kawagoe tea history was revived in Sayama, and sencha making became popular there. The reputation that "Sayama sencha is delicious" spread.

People Who Helped the Rebirth of Kawagoe Tea

There are young entrepreneurs who wanted to bring Kawagoe Matcha, which was once called as “Japan's leading tea-producing regions” back to the present day. Masato Nunome and Shintaro Hayashi run a tea company called Zikkichi. In 2012, they organized the NPO Kawagoe PLUS (currently the NPO Kawagoe Matcha Association) and launched the "Kawagoe Tea Reborn Project". And this NPO registered the trademark of Matcha, which made in the western part of Saitama Prefecture centred on Kawagoe City as Kawagoe Matcha.
Kawagoe is usually written in kanji as "川越", but in the 1300’s when Kawagoe matcha was popular, the kanji "河越" was used, so the trademark is also registered as "河越抹茶"（Kawagoe Matcha）. At present, “Kawagoe Matcha” is the only matcha produced in the Kanto region (Tokyo Area).
Currently, more than 150 shops, restaurants and bakeries sell products using "Kawagoe Matcha".

The Characteristic of Kawagoe Matcha

There are several reasons why we were able to bring out the unique taste of Kawagoe Matcha. First, "Tencha", which is the raw material of matcha, is usually produced in warm regions. Kawagoe is located north of other tea producing areas, so harsh winters will often condense the taste of the tea. Also, the tea is only picked twice a year. Due to the small number of seedlings, the tea leaves grow slowly over time. The tastes and nutrients are condensed into rich tea leaves, which deepens the flavour.

Type of Kawagoe Matcha and Matcha Products in Kawagoe

There are many types of Matcha depending on what purpose one wants to use it. For example, one type is commonly used as material for making foods and sweets (Basic Koh, High-Grade Shin, Premium Miyabi). Another type is the high-grade type used in tea ceremonies (Ishiusu).

Before drinking the Matcha, the host served us Dorayaki (red bean-filled pancake) as a Japanese sweet. The sweetness of Dorayaki is a perfect complement for the bitterness of the Matcha. After eating, the ceremony started!
First, the bowl was rinsed with hot water, then, 2 spoons of Matcha powder was put into the bowl. After that, hot water was poured, which must be immediately whisked with the tea whisk (chasen). When it begins to bubble, that indicates that the Matcha is ready to drink. The host also taught us to drink the tea in a Japanese way. That concludes our Matcha tour. So, are you ready to taste the premium Kawagoe matcha?

“It was my first time experiencing a tea ceremony in Japan and it was a splendid opportunity for me to get to know more about the Japanese Matcha culture. The taste and the mellow creaminess were intensified after the final step of making a hot Matcha cup according to the Japanese tea ceremony. I could personally experience the difference between a normal green tea that I consume regularly and a perfectly homemade Matcha cup. As a foreign student who came from an Asian country which is also renowned for tea, the experience of the tea ceremony could make me feel nostalgic and habitual at the same time. Likewise, it took me some time to get used to the taste of Matcha. However, I assume that the Japanese tea ceremony was one of my best memories as a foreign student in Japan.” (Sandali Nethmini)

The only place you can taste Kawagoe Matcha Soba

Hidden between many other shops and cafes in the center Koedo Kawagoe, Kotobuki-an is the only soba shop where we can try soba that contests the limits of what traditional Japanese soba is. Not only using the normal buckwheat flour and wheat flour for its soba, Kotobuki-an also uses the local Kawagoe Matcha as the star ingredient of their Soba.

The Unique Taste of Soba in Kawagoe

Some people may feel that this will change the soba taste. Some might even say that it can’t even be called soba anymore because of its color. But Chef Fujii believes that because of how many of the shops and restaurants in Koedo Kawagoe are serving dishes that are mostly yellow and brown in color, it is all the more reason as to why he has to create something different. From then, Chef Fujii created the iconic Matcha Soba using the local Matcha from Zikkichi- Kawagoe Matcha, a soba that has the exquisite green color of Matcha but still holds the traditional texture and taste of soba. Not only is it very similar to the buckwheat Japanese soba that we may already know and love, one could say that it is even better. The Matcha Soba has a springier and mochi-like texture compared to a typical soba and it has a sweet fragrance, commonly found in matcha. Comparing with Uji Matcha Soba, Kawagoe Matcha Soba has a light green color and is less bitter.

Wariko Matcha Soba – The most famous Classic Menu of Kotobuki-an

Matcha soba is placed in a round lacquerware called Wariko and under the light we can easily see the glossy texture of the matcha soba that will entice us to slurp it all down in one go! There are 3 types of Wariko Matcha Soba sets that we can try at Kotobuki-an. Each of them consists of either three, five or seven side dishes that create a whole new and different experience every time. The chef also generously provided us with one bowl of Matcha Soba for every side dish, each stacked on top of the other, so that we could try all the side dishes to the fullest. Even I was barely able to finish the Matcha Soba set of 5 side dishes. There might be some ingredients that may be foreign and unusual for our taste buds, but I can guarantee that the experience of trying them is something we won’t get anywhere else.

At the end of our meal, they served us a hot soup Soba-Yu that is taken from the water that was used to cook the Matcha Soba. Because it is the water where the chef boiled the freshly made soba, a lot of minerals from the buckwheat and matcha are in the soup. Adding just a little bit of soy sauce and wasabi, the soup alone could be a dish in itself. Not only is it supposed to be very healthy for us, but it also helps us cleanse our pallet and relieve any aftertaste from our mouth. This leaves only a mellow sweet taste of buckwheat matcha soup that is the perfect way to close our Matcha Soba taste testing experience.

Next time I go to Kotobuki-an Kurano Machi, I will for sure try the 7-side dish set! But I do have to prepare myself for all of the Matcha Soba I will be eating.

Some Recommended Matcha Sweets that one can Enjoy in Kawagoe

A flavourful matcha warabi mochi with Kawagoe matcha powder sprinkled on to it.

A popular Kawagoe matcha au lait served with homemade fresh cream and has a distinctive contrast of three colors of green.