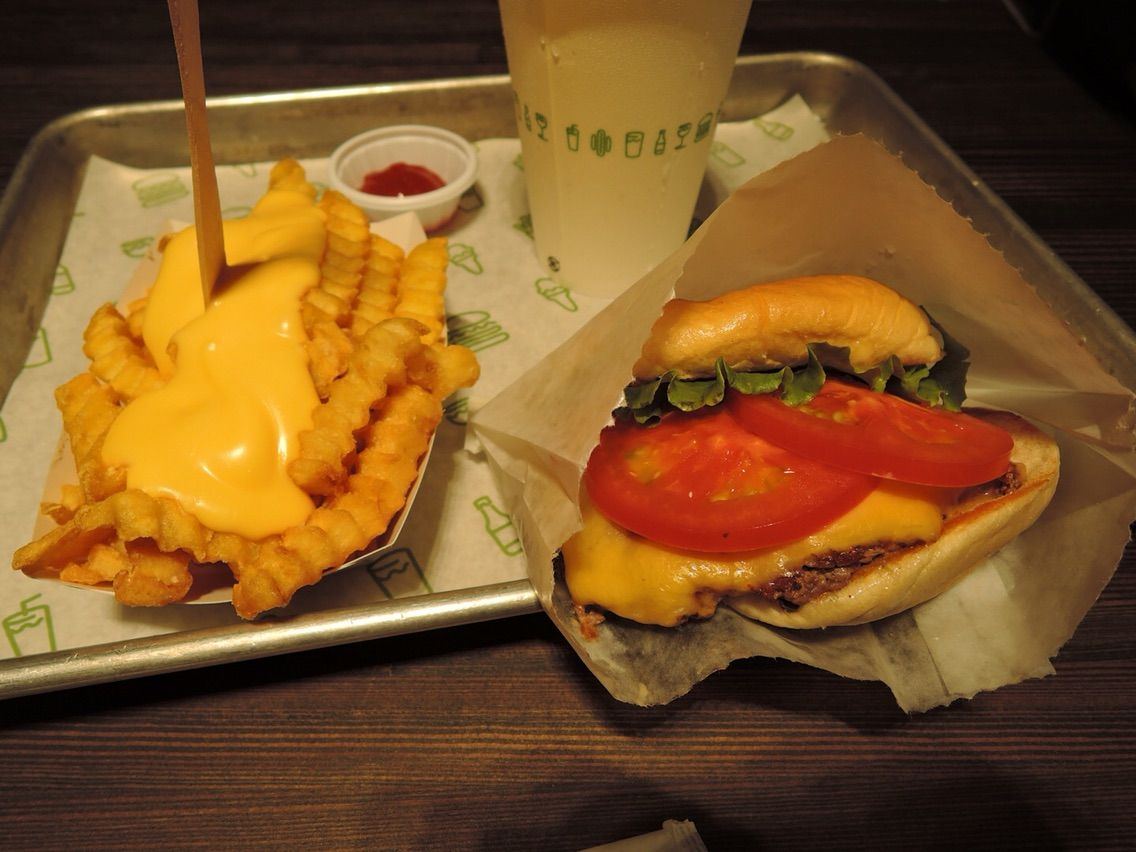 You can always enjoy freshly made food!

SHAKE SHACK can be found on the 1st floor of Atre Ebisu West Pavilion, to the left of JR Ebisu Station’s west exit. It’s visible as you exit the station, so you can’t miss it!

The line is still long around lunchtime, even though it has gotten a little bit better in the half a year since the location’s opening. If you avoid peak times, though, you should be able to get in without waiting for too long.

The menu doesn’t offer any sets, so you need to order each item separately. The menu is divided into categories like “Hamburgers” and “Drinks,” and details are written alongside each dish.

You’re given a buzzer when you finish ordering, and you can pick up your order when the buzzer goes off. There is a bit of a wait because SHAKE SHACK starts cooking the patties only after receiving your order. It’s so nice to get freshly made food!

SHAKE SHACK has around 100 seats available. The front of the restaurant is glass paneling, making it feel very open! I got the impression that most of the customers were female.

I ordered the standard Shack Burger and cheese fries. I got the original lemonade as my drink.

Alright, time to give it a try!

The Shack Burger is a cheeseburger that comes with lettuce, tomato, and the house-specialty Shack Sauce.

The original-blend patty, made of hormone-free 100% angus beef and cooked to medium, was meaty and juicy! The burger’s balance was perfect, between the refreshing vegetables, thousand-island-like Shack Sauce, and the soft potato bun!

The cheese fries are made of Yukon potatoes, which are sometimes called gourmet potatoes. The wrinkle-cut fries are deep fried and crispy. The cheese sauce is rich and delicious, and there’s plenty of it!

I ordered a small, but I was easily satisfied since there still were more fries than it appeared. There is also ketchup available at the counter if you want to change it up.

SHAKE SHACK’s may seem like an ordinary fast food style restaurant, but the end product is a carefully crafted meal, from the ingredients to the preparation. The price of a hamburger is a bit on the high end at 580 yen, but it’s pretty reasonable considering the quality.

You should definitely try it, especially if you enjoy hamburgers!