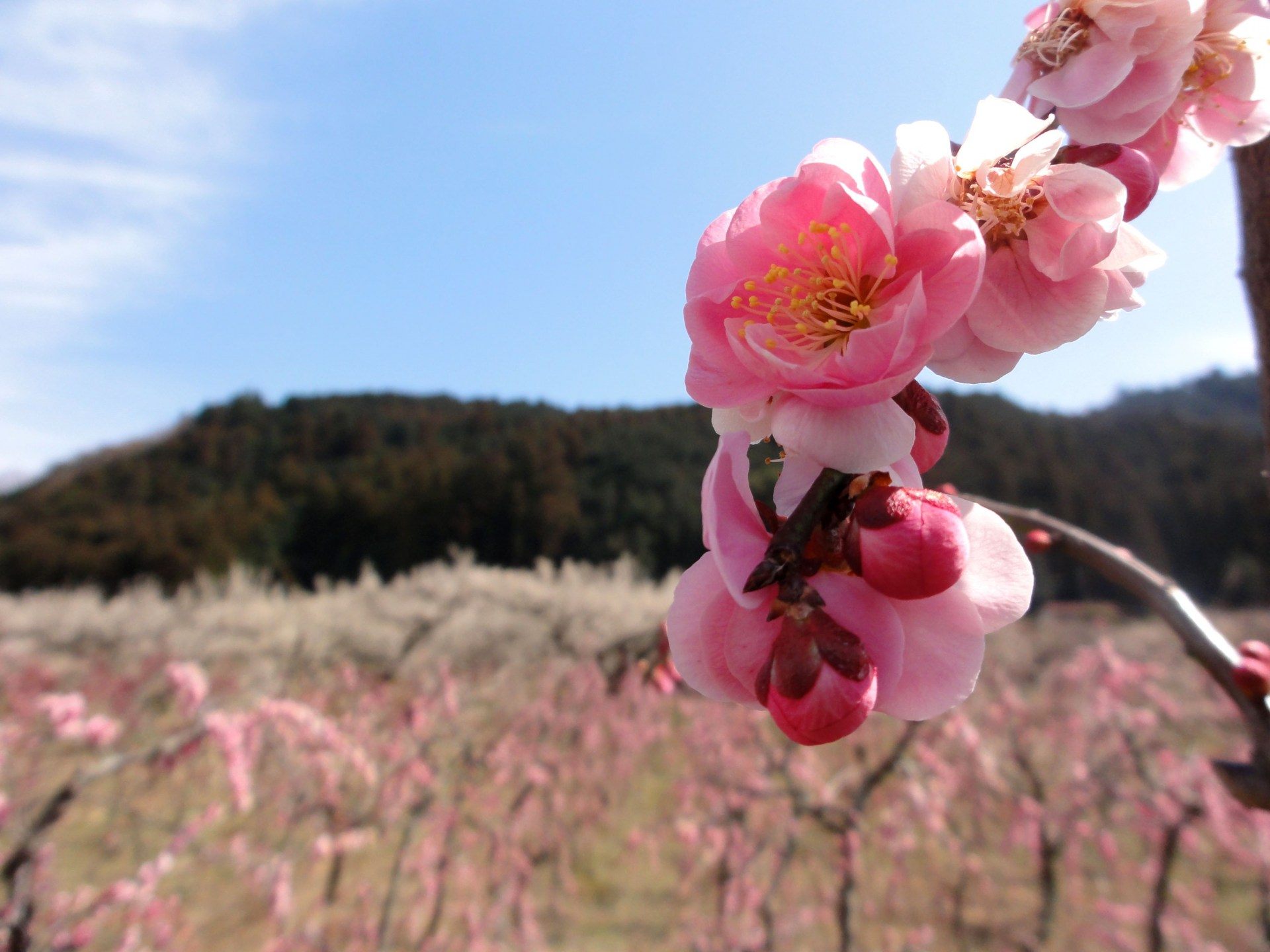 You can get to Saitama Prefecture's famous Ogose Plum Grove from Ikebukuro, Tokyo in about 70 minutes via the Tobu Tojo Line (with one transfer to the Tobu Ogose Line at Sakado Station). Today I’d like to share my Ogose exploration day trip plan with you, which includes flower viewing at the Ogose Plum Grove and a visit to the Kuroyama Three Waterfalls.

First, I headed to the famous Ogose Plum Grove!

I hopped on a fixed route bus outside the Tobu Ogose Line’s Ogose Station and arrived at the Bairin Iriguchi bus stop in about 15 minutes. A short walk away, I found myself at the entrance to the Ogose Plum Grove and paid the 300 yen admission fee.

Inside the grounds, I was met by plum blossoms just beginning to bloom; I was a tad early it seemed. But the white and red plum blossoms and the yellow pheasant's eye blossoms that I did see were beautiful.

The Ogose Plum Grove is about 2 ha in size and is home to over 1,000 plum trees.

The red-blossomed plum trees produced vivid red blossoms that were a feast for the eyes.

There was even a mini SL train (extra charge) that you could ride around the grove. The train, which runs on coal like a real SL, will take you on a 254 m long trip.

Breathtaking sights were aplenty. This plum tree-lined river beside the plum orchard was one of such sights.

After exiting from the plum grove's #3 entrance, by way of Baien Elementary School, I headed towards the Kosugi bus stop on foot. The blossoms in this area weren't in full bloom either, but there were a lot less people which made it easier to really take in the beautiful scenery. And for that, I was thankful. Since these trees were planted and are tended to by local farmers, there's no admission fee. But I ask you to please respect the farmers by not damaging their trees or leaving any garbage behind.

As if the 1,000 trees within the plum grove weren’t impressive enough, there are a whopping 20,000 trees in this area. So I recommend sparing some time to check the grove’s surrounding area out as well!

Next stop: The Kuroyama Three Waterfalls!

To get to Kuroyama, I made my way to the Kosugi bus stop. In front of the bus stop there’s a great rest area, the Ogose Shizen Kyuyoson Center, where you can get your hands on some exciting local products—souvenirs, anyone?

I waited for a long time for the bus, which must have run into traffic around the plum grove or something, but when it finally came I was at the final stop, Kuroyama, in about 15 minutes. As soon as I got off the bus, I began to walk in the direction of the waterfalls.

I suggest following the path beside the mountain stream and taking in the scenery as you trek on. There's only one path, so no need to worry about losing your way.

On the way back down the path to the bus stop, there was a small trout fishing area. Don’t feel like fishing? No problem! You can still enjoy grilled char or rainbow trout without having to catch them yourself.

I decided to try the salt-grilled char (600 yen). There was something extremely satisfying about enjoying a meal surrounded by nature, the sound of the mountain stream trickling in the background. Once my stomach was happy, I took the Kuroyama fixed route bus back to Ogose Station. I can’t recommend visiting this area enough, but perhaps aim for when the blossoms are in full bloom. The peak viewing period for plum blossoms is usually around late February to early March.

Information on a highly economical ticket!

Now is a great time to visit Ogose City, Saitama! If you plan to head to Ogose via the Tobu Railway, head to the ticket office in stations such as Ikebukuro, and purchase an "Ogose Sansaku Kippu" (Ogose Exploration Ticket). It's an all-you-can-ride ticket valid for travel between Ikebukuro and Ogose train stations, and for between Ogose Station and the Kuroyama bus stop on the fixed route bus. All that for only 1,710 yen! And not only are you saving money compared to the regular fare, but you're also saving the time it takes to buy separate tickets each time! What a steal!

You can input the times in brackets below into the schedule above to get an idea of when the bus will arrive at the stops along the way.
Ogose Station – (10 mins) – Bairin Iriguchi – (3 mins) – Kosugi – (13 mins) – Kuroyama