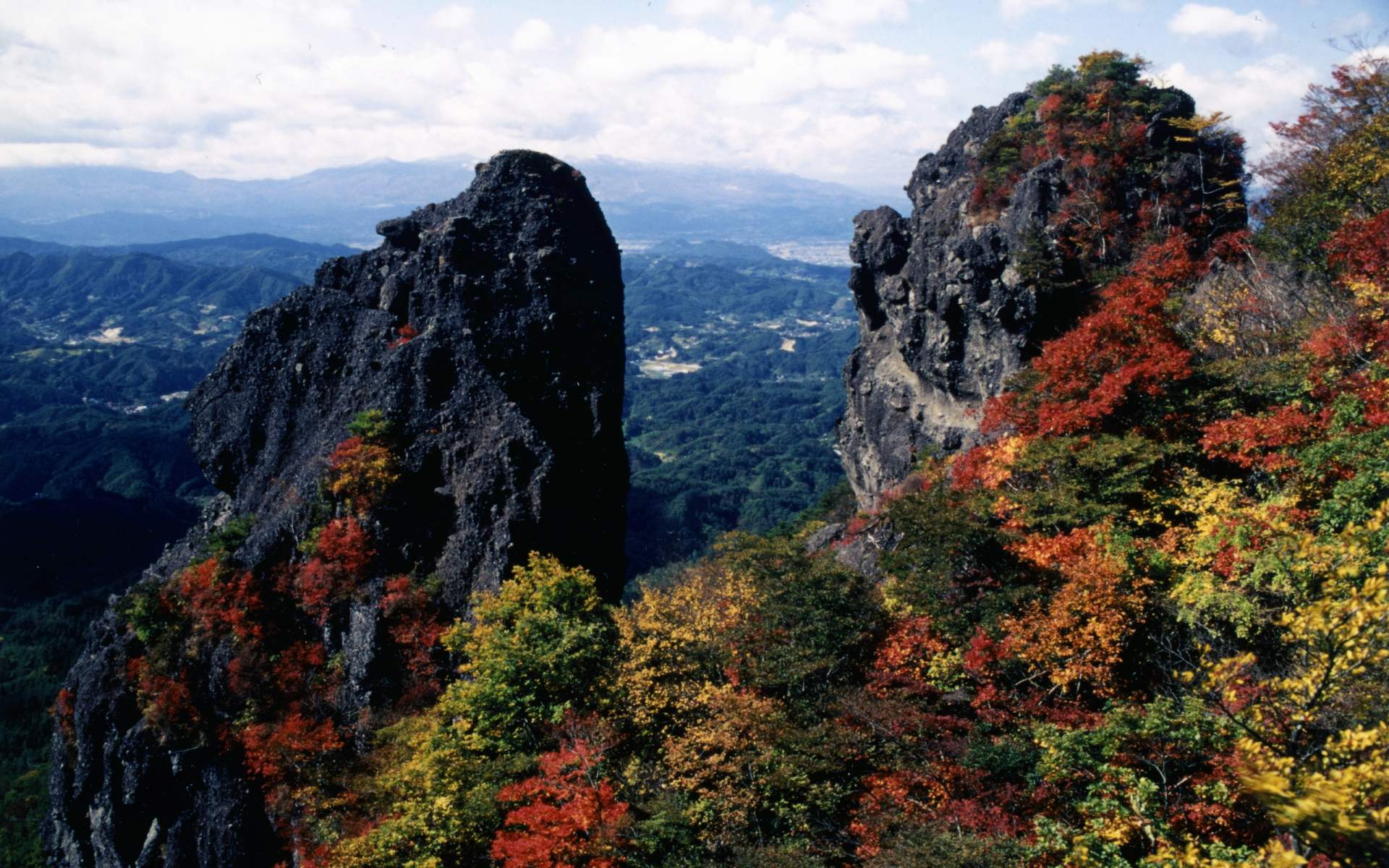 Mount Ryo (Ryozen), located in Date, Fukushima Prefecture at an altitude of 825 m, offers beautiful views all the year round. With numerous maple trees and zelkova trees, the mountain is a famous spot for viewing fall foliage in Fukushima. Boasting undulating terrain, it is also reputed to be a “mountain of rocks”, most of which are basalt. The mountain was built with walkways following its being designated as the site for Ryozen Prefectural Natural Park. You can view wonderful peculiarly-shaped rocks and fall leaves, while you are hiking the mountain.

A bus that runs on National Route 115 and passes through Date can take you from JR Fukushima Station in Fukushima to Mount Ryo within about 50 minutes. Around 1,200 years ago, Ennin (Jikaku Daishi) from Enryaku Temple (Enryaku-ji) atop Kyoto’s Mount Hiei built the first temple on this mountain and name it as Mount Ryo by borrowing the name of Vulture Peak (Ryojusen) in India. Mount Ryo had been regarded as the Buddhist center of the Tohoku region from that time to 1347, in which year South and North courts (Nanboku-cho) conflict broke out. It was said that at the height of this region, 3,600 monks and laymen had been practicing Buddhism here.

For viewing fall foliage at Mount Ryo, you are recommended to set off from the trailhead (530 m in altitude) and head for the Hiroshi-monomi Rock (Hiroshi-monomi-iwa) (825 m in altitude), hence seven major places of interest can be visited during the climbing. The ascent trail and the descent trail, which total about 4 km, will take about 2 to 3 hours. After the mountain was developed into a prefectural natural park, walkways, which were not bumpy, were built to facilitate climbing, and you will not get lost simply by following the signs.

On your return, you can bathe in Ryozen Kousaikan to refresh yourselves, or participate in parent-child activities with kids in the Ryozen Children Village (Ryozen Kodomo-no Mura).

1.Renting a Car for the Parking Lot at the Trailhead

You can rent a car or take a taxi and head for the trailhead of Mount Ryo. On the billboard at the parking lot (with 80 parking places) are the words “Ryozen Prefectural Natural Park”, from which your hike starts.

The first spot after the trailhead is the Hoju-dai.
The way to the Hoju-dai is an ascent, which might sound a little boring.

But, when you pass the Hoju-dai and look into the distance, you will be greeted with enchanting scenery of fall foliage!

You can move towards the sign of Higurashi Rock (Higurashi-iwa) Entrance, while the crooked mountain path is ascending. Although the climb is not arduous, you might step on jagged stones, so sports shoes are recommended.

There is a photography location called Mioroshi Rock (Mioroshi-iwa) near the Higurashi Rock. “Mioroshi” means to overlook. So this place overlooking the scene below is perfect for taking photos.

If you walk further for about 15 minutes, you will see a photography location called Tengu Dohyo (Tengu Sumoujo), which overlooks the scene below as well.

Kokushi-sawa: A Scenic Spot Representative of the Fall Colors of Mount Ryo

The route between the Higurashi Rock and the Homa Altar (Homa-dan) is simply called Kokushi-sawa, which is most representative of the fall colors of Mount Ryo. The scenic beauty below can be photographed from not only the Mioroshi Rock but also the Tengu Dohyo.

Black or white large rocks that are everywhere lend a special flavor to the red leaves alternating with yellow ones.

“Homa” is a ritual practiced in Japan’s Buddhism. As the Buddhist center of the Tohoku region in Japan 1,200 years ago, Mount Ryo was the destination that large number of monks had flocked to for practicing Buddhism. The Homa Altar is also one of the principal places for such practice.

On your way to the Homa Altar, you cannot bypass Oyashirazu-koshirazu (literally “parents don't know, children don't know”, namely “every man for himself”), the most alarming spot of the journey. Only one person is allowed to pass the path one time, with huge rocks on one side and the precipice on the other side, isn’t it hair-raising? (^^)

You have to walk through the rocks as shown in the following photo before moving on. Do you feel like an ascetic?

It is worth noting that, on the way to the Homa Altar, peculiarly shaped rocks as shown in the following photo are a common sight. Many of them have names. Word has it that some monks were deliberating Buddhist doctrines under such giant rocks in the old days.

The ordeal of passing Oyashirazu-koshirazu proves to be rewarding: near the Homa Altar, you will feast your eyes on the distant scenic beauty of Mount Ryo and fall foliage again.

By the way, if you turn northward at the Homa Altar and move on, you can get to the Sites of Ryozen Castle and Ryozen Temple (Ryozen-ji), which may give you a feel of the glorious history and Buddhist civilization of Mount Ryo. As a round trip to the sites will take about 80 minutes, so it is not included in this itinerary.

Climbing continues and the mountain path opened among trees leads to the Kokushi-kan Site.

Soon you can get to a flat ground where a tablet is put up and engraved with the inscription of “Biography: Kokushi-kan Site” before arriving at the former site of Kokushi-chi. Many cornerstones are buried under the flat ground, which used to be the center of Mutsu Province. The Province covered the area of today’s Fukushima, Miyagi, Iwate and Aomori Prefectures and the northeastern part of Akita Prefecture; during a war, the Kokushi-kan symbolizing the heart of Mutsu Province was constructed here.

The Hiroshi-monomi Rock at an altitude of 825 m, is the highest peak of Mount Ryo. It commands a view of Miyagi Prefecture or even the vast Pacific Ocean from its eastern part in fine days.

The summit is not broad, and you may descend the mountain after viewing the scenery for a while.

At about 50 m away from Hiroshi-monomi, there is another huge rock called Gakumon (meaning “learning”) Rock (Gakumon-iwa), which is allegedly the place where distinguished priests practices Buddhism. How about taking shelter from the rain under the rock? It seems that it is risky to stand on the rock.

After descending the mountain from the Hiroshi-monomi Rock and passing the Gakumon Rock, you will soon get to the Boyo-dai, which is said to command a view of distant Udagawa Lake and the Pacific Ocean in cloudless days.
Boasting the harmony of flowers & plants nearby and the fall foliage, it is also a nice place for taking photos as a memento.

The last spot on the descent is the Benten Rock (Benten-iwa). As its name implies, there are many huge rocks of basalt and stones in various sizes on the road, which render the road taxing.

But Mount Ryo viewed from the east side of the Benten Rock is a stunning spectacle. Compared with the Kokushi-sawa, the Benten Rock also has much to recommend it. The Benten Rock features not only fall foliage but also giant rocks. The projecting huge rock highlighted in the photo is the Benten Rock.

Finally you will return to Higurashi Rock, the third place on your ascent and then retrace your step for descent.
The ascent trail and the descent trail, which total about 5 km, will take about 3 hours.

View on the Fall Colors of Mount Ryo

After climbing, you can bathe in Ryozen Kousaikan to refresh yourselves, or if you come here with children, you may participate in parent-child activities in the Ryozen Children Village.

The Ryozen Kousaikan provides accommodation, catering and bath services, the most popular of which is “bath after one-day trip”. The facility is open between 10:00 and 18:00 (last entry: 17:00).

Basic Information on the Ryozen Kousaikan

Best time to view fall foliage
Mid-October to early November
Address
Ryozen, Date, Fukushima Prefecture
Phone
024-586-3404
Access
Take a bus of Fukushima Transportation (Fukushima Kotu) for Kadeda, and get off at the terminal (45 minutes), or take a taxi for the trailhead of Mount Ryo (about 20 minutes)
Official website (in Japanese)
http://www.date-shi.jp/2246