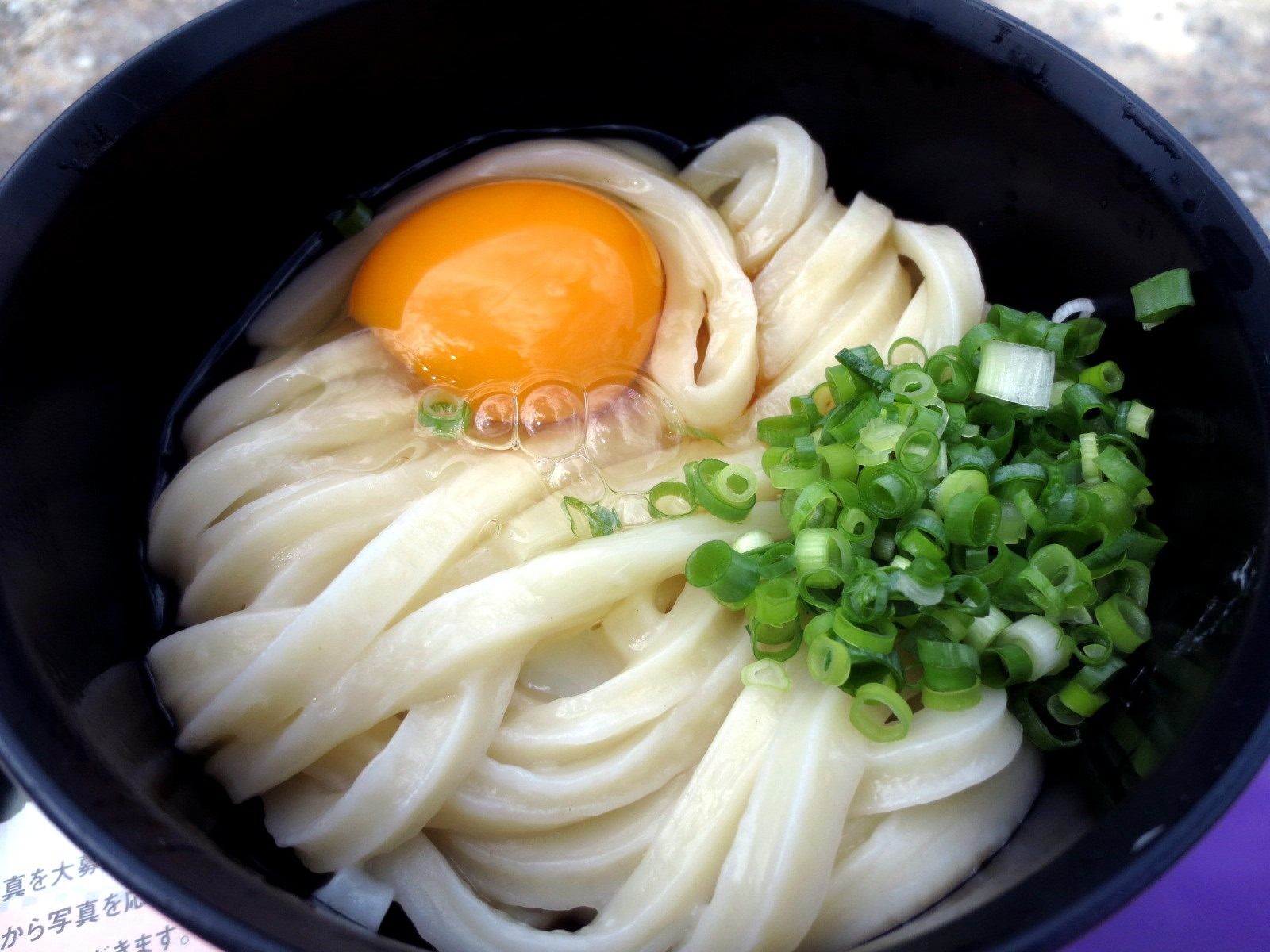 “Sanuki udon” is one of Kagawa Prefecture’s specialty dishes. The prefecture is also home to a vast quantity of udon restaurants, and since oftentimes you can get a bowl for just 200 yen, going around and eating at multiple udon restaurants is fairly popular. This time, I visited “Suzaki Foods Shop,” a popular restaurant located on the west side of Kagawa Prefecture, and it’s so well-known that it wouldn’t be an exaggeration to call it the mecca of sanuki udon!

There are a lot of authentic sanuki udon restaurants I want to visit, but this was the #1 stop on my list!
It’s only open from 9:00am until 11:30am!

I already knew there would be a long wait, but the line actually moved quickly since they took orders in advance. I’m not a fan of waiting in line, but this was a stress-free experience overall.

The menu features shoyu (soy sauce) udon only!
It comes in small (1 serving of noodles) and large (2 servings of noodles), for 200 and 320 yen respectively.
You can also choose between hot and cold udon.

After about just 15 minutes, I got my noodles.
The noodles were freshly cooked and piping hot, so the bowl was hot to the touch too!

With my bowl in hand, I headed over to the toppings area.

I added dashi shoyu to my udon for flavor. Be careful not to put too much on or the flavor could be overpowering!

You can also top the udon to your liking with things like ginger and green onion.

I added green onion and a raw egg (30 yen extra) to my freshly-made and piping hot udon, then poured some soy sauce on as well.
A raw egg is 30 yen, while an onsen tamago is 60 yen.
I’d also recommend putting on as much ginger as you’d like.

I think mine looks pretty good, if I do say so myself!
A lady I didn’t know who was nearby told me “Wow! It looks so good! Let me take a picture!” while she snapped a shot.

The grocery store attached to the restaurant also sells croquettes, which you can use as another topping on your udon.

There aren’t very many seats inside the restaurant, so I looked for a seat outside.

I managed to get a seat, so now it was time to dig in. The relaxed atmosphere was perfect for a meal.

The udon looked so delicious!

I mixed the raw egg into the udon before digging in.
The noodles were of the extra-thick variety, an iconic characteristic of sanuki udon.

The texture was so silky smooth when I finally took a bite!
The noodles had a great chewy texture and were super delicious! It’s such a simple dish, but executed perfectly!

The bowl is painted with a wish for happiness to come to you.
When you return the bowl, you let them know what you had, and then pay.
This time I had a small udon and a raw egg, coming out to 230 yen.

A Statue Near the Restaurant

There was a rather strange statue near the front of the restaurant, so I decided to take a closer look…

The statue is a bit scary looking, but… I also felt like it was wishing me a safe trip home.