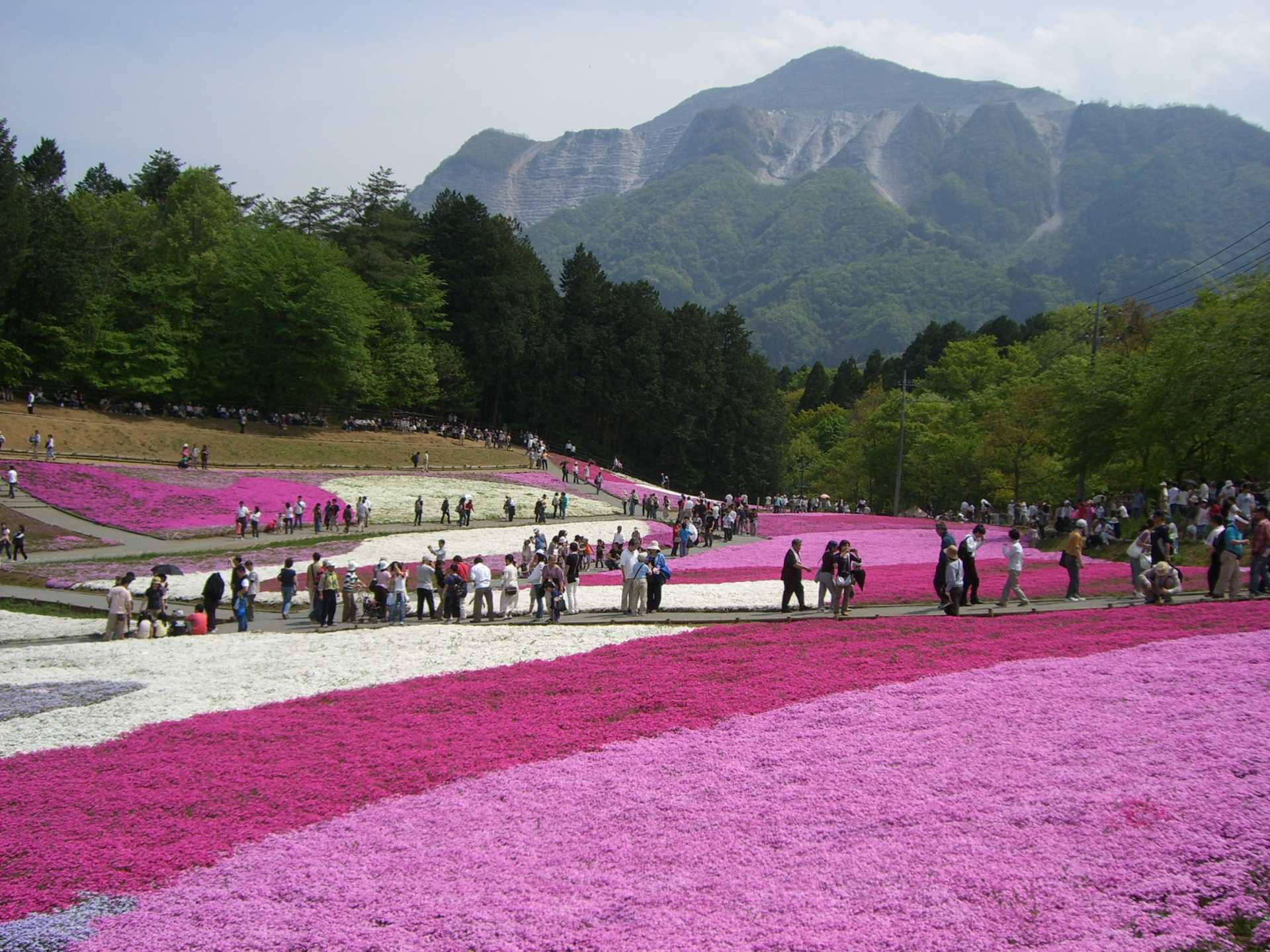 In the eyes of many people, hanami in Japan presumably means viewing cherry blossoms. Actually, it is also a delight to view a vast expanse of shibazakura (moss phlox or moss pink), which will bloom from late April to early May, have a large field beautifully and lavishly decorated, and look extremely romantic.

Here I would like to recommend Hitsujiyama Park that commands a beautiful view of shibazakura. The Park, located in Chichibu, Saitama Prefecture, is acclaimed as “Shibazakura Hill”.

If you get on a Red Arrow (a limited express) at Ikebukuro Station on the Seibu Ikebukuro Line, you can arrive at Chichibu, Saitama Prefecture in 80 minutes, while Hitsujiyama Park is approximately 15-minute walk from Seibu Chichibu Station, the terminus of the said line.

Hitsujiyama Park is the most famous shibazakura spot in the Kanto region. A multitude of shibazakura plants vie to bloom and form an elegant carpet covering an expansive land of 18,000 square kilometers. Colorful shibazakura blossoms, Chichibu’s symbolic Mount Buko and the bright blue sky present a vivid and stunning contrast.

The pink shibazakura blossoms in the picture are “Autumn Rose” (“オータムローズ” in Japanese). The gorgeous carpet patterns are created by these delicate flowers.

The shibazakura variety in this picture is called “Little Dot” ( “リトルドット” in Japanese).
In fact, shibazakura is not the original name of the plant. As its lovely flowers blooming on the ground look like cherry blossoms, it is called shibazakura (“zakura” in Japanese means “cherry”). About 400,000 shibazakura plants in 9 varieties grow in this shibazakura park in Chichibu. Their beauty attracts not only Japan’s locals, such as the residents of Tokyo, but also increasing number of tourists from overseas.

The prime of shibazakura blossoms coincides with the Golden Week in Japan, when the Park will receive a large influx of sightseers. But peace will reign as tourists roam on paths among shibazakura shrubs to enjoy their exquisite beauty and romantic atmosphere.

Hitsujiyama (literally meaning “Sheep Mountain”) Park is allegedly so named because it used to be a sheep farm for Saitama Prefecture. To the west of Shibazakura Hill, there is still a sheep farm called “Fureai Farm”, where you can play with sheep.

During Japan’s Golden Week, temporary express trains will also run on the Seibu Chichibu Line.
Famed Shibazakura Hill in Hitsujiyama Park is not far away from Tokyo, and is an ideal spot for a visit.