A Round Trip to Saitama Prefecture’s Gyoda for a Visit to Ravishing Ancient Lotuses, Tumulus Clusters and the Historic Castle in One Day!

It is only a 1-hour train ride from Tokyo’s Ueno Station on the Takasaki Line (JR East) to Saitama Prefecture’s Gyoda, where ancient lotuses are in full bloom! Besides, there are Saitama Kofun (tumuli, ancient burial mounds) Park and Oshi Castle, which are rarely seen in other cities in Japan. Here is an account of my one-day round trip to Gyoda and I hope it could be helpful to you.

To complete the trip in one day, I must get up early in the morning.
I got on a train for Takasaki at Ueno Station on the Takasaki Line at 6:28 and got off at Gyoda Station at 7:28. At the east exit, I took a temporary bus that left the station at 7:40 and headed for Ancient Lotus Park.

※ The Japanese pronunciation of Ancient Lotus Park is Kodai Hasu no Sato.

Ancient lotus flowers, which will shrink to buds in the afternoon, are most nice-looking around nine o’clock in the morning, when the flowers with ethereal layers of pink petals vie to display their charm over the pond. The largest of these graceful and stately flowers can be 20 cm in diameter.

「Ancient lotuses, natural monuments designated by Gyoda, allegedly grow from seeds estimated to date back 1400 to 3000 years, which were sprouting or blooming when found by accident during an excavation nearby. The news soon got around and attracted many visitors. So, Gyoda reconstructed the area into an ancient lotus themed park for people to view the growing ancient lotuses.
Ancient lotuses bloom between late June and early August.

After saying goodbye to Ancient Lotus Park, I took a bus to the next scenic spot. Five minutes later, I arrived at Saitama Kofun Park, which was in harmony with the nature.

There are nine large ancient tombs in the Park. The top of the Maruhakayama Burial Mound, the biggest circular burial mound in Japan, commanded a panoramic view of the whole kofun and the streetscape of Gyoda. The park was also a well-known hanami spot in spring.

The Inariyama Burial Mound, a keyhole-shaped mound, was built in the late 5th century. It is said that some sacrificial articles not subjected to robbing were unearthed from its upper part.

Some believe that Sakitama is the origin of Saitama Prefecture's name.

Then I took a bus to visit Oshi Castle, one of the seven famous strongholds of the Kanto region.

※ The Japanese pronunciation of Oshi Castle is Oshi-jo.

It is said that during the Sengoku period, Oshi Castle was considered impregnable during the wars with the Uesugi clan and the Hojo clan, and held out against the flood attack organized by Ishida Mitsunari as well, thus Oshi Castle won great fame among the seven major strongholds in the Kanto region.
It is not only a historic castle and a sacred site for castle devotees, but also a picturesque hanami spot when cherries are in bloom.

Departing from Ueno in the early morning, I had returned to Ueno at dusk.
I can complete a round trip to Saitama Prefecture’s Gyoda in one day for a visit to ancient lotuses and historic sites, and this tour is highly recommended! 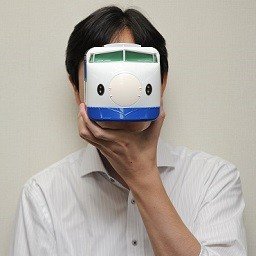 I am a train enthusiast. To me, trains are not merely transportation but my purpose in life.