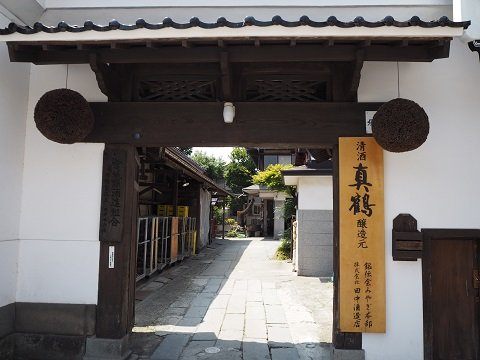 The first places that come to mind when you think of delicious Japanese sake are Niigata and Tohoku region. You can be almost certain of finding a Japanese sake brewery anywhere you go in the six prefectures in Tohoku. Amongst them, in addition to brewing tours, many breweries in Miyagi Prefecture in particular offer a totally different experience with unique features such as excellent souvenirs, close interaction between the workspace of the brewers and those on the tour, or rice cultivation at the brewery. The Tanaka Sake Brewery is one such brewery in Miyagi Prefecture.

Tanaka Sake Brewery with a history of over 200 years

Tanaka Sake Brewery is distinguished by its black and white Namako pattern walls. The founder, Rinbee Tanaka, who was a kimono merchant, was highly business-oriented and opened the brewery in 1789 as a new side business. In addition to sake brewing business, the brewery that was founded that year also owned a lot of property and carried out a wide range of business activities in Meiji and Taisho eras including sale of cloth for kimonos. Today’s building remains the same from its kimono business days, retaining a sense of history and character.

The brand crafted by Tanaka Sake Brewery is called “Manatsuru”. The traditional kimoto/yamahai method is used for the yeast mash that is the sake starter to create a complex sake with a deep acidity and flavor. The mash that is usually only fermented for about two weeks is fermented for about one month to increase the breadth of flavor and create a Japanese sake with a deep, rich taste.
The Tanaka Sake Brewery is the only brewery in Miyagi Prefecture that uses the tedious kimoto method that involves placing steamed rice and water into a flat tub and patiently mashing it with a paddle. Manatsuru that is delicious cold or warm is a firm favorite of Japanese sake lovers.

Continuing even now to use traditional methods even after the earthquake

The 2011 earthquake caused great damage to the Tanaka Sake Brewery. The earthquake that occurred in early spring that is the prime sake brewing season caused great disruption to the brewing process and the walls and roof of the brewery were destroyed. The damage from the earthquake remained in places in the brewery when an inspection took place shortly after. Despite this, the brewery worked single-mindedly to restore operations without changing the traditional home-brewing method. The sight of their hard work was impressive. Kimoto/yamahai preparation, completely homemade malted rice preparation, and yeast mash preparation using a wooden cask are rare in today’s modernized and automated world and are precious techniques that can only be seen at an actual brewery.

After the tour, you can enjoy tasting fresh sake. You may also enjoy other kinds of sake that are in small distribution and the special sake brewed by the sake brewery. How about meeting the sake brewers on the site to try delicious Japanese sake?