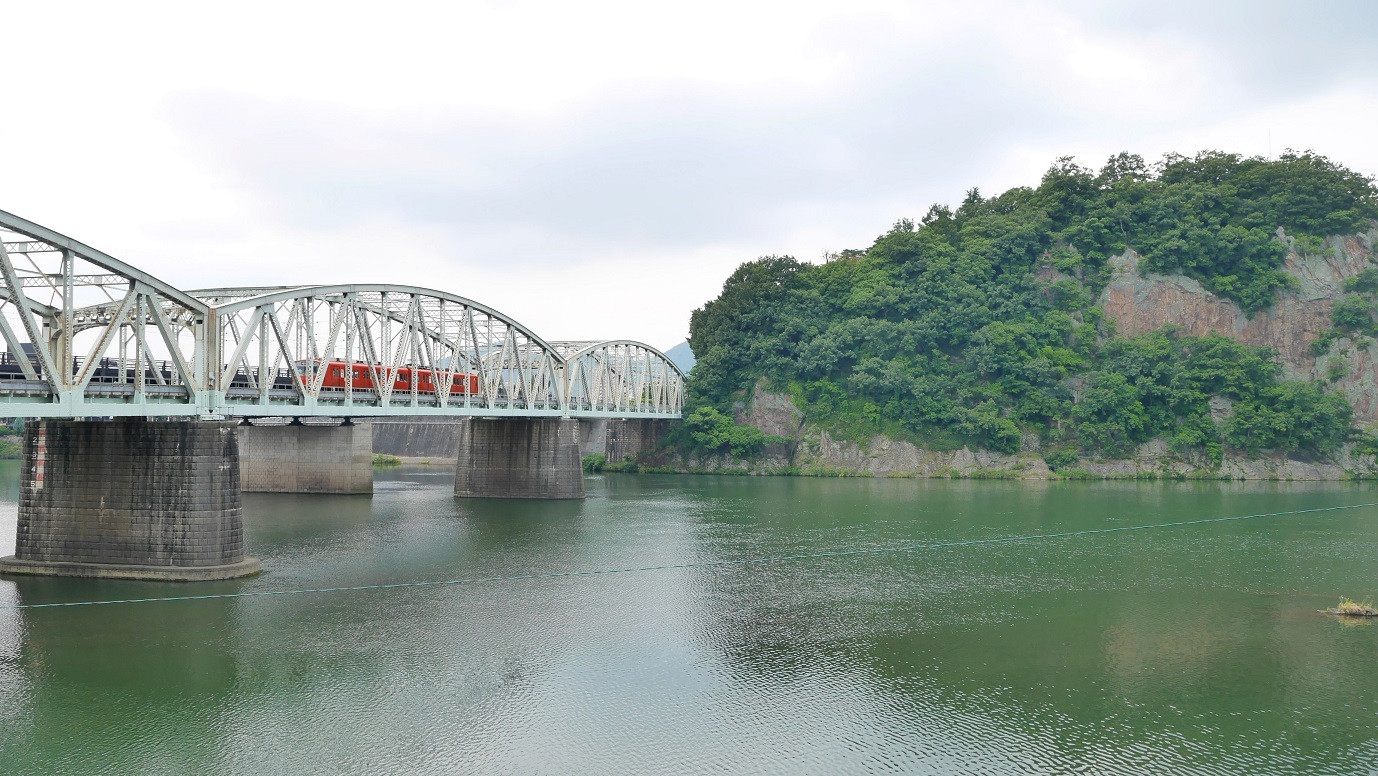 One hour by train from Nagoya's Chubu Centrair International Airport, the entrance to the Chubu region, you'll find Inuyama. This is my excursion report. After an approx. 30-min ride into Nagoya on the Meitetsu μ-SKY Limited Express from the airport, it’s another 30 mins to Inuyama-Yuen Station. The lack of transfers makes it an easy place to get to!

The Inuyama Bridge, which goes over the Kiso River, connects Inuyama-Yuen Station and the next station, Shin-Unuma Station.

Near the bridge, you'll find an ukai, or cormorant fishing, boat dock. These fishermen use anywhere from a few to dozens of cormorants, a species of aquatic bird, to catch fish, such as ayu, for them. The birds swallow the fish—causing them to pass out in their throats—and then spit them out for the fishermen back on the boat. Apparently, since this method doesn’t leave any superficial wounds on the fish it helps them retain their freshness for longer!

Lit up by torches, night ukai fishing is a particularly popular sight. Keep in mind that it is recommended to make your reservations in advance. They offer afternoon and night courses from June until late-October. Next time, I hope to allot more time so I can get the whole experience.

Run your eyes along the path of greenery going upstream from the Inuyama Bridge, and you can see Inuyama Castle standing majestically atop a mountain in the distance.

It’s a shame it was so cloudy, but I slowly grew closer to Inuyama Castle—and grew more excited with each step. If you turn left and follow one of the smaller rivers that merges with the Kiso River, and continue walking for a few minutes, you'll find yourself at the bottom of the hill that leads to the castle entrance.

At the top of the gradual hill is the entrance to Inuyama Castle. The red torii, or Shinto shrine archway, leads to Sanko Inari Shrine. I'll report on that in a moment.

Continue up the gentle slope until you see the Honmaru-mon Gate and pay the admission fee to be let into the castle grounds. Inuyama Castle was built in 1537, and its castle tower is the oldest remaining original castle tower in all of Japan. As the grounds are lined with cherry trees, I’m sure it becomes an even more picturesque sight in the spring.

"Simply magnificent!"
It was amazing to think this was the scenery Naruse Masanari, who became the feudal lord of Inuyama Castle in 1617, got to gaze at daily. I watched as the Meitetsu μ-SKY Limited Express leisurely passed over the Inuyama Bridge in the distance.

View looking out over Honmaru-mon Gate.
Head to the 4th floor to take in the spectacular 360-degree view. The castle features a mawarien, which is a corridor that encircles the floor on the outside. With its outward slanting construction, gaps between the wooden floorboards, and knee-high railings, it's a thrilling experience just to be up there. Just be careful you don't fall!

After circling around once, this was the view of the opposite direction. Here you can see the Rhine Bridge, which acts as a dam, Mount Igiyama, and the Kiso River. While the weather didn't cooperate, the view was still superb.

I visited Sanko Inari Shrine, which is located right next to the castle, afterwards.

The shrine houses a god of marriage, so naturally there were heart-shaped prayer plaques aplenty. The "For a match made in heaven" plaque goes for 400 yen. I took this photo in soft focus to give a first love kind of feel to it. Sadly, this place had nothing for me.

As you leave the castle and head towards Inuyama Station, you’ll get to pass through the charming old castle town; it’s the perfect place to pick up souvenirs or grab a bite to eat.

Only one hour from Centrair, or 30 minutes from Nagoya, Inuyama Castle is situated in a pleasantly accessible location. I promised myself to return during cherry blossom season.

writer: makoa187jp
Has a deep knowledge of railways and believes trains are not simply a means of transportation, but also a means of enjoying the journey. Has a lot of experience writing articles regarding railway travel and is knowledgeable about seasonal foliage. Visited about 50 hot springs so far.