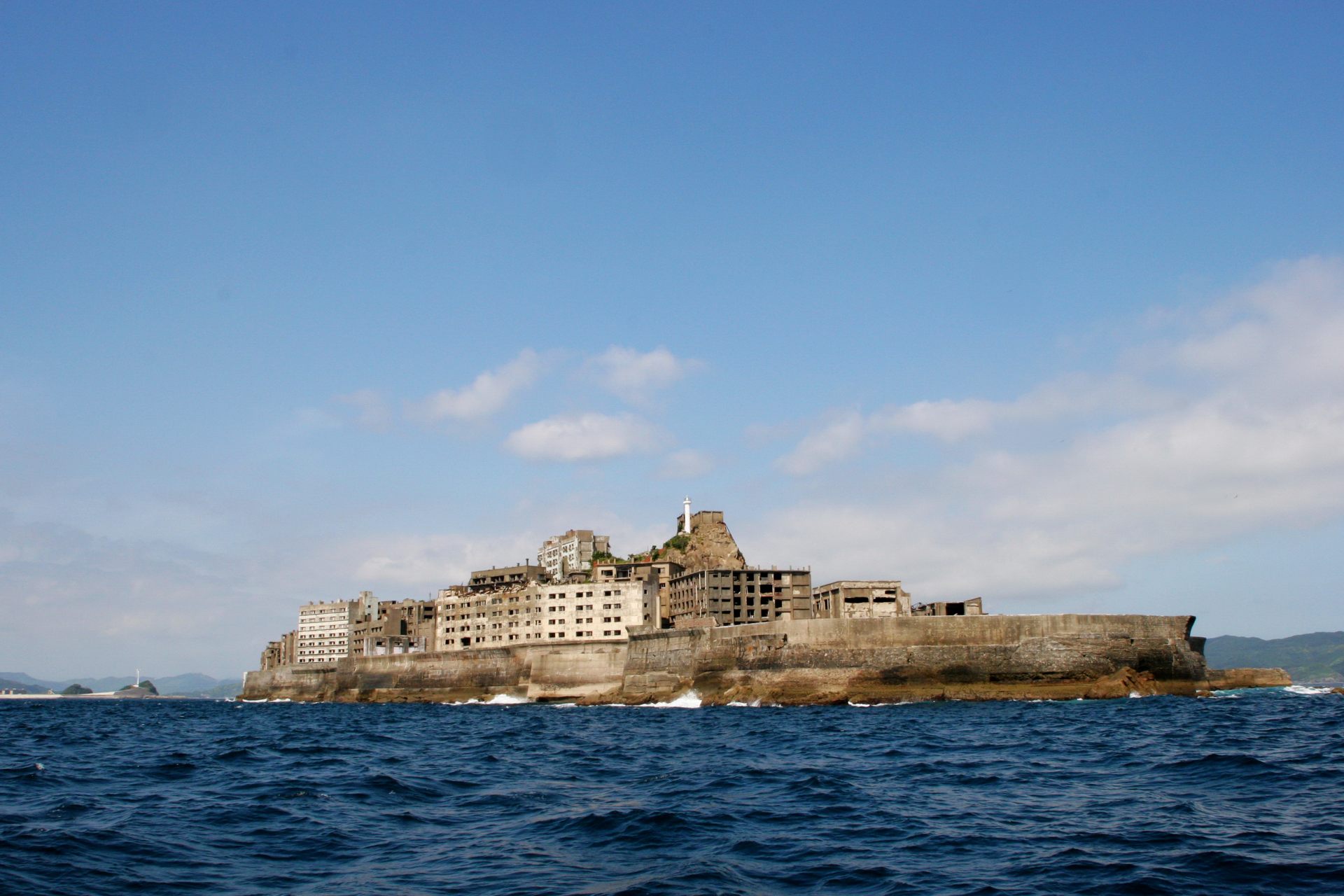 In 1810, coal was discovered on what is now called Gunkanjima. 80 years later, in 1890, Mitsubishi acquired ownership of the island and began going all-out mining it for coal. As the mined coal turned out to be of exceptionally good quality, for almost 100 years Gunkanjima prospered as an undersea coal mining area.

Gunkanjima is a small island with a perimeter of just 1.2 kilometers, but its peak population was 5267 people.

As the population of Gunkanjima increased, houses, schools, parks, shops, barbers, pachinko parlors, temples, and other facilities were built as well. Residents of the island loved the area and called it an “easy to live on island,” but when the mines closed in 1974, people began to leave the island, and it is now deserted.

Along with simply the passage of time, one of the reasons that Gunkanjima’s coal mines were shut down is said to be the shift from coal to petroleum as a primary source of energy.

The island’s official name is Hashima Island, but it gained the nickname “Gunkanjima” (“Battleship Island”) because its shape resembled that of a battleship. Even today, it is better known as Gunkanjima than Hashima Island.

Japan’s first reinforced concrete high-rise residences were also abandoned on the island. The buildings were placed in high locations with good views, but these residencies were exclusive for high-ranking executive staff members. The rooms of ordinary workers did not have individual toilets or baths, instead using communal ones, but the executive staff members’ rooms did have individual bathrooms. Even today, certain items from before Gunkanjima’s exodus, such as retro home electronics, furniture, bottles, and other items, are still partially intact in the rooms.

Many of the buildings on Gunkanjima were connected by passages, and at the time it was said that people could walk across the entire island without ever needing an umbrella because of that network.

Some of the buildings on the island are destroyed or in the process of falling apart, but they were worn down by the passage of time and the power of the elements. People who have visited Gunkanjima multiple times say that, “The color of the buildings, and even the island’s landscape, change with each visit.” People inhabited Gunkanjima until 1974, and while that is still recent history, day to day its appearance changes thanks to strong winds and the power of nature. No matter how many times you visit, it is a mystical place that is different each time.

Gunkanjima has been featured in a variety of movies and stories over the years. In recent times it has been used as the set location for the live-action movie version of the hit manga “Attack on Titan,” and appears in the 23rd James Bond movie installment, “Skyfall,” so people who have watched those movies may end up enjoying a visit to Gunkanjima even more.

To go to Gunkanjima, it is absolutely necessary to go by a Gunkanjima landing tour. Individuals cannot go to the island by themselves, so an advance tour reservation is required. Although there are several tour boat companies available, we recommend choosing a company that offers round-trip tours. ※Certain tour companies offer only one-way or round-trip tours.

Also, as there are many worn down and dilapidated buildings on Gunkanjima, the footing can be bad. As such, please be aware that certain tour companies may not allow customers wearing high heels or who have been drinking to disembark.

Gunkanjima can be very hot during the summer, so please be sure to bring along a hat for sun protection and drinks.