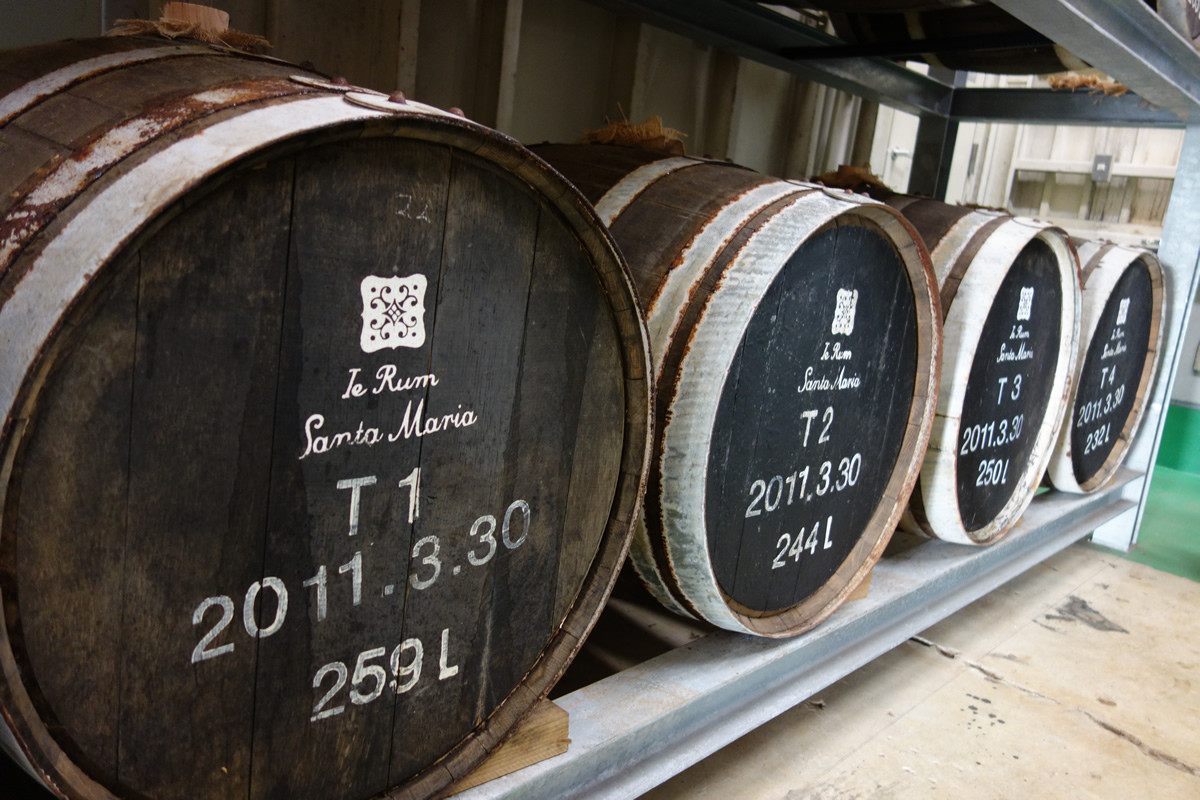 I hopped on the ferry departing the main island of Okinawa for Iejima, which was 30 minutes away. My final destination: a tour of a certain rum distillery on the island of Iejima. I had heard that Ie Rum Santa Maria has a fabulous reputation and makes their rum from sugarcane, so I was eager to check it out!

I headed straight for the distillery!

I was shown around by Mr. Chinen, the young man in charge of the place. I learned that the facility was originally built by Asahi Breweries and the local government to produce bioethanol fuel from sugarcane by taking advantage of distilling technologies it had developed for alcohol production. Ie Rum eventually took over the distillery; however, numerous issues have arisen due to the fact that it was not built specifically for the distillation of rum—or so I was told.

This huge machine is used to press sugarcane and squeeze the juices out of it. It takes over 5 hours to press 1 tonne of sugarcane, which is thrown in by hand, stick by stick!

Apparently, there are two types of rum. The type you end up with depends on the raw materials being distilled. Industrial rum accounts for 95% of all rum and is made by fermenting molasses, the byproduct of sugar refining. Agricole rum, on the other hand, is what Ie Rum produces. It is made by pressing sugarcane into cane juice and then fermenting and distilling the juice as is. Ie Rum uses only the juice from Iejima-grown sugarcane to make its luxurious rum. The sweetness and aroma of the sugarcane is simply divine.

Distilled rum is then divided into two batches: half is matured in stainless steel tanks, the other half in oak barrels. This produces two different rums: crystal and gold. The room where the oak barrels are stored had a wonderfully sweet aroma.

The oak barrels used by Ie Rum are actually whiskey barrels previously used by Asahi Breweries for its famous Nikka Whiskey. The aroma was extremely pleasant! After maturing in the barrels for about 3 months, the rum is shipped off.

Interestingly enough, Ie Rum’s logo was designed to combine the island's two main symbols: Mt. Gusuku and lilies. Since the lily is also a symbol of the Virgin Mary, they named their rum Ie Rum Santa Maria.

The tasting corner is set up so you can try both Ie Rum Sanata Maria’s crystal and gold varieties. I was delightfully surprised at the exquisite flavour! This is rum like no other; it was noticeably different from the standard type usually sold in stores. The sweet aroma of the sugarcane was prominent but refreshing, and it was smooth enough that even those who aren’t generally partial to rum would enjoy it!

I much preferred the oak barrel-matured gold rum. It features a distinct barrel scent and rich amber colour. I highly suggest drinking it straight to really experience its luxurious flavour. Then there's the crystal, with its fresh sugarcane sweetness, which I think is best enjoyed in a cocktail or mixed with soda. Keep in mind, however, that both varieties have an alcohol content of 37%!

The distillery tour and tasting was a wonderful experience. What fun!

I drank some Ie Rum back at my lodgings that night as well. It paired with pork better than sashimi, I think. Bliss!