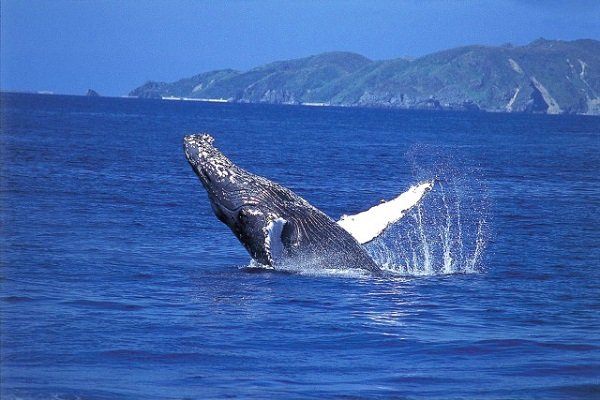 Winter in Okinawa is a sensational time of year for marine leisure activities; it’s especially renowned for its whale watching tours. From late December to early April, the majestic humpback whales make their way to the warm waters of Okinawa for what is believed to be for breeding and birthing purposes.

While the tours are only available for a limited period of time, varying departure locations make it convenient for anyone who wants to join in on the fun. With an over 90% chance of encountering whales on your tour, you’re sure to leave fully satisfied. If you’re worried about falling into the unlucky 10%, however, you’ll be happy to learn that many plans include either a free second tour or a full refund in such cases.

So what exactly does a whale watching tour entail? Well, we participated in a tour organized by Total Marine Spot NEWS departing from Naha City's Miegusuku Port to find out!

After arriving at Miegusuku Port, we made our way to a car with the tour company's banner spread across it and signed in. Keep in mind that numerous companies operate out of the same port, so make sure you find the one you registered with. Now would also be the time to take any anti-nausea medication you might have prepared as the waves can get pretty bumpy. Once everyone was accounted for, a memorial group photo was taken in front of the boat—say cheese!

Next, we put on our life jackets and grabbed a seat. As an important rule of safety, there's no standing or walking around until arrival at the whale watching point. However, as there is a toilet on board, if you require the facilities at any time you can raise your hand and a member of staff will guide you to them.

On this particular day, though still in the middle of February, the sun was shining strong and we were sweating in our life jackets. It’s important to dress according to the weather: cold-weather outerwear, rain gear, or in strategic layers (especially on warm days as overheating can make seasickness worse). This is what it looked like on the boat.

Within 20-30 minutes we arrived near Zamamijima, joining a great number of other tour boats. Apparently they exchange information about whale locations via wireless radio. I counted 9 boats total!

At this time, many people moved up to take in the view from the second floor deck, but those suffering from seasickness were advised to stay in their seats until the whales made their appearance. Rest assured, you can see just as well from either point.

Just then, we heard the staff yell, “Everyone! 10 o’clock!” We turned in unison to see some whales spouting off in the distance. Everyone cheered. Since whales come to the surface every 10-15 minutes to breathe, keeping an eye out for spouts is often the best way to locate them.

Despite the high waves making conditions slightly difficult, during the hour or so spent at the watching point we had four or five good chances to see the whales, albeit from a distance. Every passenger left satisfied and thankful to have been given the chance to encounter these enchanting creatures.

If you’re lucky, you may even get to see them play right next to your boat! Next time you’re in Okinawa, I urge you to sign up for a whale watching tour and see for yourself!