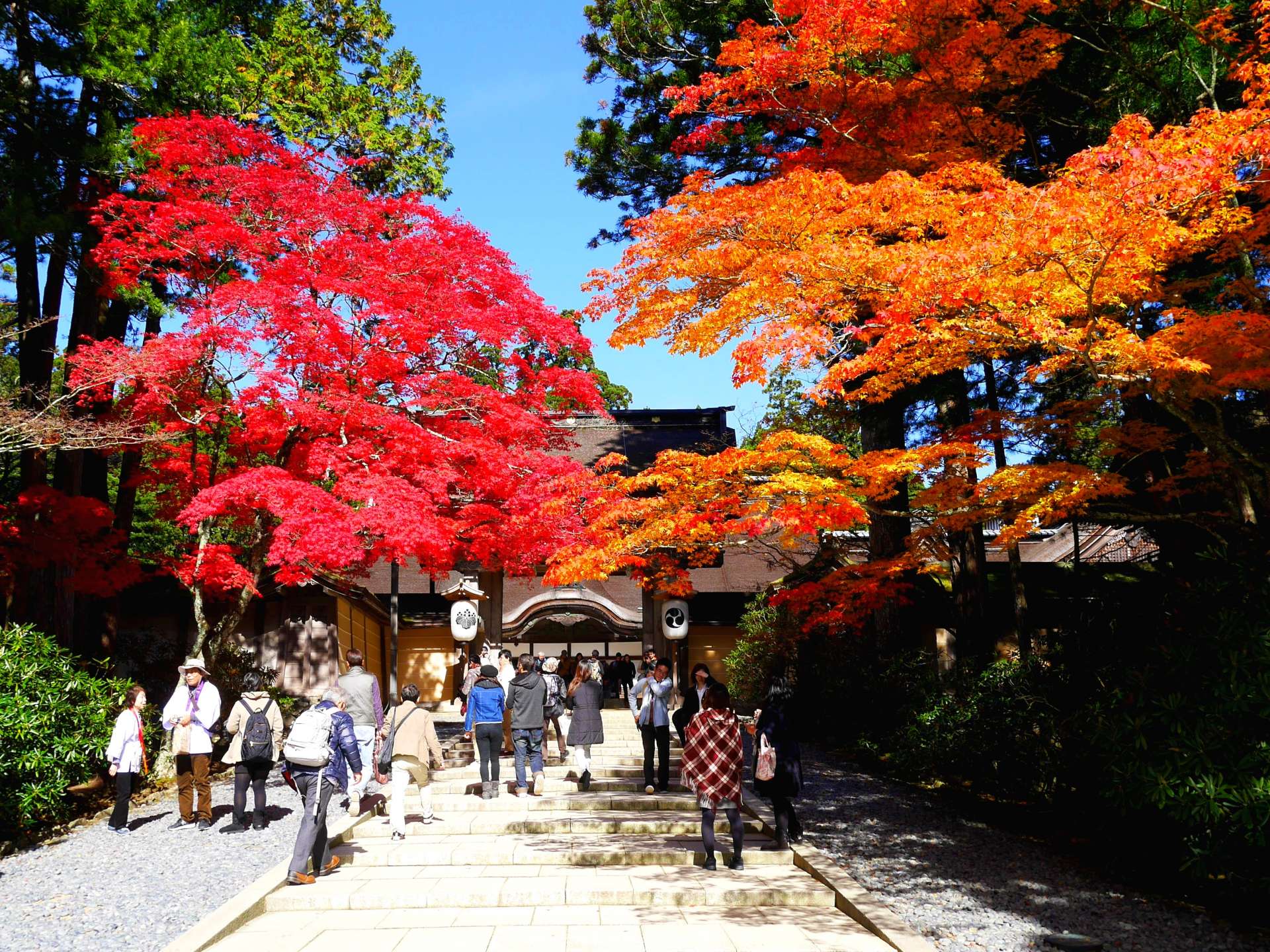 Wakayama Prefecture. Mt. Koya, a sacred place of which Kobo Daishi (Kukai), a famous poet, sang praises of its autumn leaves. He was fascinated by the brilliant autumn leaves during clear weather.

※This article was written about a visit on November 13th, 2016. Please refer to it for planning your own trip!

Kongobu-ji and “tunnel of autumn leaves”

The autumn leaves outside of Kongobu-ji’s front gate were at their peak! There were so many tourists who came to photograph the lovely leaves that there was always a steady stream of foot traffic.

The main hall stands past the main gate. It is built in traditional Japanese shoin-zukuri architectural style, and the building extends 60 meters east-to-west and around 70 meters north-to-south. Mt. Koya celebrated its 1200th year in 2015. I was absolutely taken in by the amazing sight of the main hall, a sacred place for the Shingon sect of Buddhism founded by Kobo Daishi.

Furthermore, the small tub on the hall’s roof stores rainwater. It’s built in such a way that, in case of fire, the sparks will not ignite the cypress roof, which is built with layer upon layer of Japanese cypress bark. The design is a bit of wisdom from an ancestor who hoped that the water would keep flames in check.

Past the main gate, if you turn right you’ll see “Jabara-michi.” It’s a pathway that leads to Konpon Daito, and in the fall it becomes a “tunnel of autumn leaves”!

The tunnel of leaves, full of yellow and red tones, shined beautifully in the lovely weather. Everyone was standing and taking pictures.

Passing through Jabara-michi’s autumn scenery, I made it to Danjo Garan. The beautiful scene of the eastern pagoda and the autumn leaves spread out before me.

As I continued on, I saw “Konpon Daito,” which is an eye-catching scarlet red. It is a symbol of the roots of the Shingon Buddhist sect, and it has a very impressive form to it.

There are also large pine trees in front of Konpon Daito. There is a legend that says that when Kobo Daishi was returning to Japan from China, he threw a ritual instrument called “sankosho,” and it passed over the ocean all the way to Japan. Because he found it caught in the branches of these pine trees, he decided to make Mt. Koya a sacred place for the Shingon sect of Buddhism. These pine trees are the reason that Mt. Koya became known as a sacred area.

Tourists desperately search for fallen pine needles beneath these trees. Many pine needles come attached in pairs, but “rare” pine needles come in sets of three, which is what they’re searching for. Everyone is frantic, since they all want to take these lucky “three-leaf pine needles” home as a good luck charm. I was lucky enough to find one and take it home. It turned out to be a great souvenir.

The autumn leaves around the bell tower are also gorgeously dyed red.

Next building is “Rokkaku Kyozo.” It is said that the empress-consort of Emperor Toba had it built in 1159 to pray for her husband’s happiness in the next world. It has been destroyed several times in fires, and it was most recently rebuilt in 1934, making it appear fairly new.

By the way, there are several large bars (to grip) along the bottom of the building, so you can push the bars counterclockwise and rotate around the perimeter. Making a full rotation is said to be the same as “reciting a long sutra,” so tourists make an attempt to do it themselves. It takes a lot of strength to turn it, but you should give it a try!

After I passed through the “central gate” and turned left, there were lots of souvenir shops and restaurants all in a row, and the street had a nice atmosphere to it. It’d be a good place to stop and have lunch. I recommend Mt. Koya specialties, like “sesame tofu” and “shojin ryori” (vegetarian cuisine with origins in Buddhist dietary restrictions).

I think that it would be nice to walk around this area from morning until afternoon to really enjoy the gorgeous autumn leaves.
Next, I went to “Okunoin” by bus. This journey will continue in “Part 2,” with more information on how to access and enjoy the area around Mt. Koya.