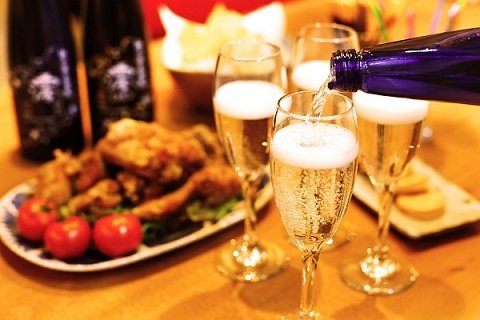 Refreshing and cool! It's new, it’s exciting, it's sparkling sake!

Sparkling sake is all the rage with women and young adults these days. To put it simply, it’s a sweeter, carbonated, and easier to drink sake with low-alcohol content. The soft foaminess of the bubbles is reminiscent of champagne— sake like you’ve never seen it before! It’s perfect for both those trying sake for the first time, and for sake-lovers alike.

Takara Shuzo's Sho Chiku Bai Shirakabegura Mio Sparkling Sake is a product with ever-increasing popularity. When it was first put on the market in 2011, it was rare to come across. But ever since 2013, when it was introduced to supermarkets and convenience stores around the country, sparkling sake has been flying off the shelves. Mio is the first brand to come to mind for many people now. If you tend to stick to the sweeter cocktails, I suggest you try Mio next time; it may just be right up your alley.

Our choice selection is the newly released Mio Dry. While the original Mio has a hint of Muscat grape flavour, Mio Dry tastes more like fresh, crisp apple. Try it and you'll instantly understand its appeal. With an alcohol content of 5%, soft, foamy bubbles, and a fruity taste, Mio Sparkling Sake is delicious, easy to drink, and the perfect pairing to cheese and desserts. Whether you like Japanese sake or not, you’re sure to like this. Tasty and packaged in a stylish bottle, I can assure you that anyone would be thrilled to receive it as a souvenir.