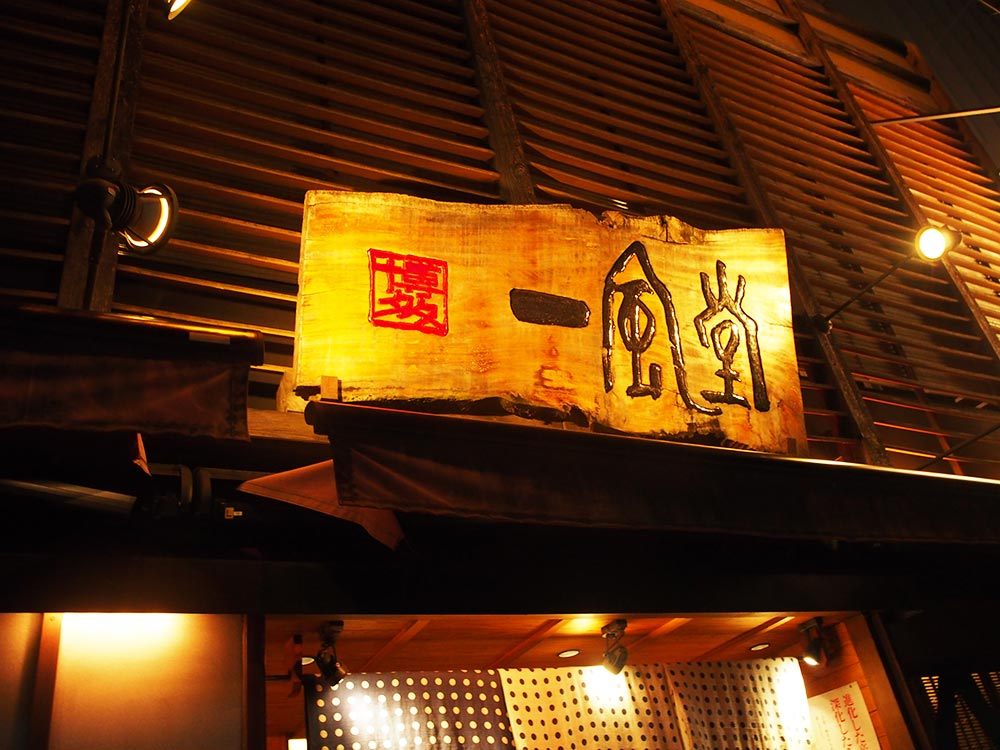 Even Fukuoka locals (known for their love of Ramen) recommend the King of Ramen, 「HAKATA IPPUDO」 .

In Fukuoka everybody knows IPPUDO, the king of Ramen. They opened their first shop in 1985 in Fukuoka. Due to its popularity, branches spread all over Japan. Now they are even overseas.

This time I visited IPPUDO Yakuin branch, a 3 minute walk from 「Yakuin-Odori」 station in Fukuoka city. This branch welcomes families with children too, it’s quite roomy inside.

There are 2 signature bowls of Ramen. First「Shiromaru Motoaji」has a rich and at the same time light flavour. The other bowl is 「Akamaru Shinaji」 which has a rich flavour with a nice spicy kick.

If you love spicy food 「Karaka-men」 is highly recommended.
You can choose how hard you want your noodles. There`s 「Futsu 」(medium),「kata」 (hard), 「Bari kata」 (super hard), and 「Konaotoshi」.
Let me explain「Konaotoshi」. Kona means flour in Japanese, so it literally means to boil the noodles just enough to shake the flour off the noodles. You can imagine how hard the noodles would be? To this day I’ve never seen someone order Konaotoshi noodles.

This is the 「Special Shiromaru」 ¥980. It`s IPPUDO`s original recipe. It comes with extra toppings of 2 slices of pork, seaweed, and flavoured soft boiled egg.
The silky soup is matured for an entire day after simmering for 18 hours. I can taste the Tonkotsu flavour but it`s not so heavy.

For the Shiromaru bowl they use a special noodle cutter called a Maruba Mensen 26 to cut the noodles thinly just to match their soup.

Thinly sliced chashu pork is amazing with the soup.

This is the Akamaru special (¥1080)
A rich and powerful soup, topped with homemade fragrant oil and special spicy miso . They blend 5 different types of chilis for Special spicy Miso. You can tell they are very particular about this miso. I don’t usually like spicy things but I could still enjoy this flavour, so it’s not super spicy.

For the Akamaru bowl, they use special noodle cutter called Kakuba Mensen 22 to cut the noodles a little thicker than the Shiromaru noodles.

They closely calculate the thickness of noodles to match their soup. The results are fabulous!

On the table, there is complimentary Ramen Dashi(broth).
You can use it if you ordered Kaedama(An Extra serving of Noodles) or just to add more flavour to your soup.

Hakata-style One-bite Gyoza(¥400), The photo above is a half order (¥220)
In Japan, generally speaking, we like a side order of Gyoza with our Ramen. A thin, bite-size dumpling fried until it`s crispy.

Ontama Nose Gohan( Poached egg rice bowl) ¥260
Fukuoka is known for their poultry farms. It’s a luxury to have a fresh poached egg on your rice with special soy sauce.

On the table, you will have complimentary 「Garlic」, 「red pickled ginger」, 「Pickled Mustard Leaves 」 , and 「spicy bean sprouts」. They all play excellent supporting roles for IPPUDO. Make sure you try them as well.

Yakuin branch is open until 2am (On Sundays and Holidays until midnight).
Why don’t you go eat there after a long day of sightseeing.

Writer：malimo
I love trying out the shops with high reputation or restaurants that I'm curious about in Fukuoka and Nagasaki area.My only problem is that I tend to overeat.