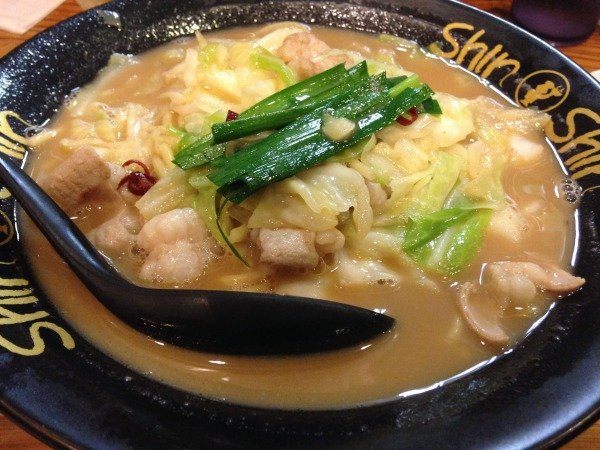 Indulge in a bowl of flavour-packed ramen at Fukuoka’s Hakata Ramen ShinShin!

As ShinShin has earned itself a solid reputation on the Fukuoka ramen scene, I had to go see what all the fuss was about. I went on a Friday night, and it was bustling with people, the line extending outside onto the street—as expected.

Motsu Champon Noodles "Mocchan" (890 yen).
Although this shop is famous for its ramen, their "Mocchan" (or offal noodles) is also rather popular. I recommend giving it a try as well!

Champon noodles are a regional dish which feature noodles that are slightly thicker than those used in ramen, and are topped with a variety of stir-fried toppings. The noodles are extremely flavourful due to being boiled in the soup, unlike ramen noodles which are boiled in water.

The umami of the offal, of which the dish is abundant with, is present in the soup as well, making for a rich and tasty mouthful! It’s like offal hot pot and champon noodles all in one! What more could you want!

Marinated Soft-Boiled Egg Ramen (700 yen).
This right here is authentic tonkotsu ramen (ramen made with pork bone broth)! The super-thin noodles, which are quite a rare sight even in Fukuoka, were scrumptious. Their menu is fairly inexpensive too, with ramen starting at 600 yen, and an extra serving of noodles for 120 yen.

Half Portion - Fried Rice (350 yen).
If you’re looking to add something more to your meal, how about a half portion of fried rice? The flavour isn’t overbearing at all and goes well with the ramen. Add fried rice to any bowl of noodles for only 250 yen!

Hakata Bite-Sized Gyoza (450 yen).
Hakata is famous for its bite-sized gyoza, but this shop’s are a little on the large side. Their chili oil is especially noteworthy, however, so make sure to douse them in it!

From food cart to popular ramen shop, ShinShin has come a long way thanks to their memorable dishes and loyal customers. If you're ever in Fukuoka, I urge you to jump at the chance to visit!

Writer：harukichi.
“harukichi.'s Fukuoka Select Blog” updates almost daily with detailed restaurant reviews. He may not have many materialistic desires, but his appetite is second to none! He dedicates his time to keeping up with the Fukuoka food scene.