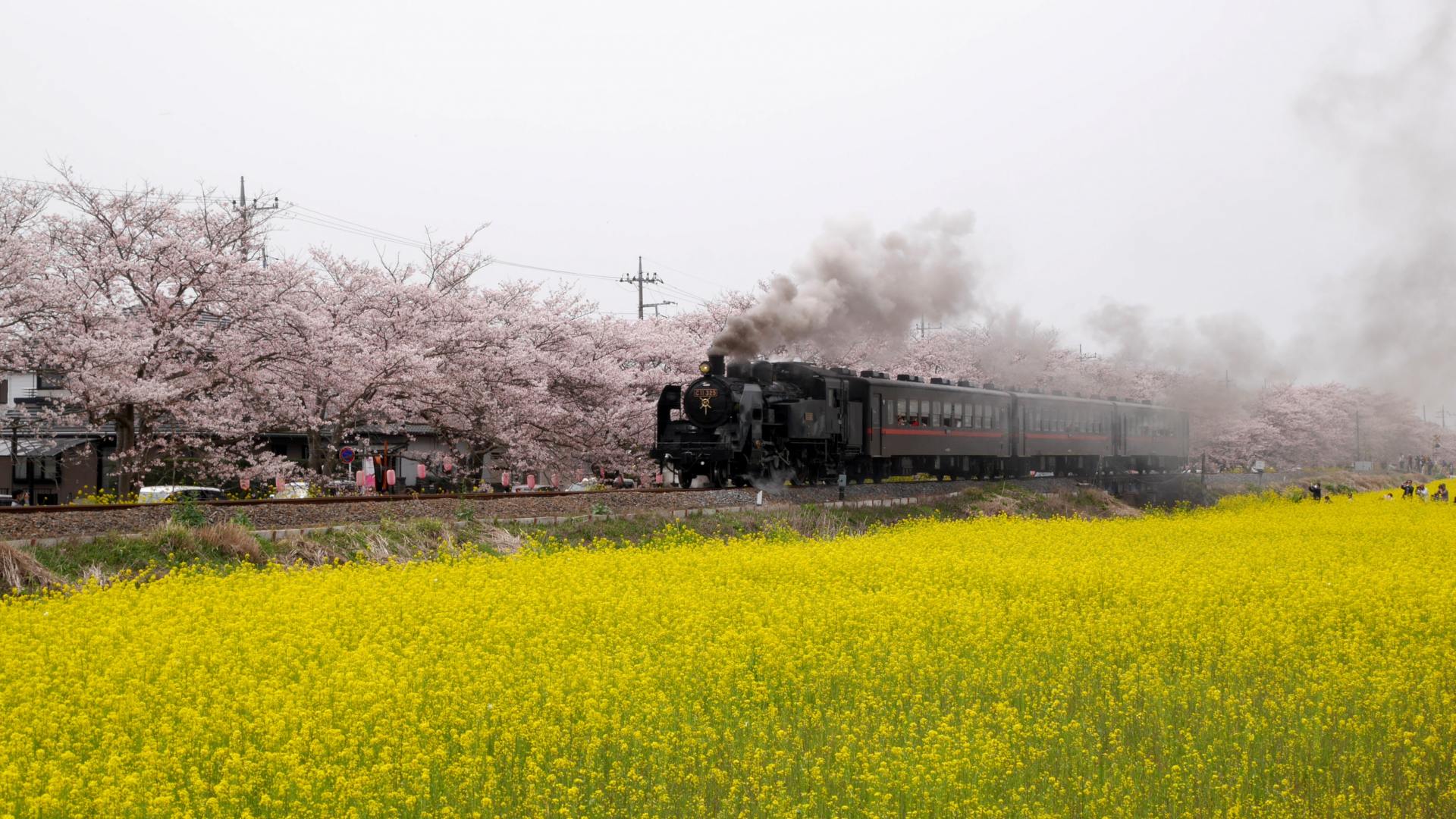 The Moka Railway is a local train line that spans 41.9 kilometers, from Ibaraki Prefecture’s Shimodate Station to Tochigi Prefecture’s Motegi Station. On weekends and holidays, the steam locomotive line, which makes one round-trip per day, offers a spring-limited special trip through the pink cherry blossoms and yellow rape blossoms. I highly recommend taking a trip through this area, as even those with no interest in railways can appreciate the scenery!

I’ve arrived at Kita-mooka Station, our first destination! If you look off in the direction of Nishidai Station, one stop prior, you can see long strip of cherry trees and rape blossoms.
Let’s walk along this row of cherry blossoms! (Map: A)

After passing the second railroad crossing from the station (Map: 2), I arrived at our goal. Even when I arrived, 45 minutes before the main event (or main course, if you will) happened, there were already many cameraman standing by waiting. Somehow, I managed to secure myself a spot without stepping on the toes of those who had arrived before me. Muscling your way into a photography shooting location is just asking for trouble. Also, be sure to not to put yourself in danger or disrespect your surroundings in any way, including going into the rape blossom field, stepping on the rape flowers, or approaching the railroad tracks.

At 10:44 and 10:54, trains bound for Shimodate and Motegi, respectively, flew on past. They were just a practice run for the “main dish” to come, though – an appetizer, so to speak.

And then...!! The steam locomotive’s whistle sounded off in the distance. Everyone’s tension building up was palpable.

And there it was!! Slightly behind its 11:15 schedule for passing through, our main dish arrived! This “C11 325” steam locomotive slowly made its way past, with yellow rape flowers on one side and cherry blossoms on the other. My hands were shaking from nerves when the time finally came, so please forgive the slightly out of focus photos....

This is the view from the tracks (Map: 4) towards Kita-mooka Station. Getting onto the tracks is strictly prohibited.

And this is the view from the tracks (Map: 4) towards Nishidai Station. This direction becomes a tunnel of cherry blossoms.

Onwards, to inside the “#1 Ebisu in Japan.” This huge 20-meter-tall statue certainly has an impact on you when you see it. It’s even holding a 5-meter golden carp.

When you make your way inside there, you’ll see a “Pot of Gold.” Supposedly, putting your wallet or the money you have on-hand into this pot and praying will grant you a boost to financial luck. It’s said that a lot of prizes are won in the area surrounding the shrine, with headlines like “300 Million Yen Jackpot Won!” Everyone here was frantically praying!

Since it was hot out that day and I was tired from all the walking I’d done, I decided to get lunch at the rest area within the shrine. I didn’t need to make any choices, as the only meal available was curry rice (400 yen). I also got a specialty beer (700 yen). The beer was “Kin no Shisha” (“Messenger of Gold”). The color is close to pure gold, and it uses 100% “Tochigi Malt” made in Tochigi Prefecture. It’s a locally crafted beer, made using offering water from this very shrine. Hopefully this helps me get a boost to my financial luck, both inside and out! As of right now in 2017, the luck hasn’t come to me yet, but....

I also prayed at the main shrine. Since health is more important than money (or so I believe), I prayed for good health.

After I finished praying, I went back the way I came (Map: C) until I reached the neighborhood. There I saw the “weeping cherry blossoms of Sakuragawa.”

Partway along the road is a pedestrian crossing, and from the top of it you can overlook the rows of weeping cherry blossoms from above. A long row of cherry trees grows right in the middle of the residential area.

If you walk about 10 minutes in the direction of Moka Station from the “weeping cherry blossoms of Sakuragawa” through “Nakanoshuku Park” (Map: D), you’ll reach the location of the “Gyoya River Cherry Blossom Festival.” (Map: E)

Returning to the field of rape flowers, around 15:15 I took pictures of the steam locomotive on its way back to Shimodate. If the weather would have been clearer, I think my shot would have turned out better, but it’s hard to get the flowers in full bloom (a period of about one week), the locomotive to be running (only on weekends and holidays), and the weather to be clear all at the same time.

After that, I decided to finally take the train from Kita-mooka Station to Mashiko. From my view from the front of the train, it was like running through a tunnel of cherry blossoms. I shot a video too, so take a look!

▼Video of Cherry Blossom Tunnel from Front-View of the Train

▼The Hometown of “Mashikoyaki” Japanese Ceramics

After passing through the tunnel of cherry blossoms, I got off at Mashiko, the northern limit of the free area granted with the “Joso Line-Mooka Line One-Day Free Pass.”

Mashiko is famous for its production of a type of ceramics called “Mashikoyaki.” Right near the ticket gate was a huge example of Mashikoyaki. There are also cafes and shops where you can buy Mashikoyaki within 2 kilometers of the station.

Inside the facility, which has no admission fee, you can do things like get into the conductor’s cab and see what it’s like in there! You can also enter old-fashioned passenger cars that are carefully preserved.

How would you like to take a trip like this to see railways and cherry blossoms, with a bonus splash of financial luck?

▼Sample Itinerary for a Trip from Tokyo to Mooka Railways

1: Purchase the “Joso Line-Mooka Line One-Day Free Pass” ([A] Adults 2,300 yen, children 1,150 yen) at ticketing windows of Kanto Railway Joso Line’s Moriya Station. If following the above itinerary, this pass will save you around 2000 yen and you will not need to purchase individual tickets along the way, so it is highly recommended.

[A] This free pass allows holders to freely get on and off of the Kanto Railway Joso Line and the Mooka Line for one full day on weekends and holidays. It can also be used on weekdays April 1st-May 31st, July 1st-August 31st, and November 1st-January 31st.

3: Walk around the city of Mashiko.

4: Visit “SL Kyu-roku-kan Museum” in front of the station.

A separate fee of 500 yen is required to ride the Mooka Railway’s steam locomotive (all seats assigned). Tickets are available at Mooka Railway’s station and at Midori no Madoguchi ticket offices in JR East stations.