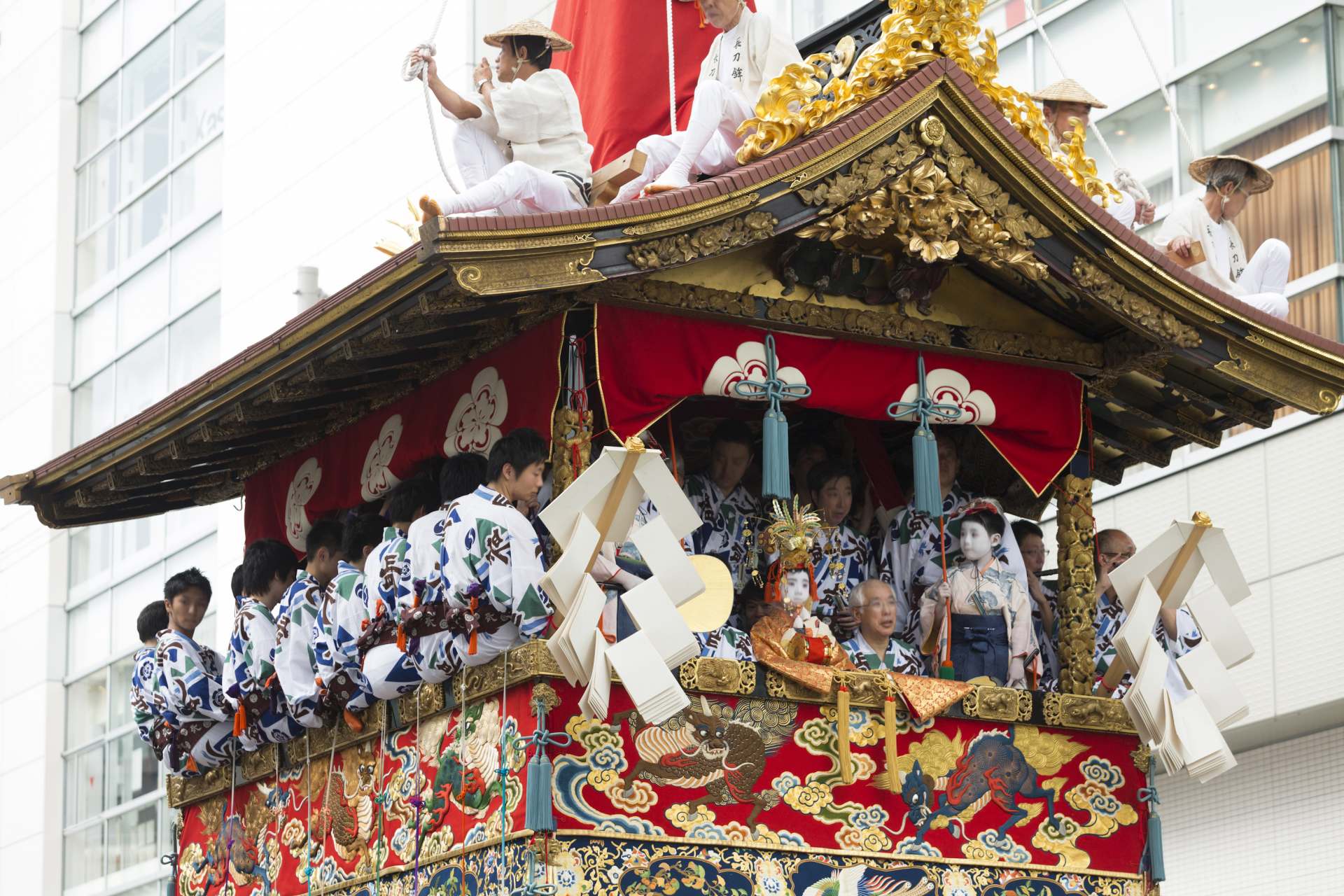 Gion Matsuri in Kyoto – One of Japan’s 3 Greatest Festivals

Gion Matsuri is a religious celebration of Yasaka Shrine, located in Higashiyama-ku of Kyoto City. The festival has its origins in Shinto rituals conducted to ward off the epidemic that plagued Kyoto in 869.
A variety of rituals and events are held across the month-long festival, which lasts from July 1st through the 31st every year.
This article will introduce “yoiyama” and “yamaboko junko,” two of the top events during the month-long festival. The “Kyoto Gion Matsuri Yamaboko Gyoji” is a registered UNESCO World Intangible Cultural Heritage.

Every year, large floats called yamaboko parade through central Kyoto for around 2 hours, with 23 out on July 17th (the “saki-matsuri,” former parade) and 10 out on July 24th (the “ato-matsuri,” latter parade).
Each yamaboko is decorated with its own unique and lovely designs, and they are sometimes referred to as “moving museums.”
It is said that they collect misfortune as they make their rounds, so after the parades end the yamaboko are immediately disassembled.

This is one of the “hoko” floats. It stands 25 meters tall and weighs over 12 tons.
It has a long, spear-like extension on its roof. People playing music ride on the second story of the float.

The Chigo Riding on the Naginata Hoko is a Must-See!

This float, “Naginata Hoko,” makes its rounds every year during the saki-matsuri, and on it rides the “chigo” (a boy between 8 and 10 years of age) who represents a living god and two children to serve as the chigo’s retainers. After the chigo performs the “shimenawa-kiri,” the festivities begin.
The shimenawa-kiri is a ceremonial ritual in which the chigo uses a sword to cut through the shimenawa, a sacred rope, which symbolizes breaking through the border to the realm of the gods of Yasaka Shrine.

This is one of the “yama” floats. All of the yama floats are decorated with pine trees.

Shintai dolls, believed to house the spirits of gods, ride upon each yama float.

On the second part of the procession, the floats must turn.
By laying down bamboo slats and wetting them with water, it is possible to turn the several-ton yamaboko floats.

Yoiyama, When Kyoto’s Nights are Most Lively

Yoiyama is the name for the three days before the yamaboko junko that happen on the 17th and 24th.
During yoiyama, you can see the decorated yamaboko up close in person.
Paper lanterns are hung from the yamaboko, and it builds up the festival atmosphere.
Enormous amounts of people gather during the evening, so you should aim to go during the day.

※We recommend visiting the saki-matsuri yoiyama, as more yamaboko will be out, and there will also be stalls set up to enjoy!

“Chimaki” is a specialty product for Gion Matsuri. Unlike the food of the same name, this chimaki is an evil-warding charm made out of bamboo leaves.
Each yamaboko has its own chimaki that serve different purposes, such as “warding of sickness,” “good fortune,” and “safe childbirth.” These chimaki are sold exclusively at Yasaka Shrine and each yamaboko during the annual Gion Matsuri. In Kyoto, many people adorn the entrances to their houses with chimaki.

The enormous wheels and the float’s framework are all held together with just rope, without using a single nail.
During yoiyama, some yamaboko will let people climb up to the top if they purchase a chimaki!

One more parade, the “hanagasa junko,” takes place on the 24th during the ato-matsuri.
Around 1000 people, including women, warriors, geiko, maiko, and children carrying mikoshi, all who wear flower hats, participate in this event.
It is a spectacular procession packed with children and women.