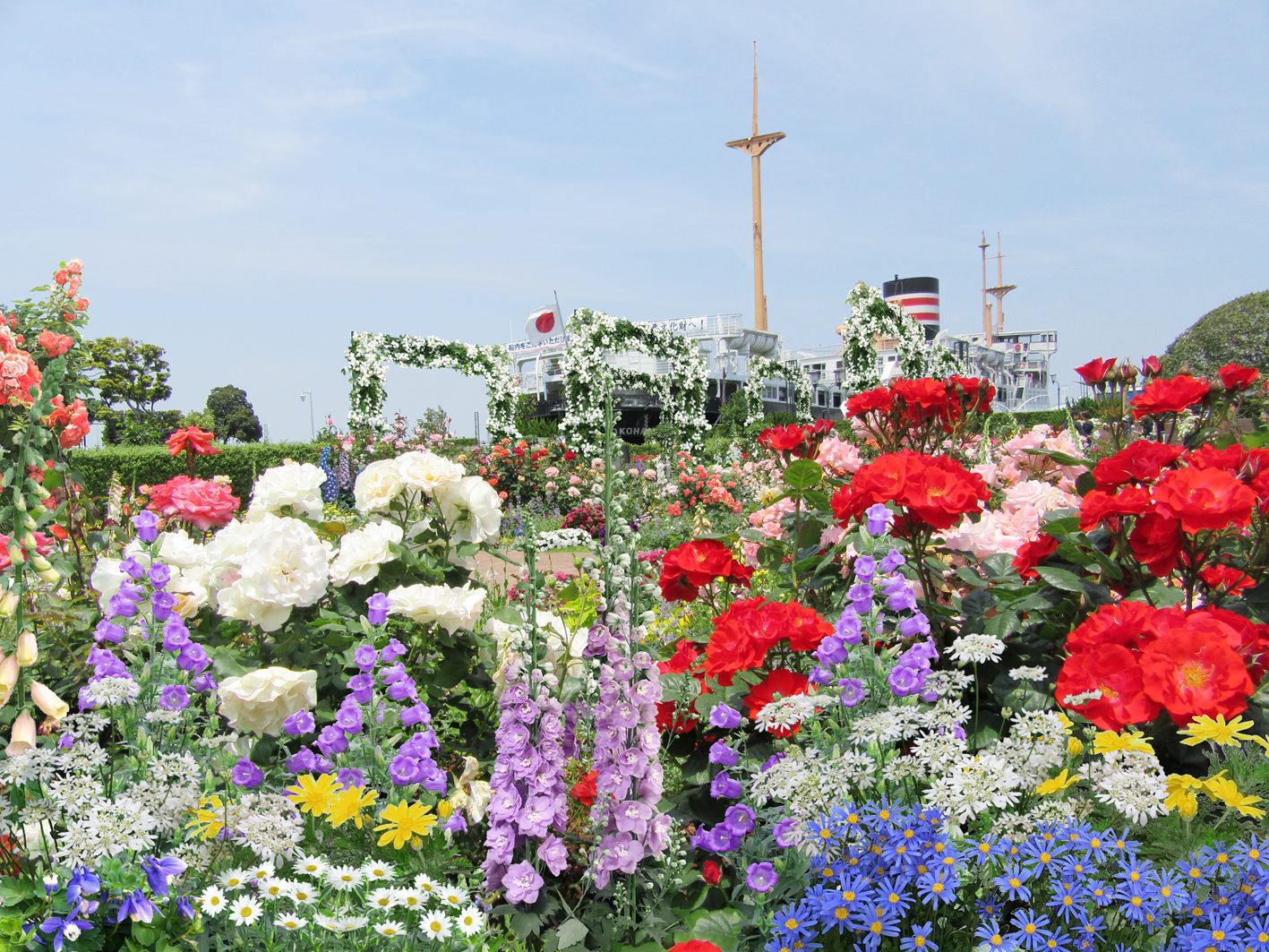 For international tourists, wouldn’t that be interesting to visit “a big free-admission event in which 100 million flowers and trees decorate a whole city”?
Well, the festival we are talking about is called “33rd National Urban Greenery Fair Yokohama”; centrally located in Yokohama City and this year in 2017, it will be held during the limited period of March 25th (Sat) to June 4th (Sun). We are going to talk more about its details, so if you are going to visit Japan during this period, don’t miss it out!

In this article, we will talk about charms of the “33rd National Urban Greenery Fair Yokohama” in 4 different parts;

1. What is the National Urban Greenery Fair about?”

The National Urban Greenery Fair was started in 1983. The event’s goals are to encourage people to embrace values of nature (trees and flowers), to protect nature and also to proceed community building that grows with comfort and prosperity of having nature. The festival is held in different city every year.

2. This year’s Garden Necklace Festival will be held in Yokohama City.

2-1 About the charms of Yokohama

The 33rd festival this year will be held in “Yokohama”, which is about 30 minutes from both Tokyo station and Haneda Airport. Yokohama is one of the cities that developed as an entrance for ocean route when Japan was going through modernization. As a result, the charm of the city today is its mixed culture of the West and East.

In terms of tourist destinations, Yokohama offers a lot including “Yokohama China Town”, which is packed with lots of Chinese restaurants and “Yamashita Park” and “Harbor View Park”, where you can totally relax viewing a harbor. In addition, you can also visit “Yokohama Red Brick Ware House”, where you will find many gourmet restaurants and also knick-knack shops in retro-air buildings. There is also “Yokohama Hakkeijima Sea Paradise”, an aquarium with four different parts offering various attractions including dolphin shows.

“33rd National Urban Greenery Fair Yokohama” (nicknamed as Garden Necklace YOKOHAMA 2017” is consisted of 2 main venues and 7 partnered venues including Sankeien, Hakkeijima, and Yokohama English Garden. During the fair, 3 kinds of themed flowers including cherry blossoms, tulips and roses decorate the whole city. In fact, roses are symbolic flowers of the city, first introduced to the city when its harbor was opened.

3. What’s in “Minato Garden”; the central area of Yokohama?

Three locations that we recommend as hot picks for a visit in Minato Garden, a central area of the city by the ocean!

At “Future Rose Garden”, you can be indulged in beauty of Yokohama’s symbolic flower; roses. Being among approximately 190 kinds, 2,600 stems of roses is definitely astonishing. What’s more, there will be also 12 kinds, 100 cherry blossom trees in containers that will welcome you. Also visit at night when flowers and trees will be lighted up creating different atmosphere from daytime.

During the festival, 200m long “Nihon Odori” lined up with buildings such as Kanagawa prefectural office will be colored by spring flowers such as cherry blossoms and tulips.

At Grand Mall Park, which is located in a newly developed part of Yokohama, Minato Mirai area, an artistic space of lights and sounds by the world-famous ultra-technologist group “team Lab” will be created. An exhibition of “Koo-suru Kigi (Reacting Trees)” that reacts to movements of people through changing colors of lights and music will be shown along 210m street. What’s more, an exhibition called “team Lab Crystal Fireworks”; 14m high fireworks made with countless dots of lights operated through smartphones will be shot up in the sky. The show of lights and sounds along with the official theme song of the Yokohama Fair “Kimimatsu” (by GReeeeN) will be performed every day.

2. At “Yokohama station”, get on JR line or Yokohama Metro Subway blue line and travel to either “Sakuragi-cho station” or “Kannai station”. From these stations, each venue is in walking distance.

4. What is in nature-rich “Satoyama garden”?

Three points that we; the editors team recommend for “Satoyama Garden”, located in the inland side of the city.

One of the biggest flower beds in the Yokohama fair created in 10,000 square meters space. Walk through representative flowers of the season such as pansy, viola, tulips and cherry blossoms. The flowers used are all grown in Yokohama City as well. In addition, the astonishing scale of the bed really stands out in pictures too, so why not upload them on your SNS to see how many people happily react to them?

An athletic course that will give you exhilarating feeling gliding through rows of trees. It does not have too often in our daily lives to observe forest from above, so this is guaranteed to be one memorable experience for you. Given that it is safely organized, the activity is also recommended for kids. Why not develop stronger tie with your kids while enjoying the athletic activity (charge applied. Advanced reservations are required)?

“Glamping” is a kind of activity that’s getting popular in Japan. Glamping is a made-up word that combined “Glamorous” and “Camping”, At Satoyama Garden, you can experience activities such as “MORI café” in the woods and also a tree tent. Also, if you make a reservation, you can join special programs such as Dutch oven class, smoke class and leather chair making workshop (charge applied to some programs. Advanced reservations are required).

Also, near Satoyama Garden, there is “Yokohama Zoo Zooracia”. The zoo is divided into 8 different zones by the types of climates such as Asia and Africa. In each zone at this unique zoo, actual dwellings of animas are duplicated, and there are also a lot of rare kinds of animals raised on site. Though is it a bit of travel from the central area of the city, “Satoyama Garden” is a must-go spot that’s worth your travel time!

Yokohama has been always known as an attractive place to visit offering wide range of activities for those seeking for gourmet, travel and shopping experiences. To add to that, there will be this fascinating event held in the city between March 25th and June 4th this year, as introduced in this article. These things combined, Yokohama is a must-go place this spring that is fairly accessible from Tokyo, and we hope you will have a chance to visit.

[General Information about the Event]