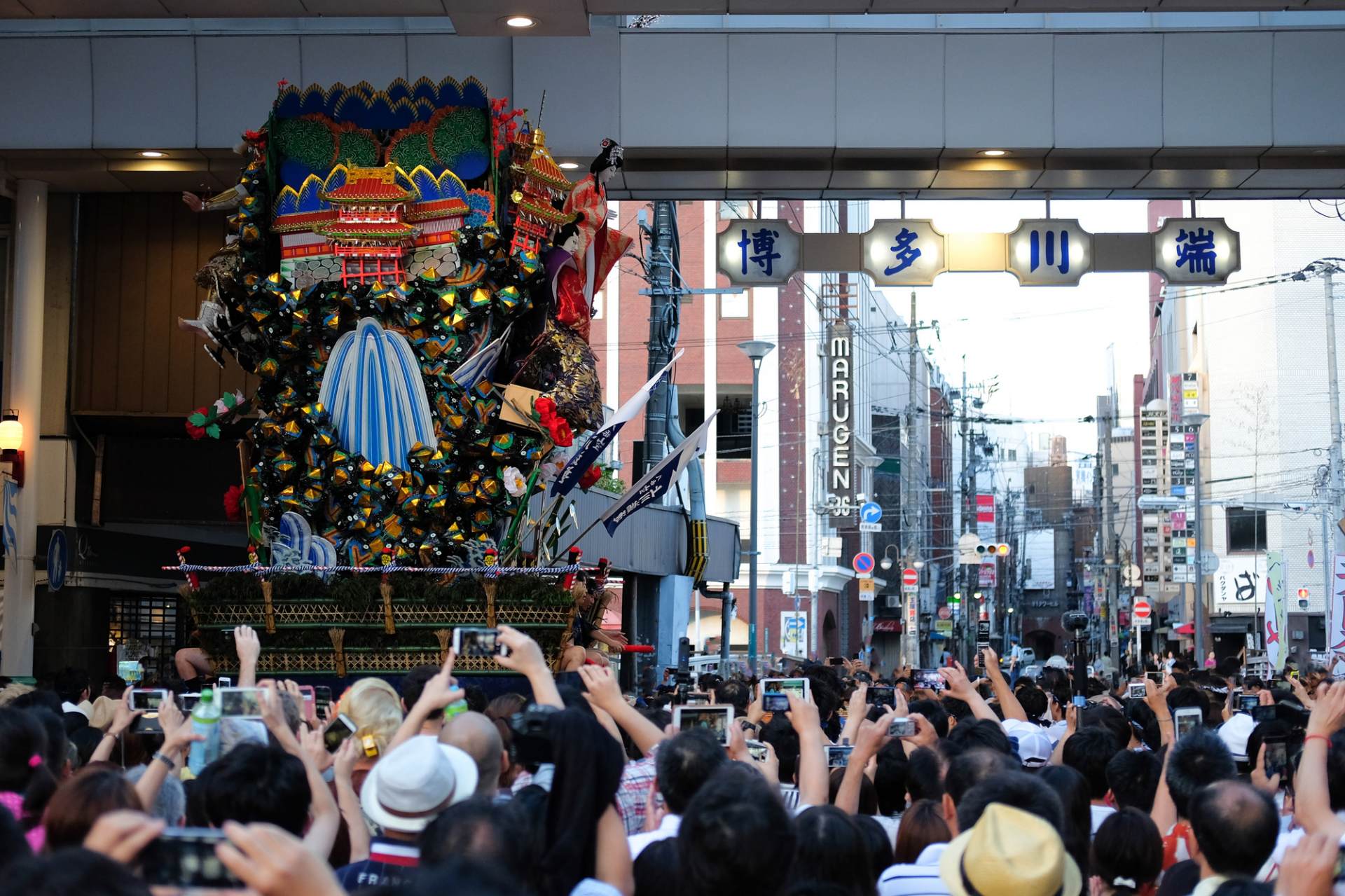 A Festival Registered as a UNESCO World Intangible Heritage in 2016

Hakata Gion Yamakasa is a Shinto festival of Kushida Shrine in Fukuoka City’s Hakata-ku. The festival’s formal name is Kushida Jinja Gion Retsu Oomatsuri.
It is a powerful festival, where a large number of men carry wheel-less mikoshi shrines on their shoulders throughout Hakata-ku.
There are various theories on the festival’s origins, but supposedly it began in 1241 when holy water was sprinkled across town from atop a float to drive away an epidemic.
Various events take place every year from July 1st through the 15th. Here we will introduce some of the highlights, like “Oiyama,” “Oiyama Narashi,” and “Shudan Yamamise.”

Oiyama is the name of a time-trial event, in which groups carrying 3-meter-tall floats called “kakiyama” that weigh around 1 ton each race along a 5-kilometer course. There are 7 teams, divided by districts.
On the last day of the festival, at 4:59a.m., the first team to start the race sing the “Hakata Iwai Uta,” and then start their run at 5:00 after they finish singing. After that, the remaining 6 teams start the race one after the other in 5-minute intervals.
Teams can reach the goal in just a surprisingly short 30 minutes.
The time scores are divided into the first 112 meters’ time, called “Kushida-iri,” and the time for the entire course. The most heated portion, “Kushida-iri,” is nearly impossible to see without acquiring a ticket in advance. These tickets are notoriously difficult to get your hands on.
Wherever you stand along the course, spectators will be splashing water onto the participants, so be sure to keep your camera and valuables safe by storing them somewhere waterproof, like in a plastic bag!

We recommend seeing the “Oiyama Narashi” for those unable to make it to the Oiyama itself!
Oiyama Narashi is like a rehearsal for Oiyama, and it is roughly the same aside from taking place on a slightly shortened 4-kilometer course.
The time trial event still takes place, and participants take it as seriously as the main event.
It starts at 3:59p.m., so it’s a more easily accessible time. The number of spectators is also comparable to the main event.

This is an event to show off the “yamakasa” floats.
All 7 yamakasa start at “Gofukumachi Intersection,” follow Fukuoka City’s major street “Meiji Dori,” and finish the 1.3-kilometer march in front of the Fukuoka City Hall.
While at City Hall, they greet dignitaries, then follow the same route back through Meiji Dori. 4 of the yamakasa stop by Kushida Shrine after Shudan Yamamise, so we also recommend waiting for your chance to see them at the shrine.