You get to feel like a daimyo!? Take a private sightseeing tour by boat around the moat of Hikone Castle, a national treasure.

Japanese castles were built by daimyo (feudal lords) in the domains they governed. With the beginning of the Edo period, in 1603, and the peace it ushered in, Japanese castles which had been built during wartime as defensive strongholds became symbols of samurai rule. From the keep at the center of the castle, the stone walls and turrets for defense, the gate, the governing quarters, and the samurai residences to the defensive moat dug around the castle, Japanese castle architecture is both rich and spectacular.

The boat that goes around in the moat has been reconstructed to look how it did in the past!

Construction began on Hikone Castle in 1604 and more than 400 years have passed since it was completed. It incorporated structures and stone walls from castles in the surrounding area that fell during wartime, and as such is known as a "recycled castle." You can take a private sightseeing tour around the castle moat in a reconstructed boat once reserved for use by daimyo! Viewing the unique stone walls, wooden bridges, the keep, and turrets that come into and go out of view, you can experience the unchanged style and air of the Edo period.

The boat that the daimyo used when inspecting his territory, or when entertaining other daimyo, has been almost perfectly reconstructed from existing documents and photos taken around 1863. You can take a sightseeing tour in Hikone Castle's inner moat on this boat that only high ranking officials would have been allowed to board. The boat seats 11 adults.

Come on this cruise that takes about 90 minutes to go around the moat!

This 90 minute boat trip sets out from in front of Genkyuen Garden near Hikone Castle. Up to 11 people can board the boat, and you can dine on the boat with a reservation (reservations accepted from 8 people), allowing you to spend a wonderful time on board. You can also bring your own drinks including alcohol. If requested, a guide can explain various things inside the castle visible from the moat. Also, it is quite surprising that the moat's stone walls are original constructions that date back over 400 years.

Experience what it feels like to be a daimyo on a private boat available for scenic sightseeing in all seasons!

In spring and autumn, private daimyo experience tours are also available in the evenings when the castle and moat are lit up. Taking a cruise at night with the cherry blossoms or fall leaves lit up is an exclusive pleasure only available with private reservations. Taking in the scenery while aboard a boat for a daimyo in the moat of the castle is sure to be a special memory of your trip to Japan! How would you like to experience what it feels like to be a daimyo from the past? 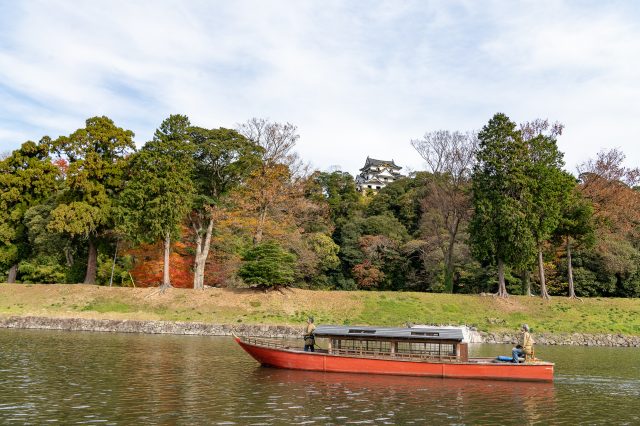