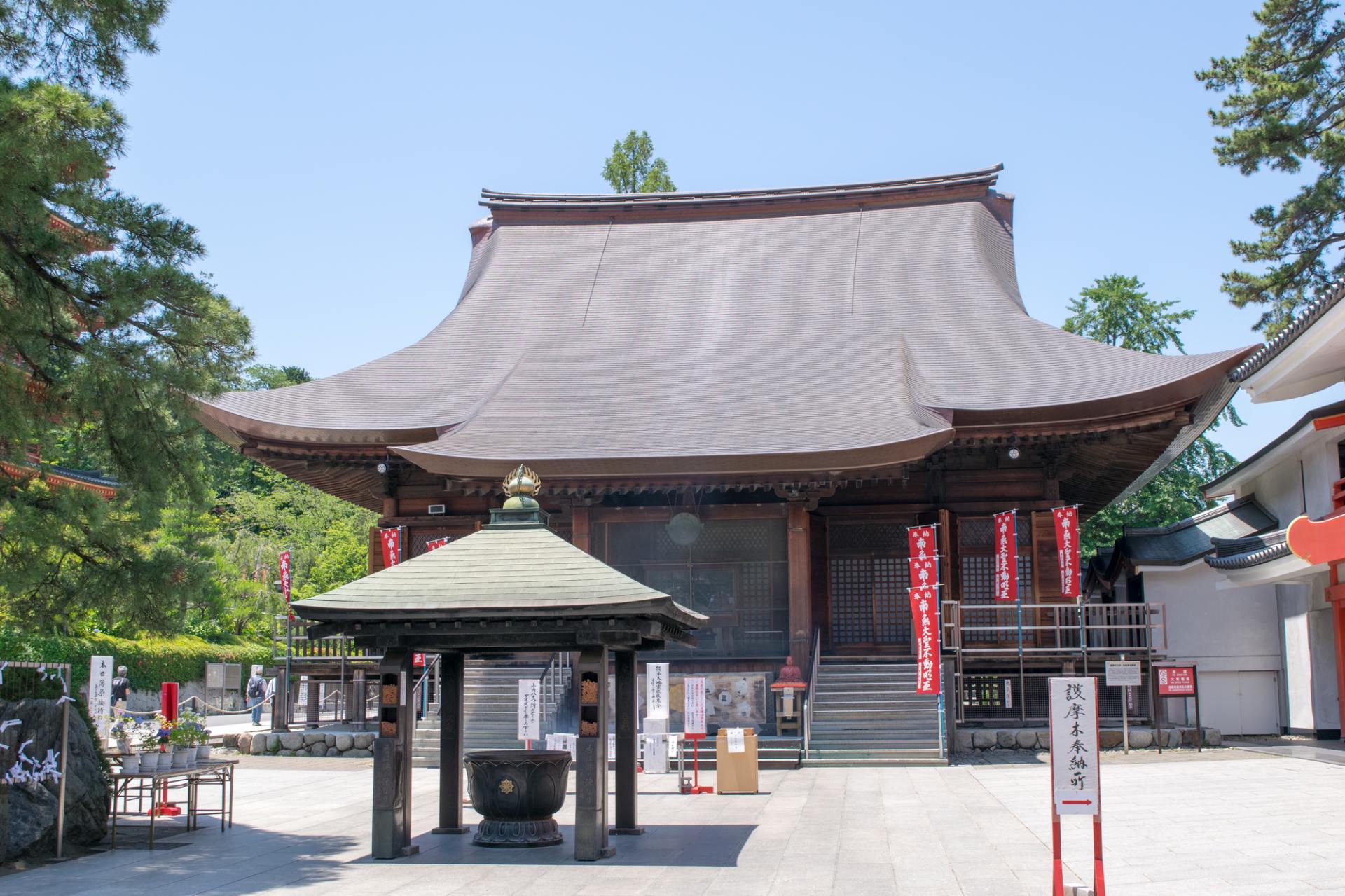 Housing of the three largest statues of the Buddhist Wisdom King in the Kanto region and the God of traffic safety, this is the family temple of Shinsengumi's Hijikata Toshizo

Along with Narita-San Shinshoji,, Takahata Fudoson is one of the three largest temples housing an immovable statue of the Wisdom King in the Kanto region. It is the special head temple of the Shingonshu sect, Chizan school of Buddhism.
Every year, about 300,000 visitors come for the first temple visit of the year. It's also crowded on the 28th of every month, when many visitors come for temple festivals, which are believed to bring them divine blessings.
Added to an area of approximately 13,240 square meters inside the temple grounds, the surrounding hilly woods makes it a vast site of about 99,300 sq. m. In addition to annual events such as a good-luck bean-throwing festival in February, visitors may also enjoy the nature of each season, with festivals celebrating hydrangea flowers in early summer or red maple leaves in autumn.
Inside the temple grounds, there are about 20,000 important cultural assets and temple treasures. Among these are Fudodo, the hall housing the immovable King of Wisdom, Niomon Gate with statues of Buddhist guardian gods called "Nio" installed on the left and right, and Joroku-Fudo-Sanson, a giant statue of a Buddhist triad weighing over 1100 kilograms.

Name in Japanese
高幡不動尊
Official Name
Takamine San Myojin Kingoji (高幡山明王院金剛寺)
Founded
The early Heian Era (various stories exist)
Postal Code
191-0031
Address
733 Takahata, Hino City, Tokyo
Telephone
042-591-0032
Admission
Free inside the temple grounds (Okuden: 300 yen; Dainichido: 200 yen)
Closed
No holidays (On Mondays, the Okudono and Dainichido halls are closed to visitors.)
Hours
from 7:30 am to sunset (Okuden, Dainichido: from 9:00 am to 4:00 pm )
*Note: The temple is not usually illuminated at night.
*Note: The schedule may be changed for the New Year's holiday or other events.
Access
(1) About 3 minutes in for from Takahata Fudo Station on the Keio Line
(2) About 5 minutes on foot from Takahata Fudo Station on the Tama Monorail
Official Website
Official Website (Japanese)