Kaminari-mon, the "Thunder Gate" and central landmark of Asakusa.

In Asakusa, you can really sense the good old age of traditional Tokyo. Asakusa is highly popular as a place where one can experience authentic Tokyo.

The famous landmark of Asakusa: Kaminari-mon. It is said this "Thunder Gate" was constructed over 1000 years ago by a samurai general, to fulfill his desire for peace and prosperity. The gate suffered damages from several fires; its current form was donated by the founder of the famous Japanese electrical manufacturer, Panasonic. Its impressive paper lanterns, which are 3.9m high with a 3.3m diameter, and weighing about 700kg, are replaced every decade or so.

Passing through this massive gate, the commercial street Nakamise dori extends before you. It is one of the oldest commercial districts in Japan, filled with well-established shops and souvenir shops, bustling with activity day after day. You can buy traditional confections made right before your eyes, and enjoy it as you wander down the street. "Kanji T-shirts" for tourists from overseas draw the eye, but prudence is of essence, as some Kanji don't have such a cool meaning. Try asking the shop staff if you want to check the meaning of a Kanji.

Slipping out of the busy Nakamise dori, the "Treasure House Gate" Hozomon comes into view. From here hang gigantic "Waraji" (traditional Japanese footwear made from dried rice plants after the harvest) 4.5m high, 1.5m wide, weighing 500kg. It is said their purpose is to intimidate demons, by making them wonder if the temple is guarded by a god who wears these gigantic sandals.

We have introduced Asakusa from the Thunder Gate to the giant Waraji sandals; these all belong to the Asakusa temple. Constructed in 628, Asakusa temple is said to be the oldest temple in Tokyo. At the start of the Edo era Tokugawa Ieyasu chose it as his own government's temple, and it became a cultural center for commerce and entertainment. Also, highlights include the paintings on the roof of the main shrine, and the five-storied pagoda that rises from the temple grounds. At night, the buildings are brought to life with light. The 53 meter pagoda gleams stunningly. 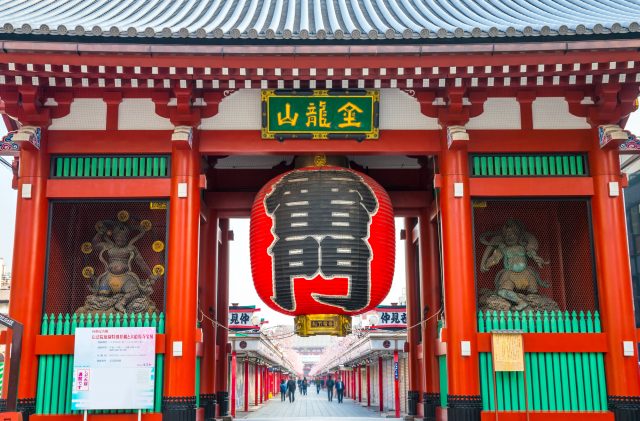 In addition, the standard of restaurants in the area is very high to the extent that they draw attention from the media! There are many stores of a high reputation, that have been well-loved by Japanese people since old times. We would especially like to recommend Tendon, a rice dish with deep fried fish.

"Tempura Daikokuya" restaurant is very popular. Their Tempura is not crunchy; it has a unique soft texture, leaving a different impression from other Tendon restaurants. With plenty of Tendon sauce, the bread-crumb batter coating compliments the rice outstandingly! Truly something you must experience in your lifetime. 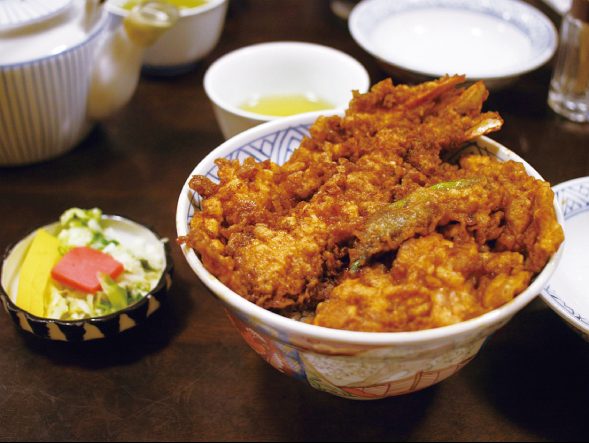 We definitely recommend travelling by Jinrikisha. They are pulled by strong workers who can guide you to recommended sightseeing spots and will take photos for you. Feel the wind in your face as you speed through Tokyo, creating unforgettable memories.

The neighboring station is home to the Tokyo Skytree, a global tourist spot and well worth a visit along the way.

Asakusa retains Tokyo's original colors. We would love you to take a visit there! Even just half a day will leave you with very special memories.