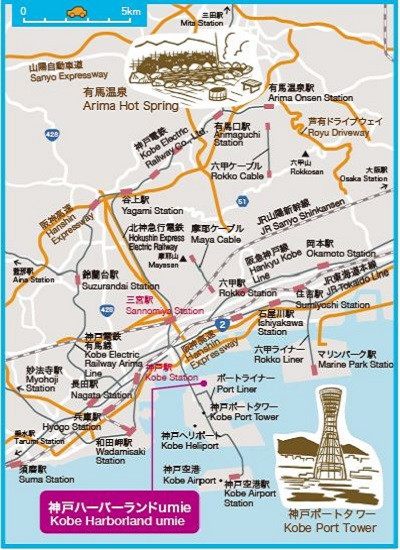 Kobe's charms include mountains, the ocean and the harmony of its refined cityscape. Enjoy shopping at Kobe Harborland umie! 【Cooperated by Aeon_ Kobe Area edition】

Including approx. 600 general merchandise stores throughout the nation (as of 2014), AEON Group offers various types of shops. This serial article introduces stores of AEON Group all over Japan, along with the attractions in the surrounding areas. In this article we will talk about Kobe Harborland umie.

▼ Kobe, where one can experience the ocean, the mountains and the city all at once
從JR「新大阪站」大約30分鐘即可抵達神戶。這裡擁有被大海和山岳圍繞的大自然，擁有被異國情調洗練的街道，歐洲風格的建築物林立，根據不同地區有不同的美景。特別是從高山上，在夜晚從摩耶山的眺望被列為日本三大夜景。可以通過纜車或吊椅登上摩耶山，作為戀人的夜晚約會非常合適。

One Kobe landmark is the Kobe Port Tower, which is 108 meters tall and was built in 1963. The heart of the city is called Sannomiya, and many train lines run through it, including those of Japan Rail. Also, Motomachi, which is comparatively close to Sannomiya, has an arcade and many long-standing shops. Near Motomachi is Kobe's Chinatown, one of the three largest in Japan.

▼ Whether you want to enjoy shopping or dining, Kobe Harborland umie has everything you'll want
Kobe Harborland umie opened in April 2013 in the tourist attraction Harborland, which has been famous in Kobe for 20 years. It is made up of 225 specialty shops, if one includes the main NORTH MALL and SOUTH MALL, as well as MOSAIC, which is next to the ocean.

In addition to the shopping — for food, cosmetics, fashions, interior design elements, miscellaneous goods and more — the large food court with 800 seats is also appealing. It would be fun to bring ramen, udon, Chinese food or anything else one wanted to eat to a table and share it.

It's easy to get to as well. It's just a five minutes' walk from JR Kobe Station and an eight minutes' walk from the Kobe Municipal Subway's Minatomotomachi Station.
Make memories that will last a lifetime at this superb location looking out over the Port of Kobe!