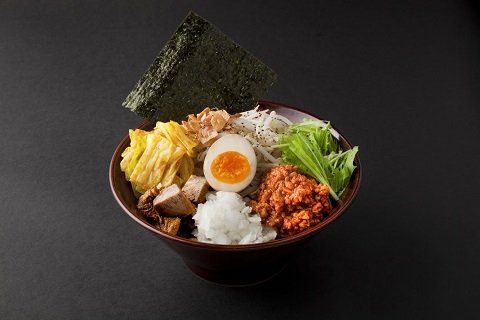 Many people wish to try Japanese-style ramen noodles when they visit Japan. Ramen is usually categorized by different types of soups. The standard flavors of soups are soy sauce, salt, miso paste, etc. Recent trends include even more various soups such as baitang (which usually indicates a cloudy soup cooked with chicken) and vege-pota (similar to vegetable potage soup), etc.

▼KOHMEN, a ramen restaurant introduced in this article, has a variety of menus from standard ones to limited-time only menus including Abura-noodle, which maintain its deliciousness without soup.

Among their menus, Tonkotsu flavored noodles has gained special attentions from tourists. The key of the popularity is its thick and rich flavor. As its name suggests, Tonkotsu (Ton: pork, Kotsu: bone) noodle soup is made with a pork broth soup that is flavored with soy sauce, miso, salt, etc. Each of them is called Tonkotsu Soy Sauce Ramen, Tonkotsu Miso Ramen, Tonkotsu Salt Ramen, etc.

This article introduces a ramen restaurant called KOHMEN, which Tonkotsu ramen is very popular. Established in Ikebukuro in 1995, the famous restaurant, also called a pioneer of Tokyo Tonkotsu ramen, has succeeded in maintaining the popularity since then. Currently KOHMEN has nine road-side stores in Tokyo. The fine flavor of their soup is surely the key of the popularity, but the wide range of menus and the opening hours (opens until late night) also the point that attracts many customers.

The most popular menu of all the ranges is Jukusei-Kohmen (￥780 including tax), a Tonkotsu Soy Sauce Ramen that represents the restaurant. The curly noodles match to a broth soup, which are cooked for 8-12 hours to extract tastiness and flavors off pork bones.

Other popular menus include Tsukemen noodles (￥830 including tax). Tsukemen’s noodles and soup are served in separate bawls, and you dip a small portion of the noodles in the soup before eating it. It is seen that many customers order ‘zenbu-nose’ (literally means ‘everything-on-top), which serves all kinds of toppings (roasted pork fillets, fried onion, etc.) on their noodles. As the volume is substantial, it is especially recommended to hungry people.

The weekday’s only special service is even better. Between the opening time and 24:00, one of the following side dishes comes with an order for any noodles. Side dishes that can be chosen from: flavored egg, large serving of noodles, small rice, almond jelly, and magical pudding (limited number is available, an additional ￥100 is charged for the pudding). The restaurant is the best recommendation to those who wish to enjoy Tonkotsu ramen in Tokyo!

The information on the other branch including Harajuku, Roppongi, etc. can be found in the following.