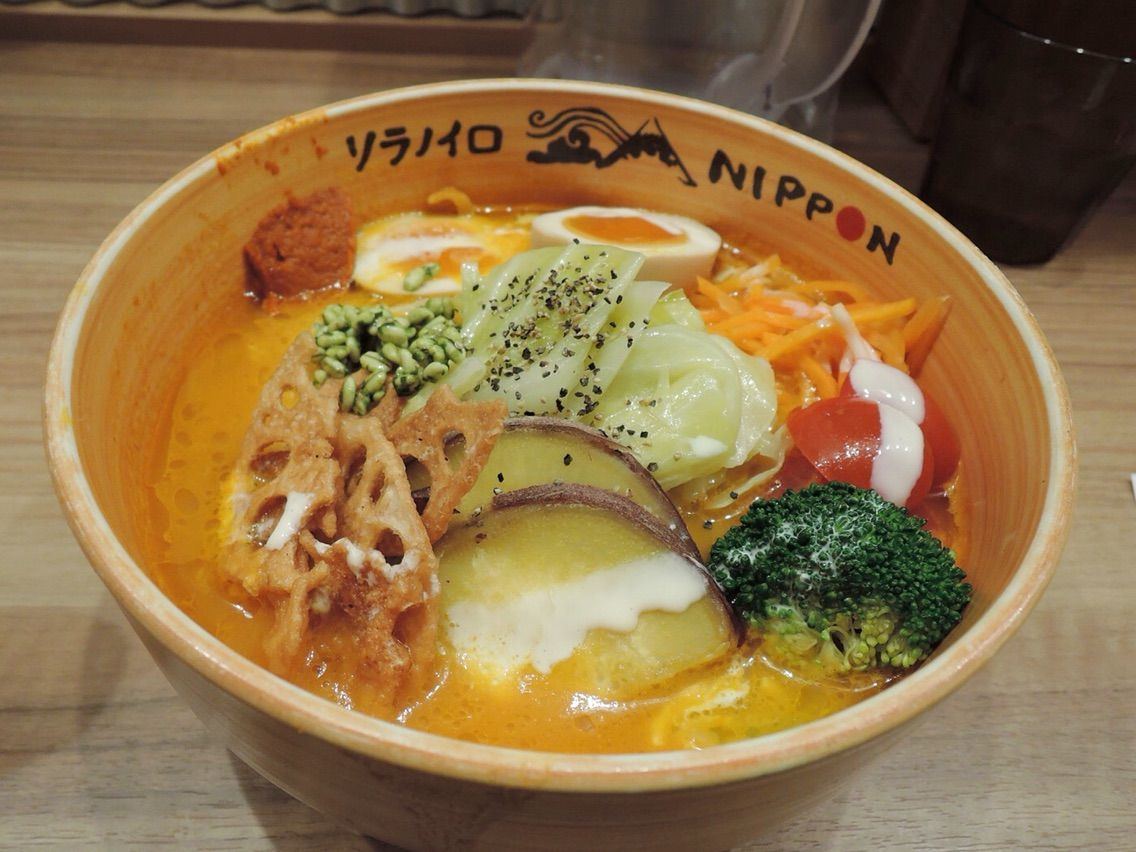 Look no further than Tokyo Station to get your ramen on! Tokyo Ramen Street, a grouping of 8 famous ramen shops, is located right inside the station. It was created in 2009 with the hopes of being the first place you’d want to go when coming to Tokyo. After much tweaking, the current lineup is so abundant with variety it has something delicious for everyone. Joining the lineup in June of 2015, I’d like to introduce you to the shop that everyone’s been talking about: Soranoiro.

Soranoiro’s main store, located in Hirakawa-cho, Tokyo, has garnered immense popularity for their original vegetable-based ramen. Having earned a mention in the Michelin Guide Tokyo in both 2015 and 2016, Soranoiro is well on its way to becoming one of Japan’s best-known ramen shops

The interior, which could easily be mistaken for a hip café, gives off a welcoming vibe, making it easy for anyone to enter. Aside from their famous veggie soba, they offer a simple shoyu ramen, shio ramen, and—wait for it—a dish that contains absolutely no animal products: vegan veggie soba! Keep in mind that in this case, “soba” refers to Chinese-style noodles, not the buckwheat variety!

I went ahead and ordered the special veggie soba with an added marinated hardboiled egg and extra vegetables this time.

There was a bit of a line at first, but the turnover was quick; I was inside within about 10 minutes. It was only another 5 minutes after handing over my meal ticket that a gorgeous bowl of special veggie soba was placed before me. The cabbage, sweet potato, lotus root, broccoli, and other vegetable toppings made for a colourful, impressive presentation quite unlike what you’d expect from a bowl of ramen.

The salt-based soup was surprisingly thick for being made mostly of pureed onions, cabbage, and carrots. The subtle taste of the mussel, scallop, kelp, and dried, smoked mackerel concentrate really seemed to add a layer of complexity to the flavour.

The chewy, orange noodles made with paprika powder were both tasty and exciting to try. And the aroma of paprika was pleasant, yet not overpowering.

You can also add some spicy miso into the mix if you want. It’s always nice to try changing things up halfway through.
If you aren’t planning to meet someone important afterwards, I suggest taking advantage of the large container of garlic chips on the table as well. The garlic complements the vegetables wonderfully!

The combination of the noodles, soup, and toppings is the product of an exhausting bout of trial and error—one that evidently ended in success! I urge you to give Soranoiro’s ramen a try and see what all the rage is about!