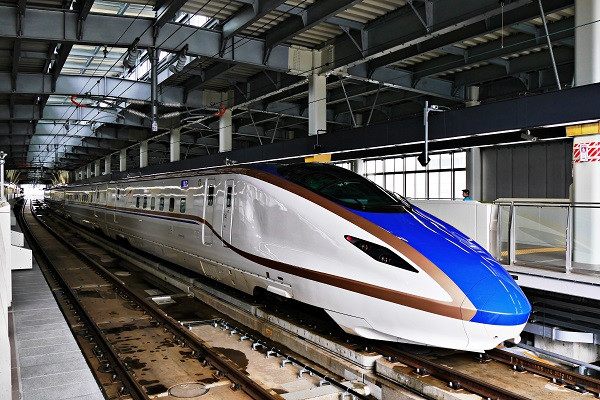 Kanazawa is the main city of Ishikawa prefecture. Ishikawa is located in the centre of Japan’s main island. This region is called Hokuriku. In 2015 Japan Rail started to operate the Hokuriku Shinkansen(bullet train) line. Now we can access Kanazawa station from Tokyo in only 2.5 hours!

So I went to Kanazawa from Tokyo by the Hokuriku Shinkansen. During the ride I read a book and enjoyed the view from the window. In what seemed like no time, I had arrived! 2.5 hours passed by so quickly.

Kanazawa station was listed as one of the top 14 「World’s Most Beautiful Train Stations」 by American travel magazine 「Travel & Leisure」.

「Hospitality dome」
The shape of the steel frame and glass dome implies an expression of hospitality, by extending an “open umbrella” for guests coming out of the station.

「Tsudumi gate」
The Japanese traditional drum(Tsudumi) was the inspiration for this gate.

I arrived at the Ohmicho Ichiba.

Ohmicho Ichiba is a market which hosts about 180 stalls and restaurants selling fresh fish and produce.

Kanazawa faces the Sea of Japan which means I can’t miss out on eating great Kaisendon(fresh seafood rice bowl). At this market many shops offer Kaisendon.

For my lunch today, I decided to eat at the 「Ikiikitei」.
They only have ten seats. It’s so popular, sometimes you have to wait an hour to get in.

ikiiki tei don 2,000yen. What a generous amount of seafood! So good!

I walked another 10 minutes from the market and arrived at the Oyama shrine.
The use of stained glass in the windows is a rare sight at a shrine. It’s a national and cultural treasure of Japan. It is so interesting and unique to see a western gate on a Japanese shrine.

「Kanaya shrine」 is located right next to the Honden(main shrine building).
The Samurai general Maeda Toshiie（1537〜1599） is enshrined here.

I visited during the spring but was fortunate enough to come across red maple leaves!

At the centre of Shinen(garden of the shrine) is a pond. Such a peaceful place to be.

A mascot character called 「Litakun 」appeared. (on the right)

「Litakun」 is the mascot character used to promote Kanazawa’s products and tourism . He often appears at tourist spots. Watch out!

Near Oyama shrine there are a lot of tourist spots such as Kanazawa castle and Kenrokuen garden (one of 3 Japan’s most scenic gardens). Don’t miss them if you are in the area.

Writer：kosu
While living outside of Japan for a while, I began appreciating what Japan has to offer. Now I travel in all over Japan to search for that good old Japanese culture and beautiful scenery in each season. It`s my intention to motivate my readers to actually experience the places I introduce through my articles.