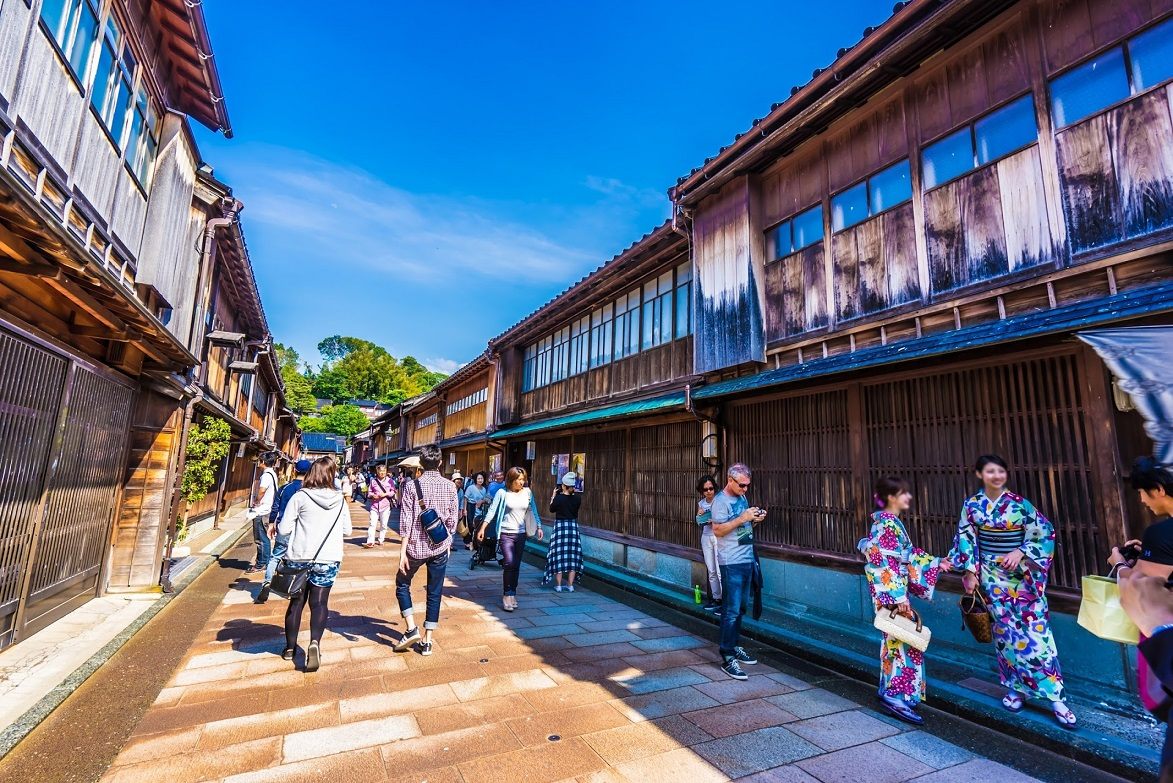 Kanazawa is the main city of Ishikawa prefecture. Ishikawa is located in the centre of Japan’s main island. This region is called Hokuriku. In 2015 Japan Rail started to operate the Hokuriku Shinkansen(bullet train) line. Now we can access Kanazawa station from Tokyo in only 2.5 hours!
This time I journeyed through Kanazawa’s popular tourist spots, the Higashi tea house district and the Kazuemachi tea house district.

Many people love to walk in these districts because there are traditional tea houses and small shops. Ochaya (tea house) is a sophisticated place of entertainment for people in high society. Geiko, who are dressed in Kimono, entertain guests by performing traditional dance and playing the Shamisen or by hosting Ozashiki-asobi (games with Geisha).

Yaoyoroz is a shop that sells select goods from Ishikawa prefecture. The selection ranges from miscellaneous goods to gifts and sweets. They even run a cafe there. It is interesting to see masterpieces created by local artisans and tastefully selected “genuine culinary utensils”.

The biggest reason I visited was to see and take photos of “Hyakuman-san”! Hyakuman-san was created to promote Kanazawa station when they started to operate the Hokuriku Shinkansen in March of 2015.

One part of the cafe is used as an atelier to make Hyakuman-san goods. I took some snapshots of Hyakuman-san the making in progress.

The main attractions of the Kazuemachi teahouse street are the two hills.
One of them is “Akarizaka”.

The other hill is called “kuragari zaka”. “Kuragari” literally means dark in Japanese. This hill is even dark during the daytime.

They say that many men used this way to avoid the eyes of others and sneak into the tea house district. When I reached the top of the hill, there was a big tree and vivid red Torii gates.

“Kaikarou” is the biggest tea house in Kanazawa

“Kaikarou” is the biggest tea house in Kanazawa. This place is open to the general public during the daytime as one of Kanazawa city`s cultural assets.
At night they only serve one group at a time. To get inside, you must be introduced by a regular guest. It’s not easy to get in!

There are cafes and souvenir shops as well. Popular items are luxurious Japanese sweets and gifts incorporating gold leaf. You can come in just to use the Cafe as well.

Another famous tea house is “Shima”. This building was built in 1820 and has never been repaired. It`s in it`s original state to this day. For this reason the teahouse is highly valued as a cultural asset. You can only bring compact size cameras inside, not full size SLRs. I at least took a picture of the exterior of the building. For an extra ¥700 on top of your admission fee, you can enjoy Matcha and Wagashi (Japanese confectionery) in this teahouse.

Some old teahouse buildings were turned into cafes or miscellaneous shops around here.
This was the view of Nibancho street from the cafe I stopped at.

I had a fresh sea food rice box. I had my dinner at 16:00 because I noticed there weren’t many places open for dinner in this area at night.

I took some snapshots of the back alleys and narrow lanes as well.
Photos below.

I had a little rest at “Chabou & BAR GOCHE” in a back alley.

At night on Higashi teahouse district.
You don’t see as many people at night and the light on the street creates a nice photo opportunity.