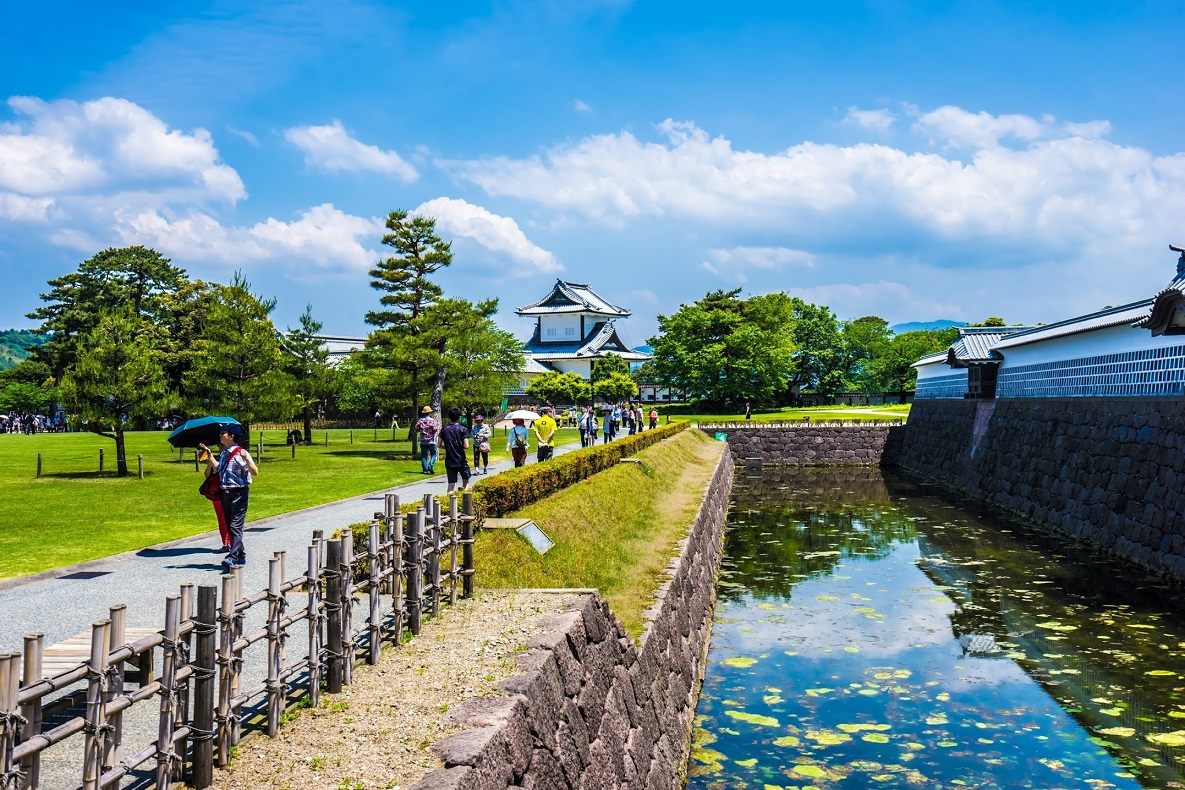 Stroll around the aesthetically pleasing and spacious Kanazawa Castle Park.

Kanazawa is the main city of Ishikawa prefecture. Ishikawa is located in the centre of Japan’s main island. This region is called Hokuriku. In 2015 Japan Rail started to operate the Hokuriku Shinkansen(bullet train) line. Now we can access Kanazawa station from Tokyo in only 2.5 hours!

The most beautiful station in the world. ~Kanazawa station

This time I will introduce Kanazawa castle park. It’s a city park right next to Kenrokuen garden. They used Kanazawa castle`s remains to landscape this park. Admission is free! Great for budget conscious travellers!

Though the original castle itself was built in 1546, it suffered a number of fires and the buildings were burned down. The good news is the old drawings and ancient documents were preserved. Based on those references they restored the buildings in the park. There is a lot to see in this big park.

I entered the park from the east side of the castle 「Ishikawa-mon entrance」.

This gate was reconstructed in 1788 and designated as an important national cultural asset.

Amongst all the castles in Japan, Kanazawa castle has the biggest variety of stone walls. There are 2 reasons for this. First, different building techniques were used depending on the area they were built on. Second, the walls were often rebuilt as building techniques advanced. Take the time to closely observe the beauty of the stone walls.

I entered through the Ishikawa-mon gate, people were enjoying the 「Kanazawa castle relay marathon」 event.

I looked back and photographed the Ishikawa-mon gate from across the moat.

These buildings were reconstructed in 2001. They are located in the centre of the park and so they became the symbol of the park, so to speak.

Hishi-Yagura is a watch tower built upon the edge of a 11.7m high stone wall. This is an example of skillful engineering as it was built on the edge of a stone wall in order to watch over the surrounding area and defend the castle.

Gojukken Nagaya has a total length of 98m and was designed to function as a store house for weapons and as a castle wall in case s of emergency. They built this using ancient Japanese carpentry methods. It lasts a really long time even though most of the wood pieces are fastened without the use of nails and bolts.

Hashizume-mon Tsuzuki Yagura was used to screen people passing to enter into the Ninomaru(where the main hall was).

The view of the Ishikawa-mon gate from inside the building.

Ni-no-maru has a circumference of 530 meters. This was the centre of politics at the time . There was a palace for the Lord’s residence here but it burnt down in 1881. Now this place is used to host various events.

「Litakun」 is the mascot character used to promote Kanazawa’s products and tourism . He often appears at tourist spots. Watch out!

Sanjukken Nagaya was reconstructed in 1858, it was designated as an important national cultural asset together with the Ishikawa-mon Gate(mentioned above).

In March 2015, the restoration of this garden to its appearance from around 1800, was completed. The restoration was based on historical drawings and literature. They built up the soil to create the same three dimensional structures as before. The other characteristic of this garden was the high stone wall around the edges. It`s easy to appreciate the fine craftsmanship.

Sanjukken Nagaya was reconstructed in 1858, it was designated as an important national cultural asset together with the Ishikawa-mon Gate(mentioned above).

On the day I visited they were hosting the marathon. There were many people in this area.

After burning down, this gate was rebuilt in 1772. This is the entrance gate of Kanazawa castle. This Kahoku-mon gate is referred to as one of the 「3 major gates of Kanazawa castle」 along with the Ishikawa-mon gate and the Hashizume-mon gate.

At night they light up the castle.

Kanazawa castle park and Gyokusen’inmaru open up a portion of the building to show off the lit up grounds, stone wallｓ, and other buildings. The light up event is only on Friday and Saturday nights and the night before holidays or when some other events are on. It runs from sunset until 9:00PM. Admission is free as well! The view changes as the seasons change. Don’t miss it!

Writer：kosu
While living outside of Japan for a while, I began appreciating what Japan has to offer. Now I travel in all over Japan to search for that good old Japanese culture and beautiful scenery in each season. It`s my intention to motivate my readers to actually experience the places I introduce through my articles.