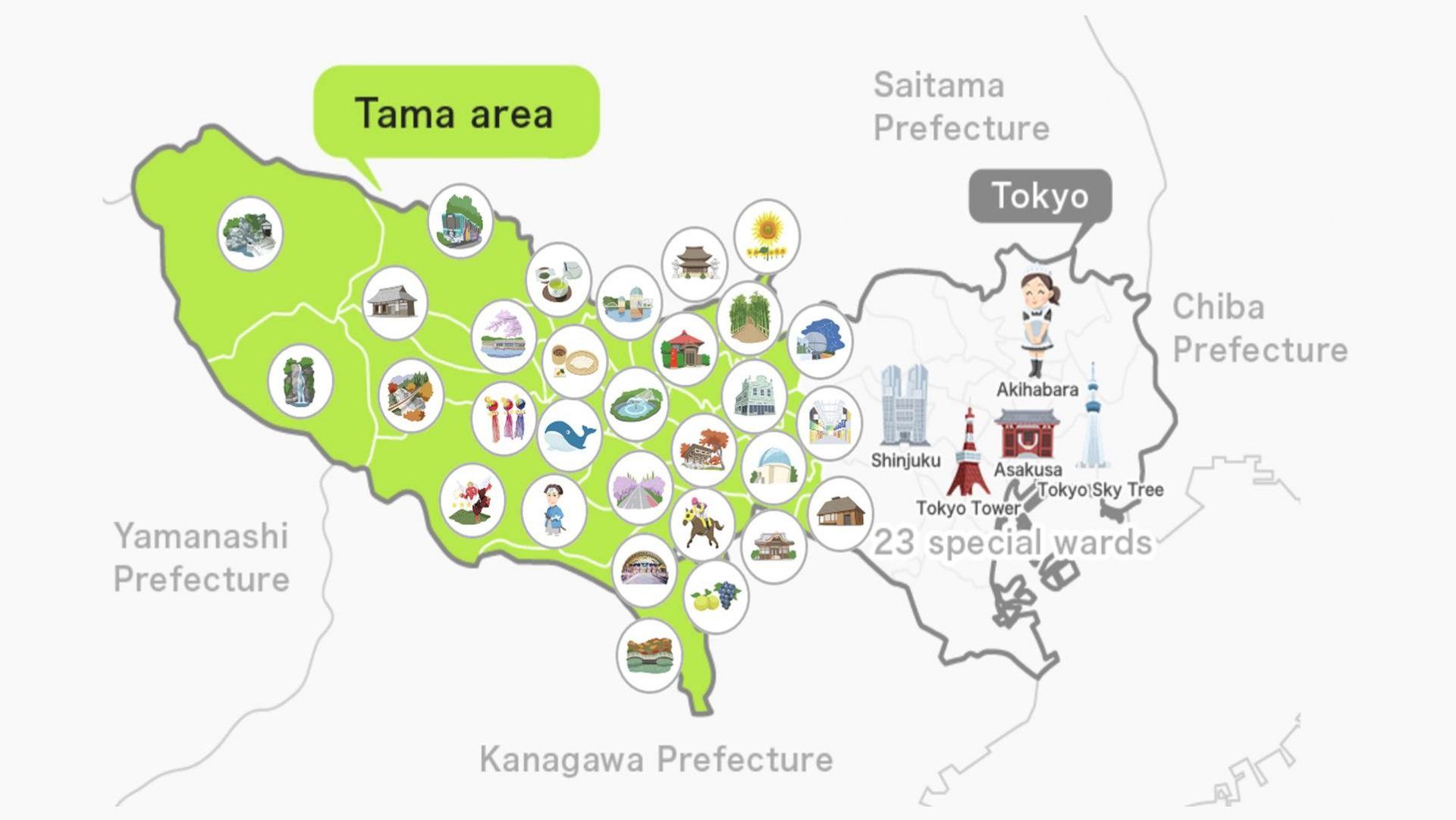 My Journey Through Western Tokyo. Come and experience the wonders of the Tama area!

When the Tama area is mentioned, for many, nothing will come to mind. This is probably due to the lack of information available online. But I wanted to learn more, so I decided to participate in a 1-day exploration tour of the wonders of the Tama area. As someone who's lived in Tokyo for eight years, I realized something on the tour: there is still so much of the city I know nothing about!

The Tama area, also known as Western Tokyo, is about a 1-hour train ride from the more well-known areas of Tokyo (23 wards) such as Shinjuku, Shibuya, or Akihabara. Covering approximately 1,160 km of land, it is made up of 30 municipalities with a combined population of 4.2 million. Western Tokyo makes up over half of Tokyo Prefecture, and it is home to 1/3 of the prefecture's population. It is Tokyo's largest satellite city.

The area's abundance of nature will make you forget that you're still in the middle of one of the world's largest cities! The scenery here is quite unlike what you'd envision when thinking of Tokyo.

Did you know the Tama area is also a haven for anime lovers? Sanrio Puroland, the Ghibli Museum, and the Tenjin-dori Shopping Street (which features monuments of the yokai creatures from GeGeGe no Kitaro) are all located here. You'll also find everything from onsen (hot springs) to sake breweries around Mt. Takao, which rivals Mt. Fuji in popularity and is often referred to as a 3-star Michelin tourist attraction. It wouldn't be an exaggeration to call it the Shangri-La of Tokyo.

Today, however, I won't be sharing information on Western Tokyo’s many wondrous nature spots; I'll be talking about personal experiences that can be had in the area!

Spot #1 Inagi’s Seigyokuen Nashi Farm
The first place I was taken to was one of Inagi City’s oldest nashi, or Asian pear/apple pear, farms: Seigyokuen Nashi Farm. It is said that the cultivation of their original variety of nashi began here, in Inagi City, all the way back in the Edo period. Even today, there is a stone monument on the grounds reading, "Birthplace of the Tamagawa Nashi" in Japanese.

In Inagi, you can experience to pick pears. They are famous for their highly popular "Inagi nashi" brand of Asian pear, which come into season in late August. As they are only produced in limited quantities, you’ve probably never seen them in stores. They are generally sent direct from the farm as gifts, etc. Inagi nashi are the perfect mix of juicy and sweet, and they are known for being huge!

On this tour, I was able to pick some Niitaka nashi instead, which come into season in mid-September and are even more massive than the Inagi nashi! Niitaka nashi also originate in Tokyo. I picked two that, weighing in at an average of 900 g each, were certainly impressive in size! Juicy, mildly sweet, and delicious, they truly are a miracle of nature if I’ve ever seen one! After trying these two varieties, you won’t even bother comparing them to Hosui nashi and Kosui nashi.

The bigger ones were as big as a child’s face—I kid you not (pun intended)!

Great care is taken to produce the most delicious and attractive nashi possible by protecting them from discolouration, insects, and pesticides. Once the nashi reach the size of a ping pong ball, they are individually wrapped in a protective bag while the farmers pray for them to grow problem-free. The nashi grow bigger and bigger until the bag tears, signaling that they’ve reached the ideal size for harvest. Anything grown with this much love is sure to be delicious!

Spot #2 Inagi’s Kawaseien Nashi Farm
This farm cultivates the same types of nashi as Seigyokuen, as well as raspberries and Takao grapes, but what they offer is something different. While you can’t pick nashi here, you can try fresh nashi sherbet! Honestly, I wasn’t expecting much, but after taking a bite I was blown away by the flavour! The sweet, refreshing aroma mixed with the concentrated flavour of the nashi danced on my taste buds; it was like biting into a perfectly ripe piece of fruit! I highly recommend giving it a try.

According to Kawaseien, Inagi is next to Tama River, where happened several floods from long time ago. After every flood , fertile soil was carried and deposited. So here, is particularly suited to the cultivation of nashi. They also treat their soil every winter by covering it in dried sardines in order to provide the soil with natural sources of calcium and minerals! I came to truly admire the work they put into growing their fruit. I felt like I had learned the secret as to why Japanese fruit is so delicious!

While many people flock to Japan from all over the world to see the cherry blossoms every April, the white Asian pear blossoms, which are also in bloom in April, are a beautiful sight as well. Hana kotoba is the Japanese form of the language of flowers. In this practice plants were given codes and passwords. The Asian pear's hana kotoba is aijo, which means affection. Why not check them out?

Spot #3 Chofu’s Yumori no Sato Onsen
At around lunchtime, we arrived at Chofu City’s Jindaiji’s Yumori no Sato Onsen. This natural hot spring facility makes a great day trip. They pride themselves in their water, which comes from an underground water source as is; it is not diluted or treated.

Wait, do I see black water? Yes, yes you do! This onsen's pitch black water comes from an organic matter called humic acid: the final break-down constituents of the natural decay of kelp, ferns, and other vegetation materials found in the sedimentation layers 1500 m underground the onsen. Humic acid is known to have toxin-eliminating properties.

The facility also features a stone sauna, a footbath, traditional seitai (a sort of massage/chiropractic therapy), akasuri (a body scrub massage), and a herbal mugwort sauna that is extremely popular with women.

After getting out of the bath, I indulged in a bowl of seasonal mushroom tempura soba—pure bliss!

If you ever find yourself in Chofu, I suggest visiting the famous 1200-year-old Jindaiji Temple and the Tenjin-dori Shopping Street, where you can meet the popular yokai creatures from the GeGeGe no Kitaro manga and anime.