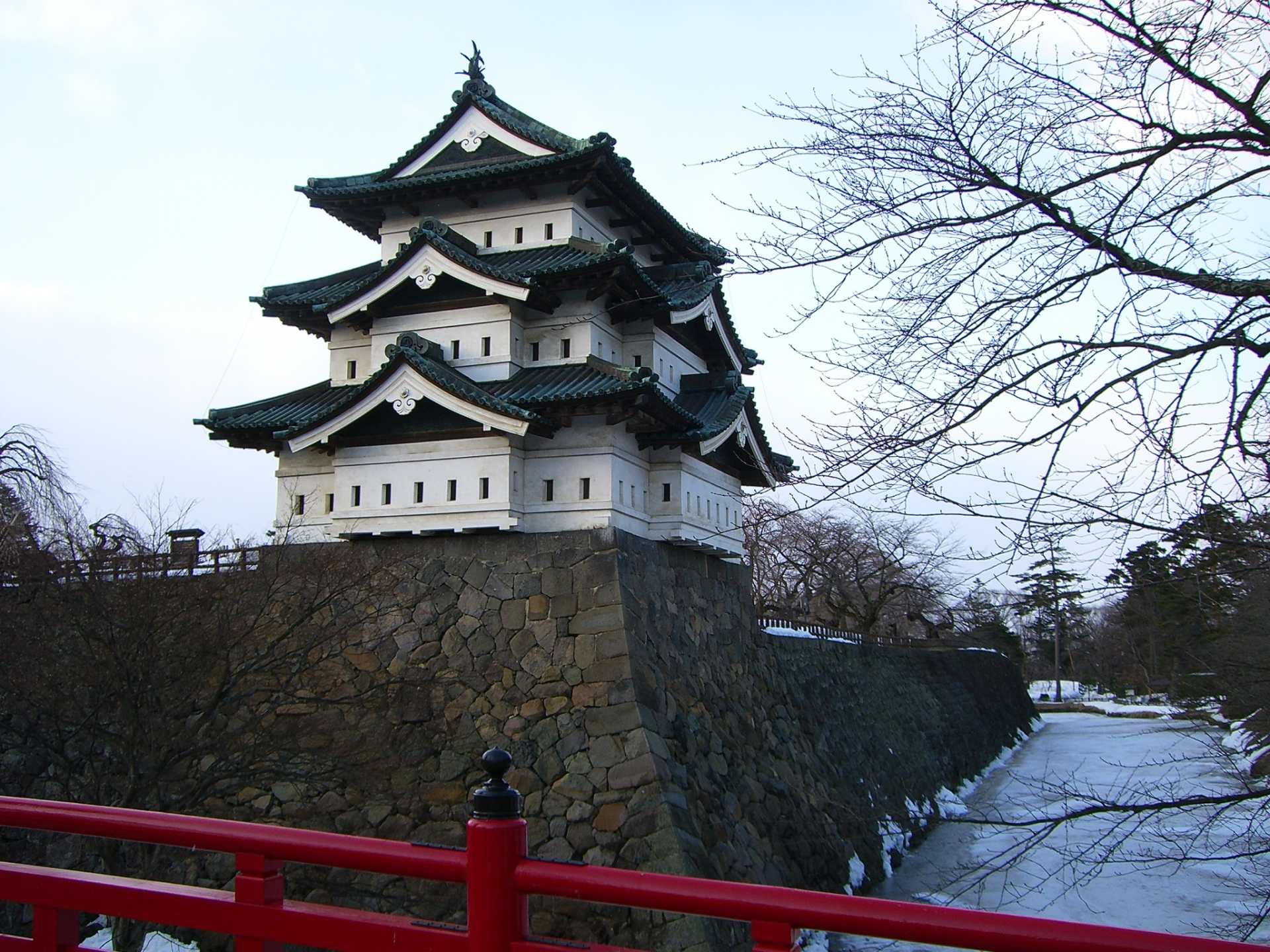 You can reach Shin-Aomori Station from Tokyo Station in about 3 hours by taking the “Hayabusa” Tohoku Shinkansen. Switch to the standard train line for about 40 minutes, and you will reach Aomori Prefecture’s Hirosaki. Here I will report on that area in the wintertime.

When I arrived at Hirosaki Station, outside of the central exit’s tourist information area there was an “apple post.” Aomori is an area known for its apple production.

I dropped off my luggage at my hotel, then I went out sightseeing in the city. First up was the Aomori Bank Memorial Hall. This bank was Aomori Prefecture’s first bank and the 59th national bank in Japan. Apparently, this building was built in 1904 as the main branch of the national bank.

This is the bank building lit up at night. It looks very different than it does during the day.

Next up was the “Tsugaru-han Neputa Mura,” which you can find if you walk a little bit along the moat of Hirosaki Castle. Aomori is known for its apples and for “nebuta,” warrior-figure floats, so this is a good place to visit.

I entered just after opening, and it just so happened to be time for a “Tsugaru-Shamisen” live performance. During the 20-minute performance, I was able to enjoy a genuine performance of “Tsugaru Jongara Bushi.” The timbre of the music resonated in my heart.

When you enter the hall, you are immediately greeted by a huge nebuta. It’s a bit overwhelming.

Next I went to Hirosaki’s landmark, Hirosaki Castle. This photo is of the North Gate.

The snowy scenery is lovely, but I also want to come see this area when the cherry blossoms are blooming.

Moving on, I continued on to the Hirosaki Municipal Tourist Center. On the other side of the plaza you can see the western-style former Hirosaki City Library.

This is the former Hirosaki City Library. It was built in a Renaissance style, and it features twin octagonal towers. Visitors can also explore inside (free admission).

Next door is the former Hirosaki Gakuin Foreign Missionary Hall, where visitors can enjoy a coffee break in the café on the first floor.

You can even enjoy desserts from a variety of cuisines, including French cuisine. I ordered coffee and an apple pie made with Aomori apples to warm myself up.

There is a good bit of distance between Hirosaki Station and the main spot of Hirosaki, Hirosaki castle, but plenty of tourist areas are clustered around Hirosaki Castle, making it a convenient place to go sightseeing.
Give Aomori Prefecture’s Hirosaki a visit in the winter!

Visit Along With: Trip Through Aomori in Winter on Tsugaru Railway’s “Stove Train” - Hirosaki, Kanagi, and Goshogawara
Hirosaki Tourism and Convention Bureau