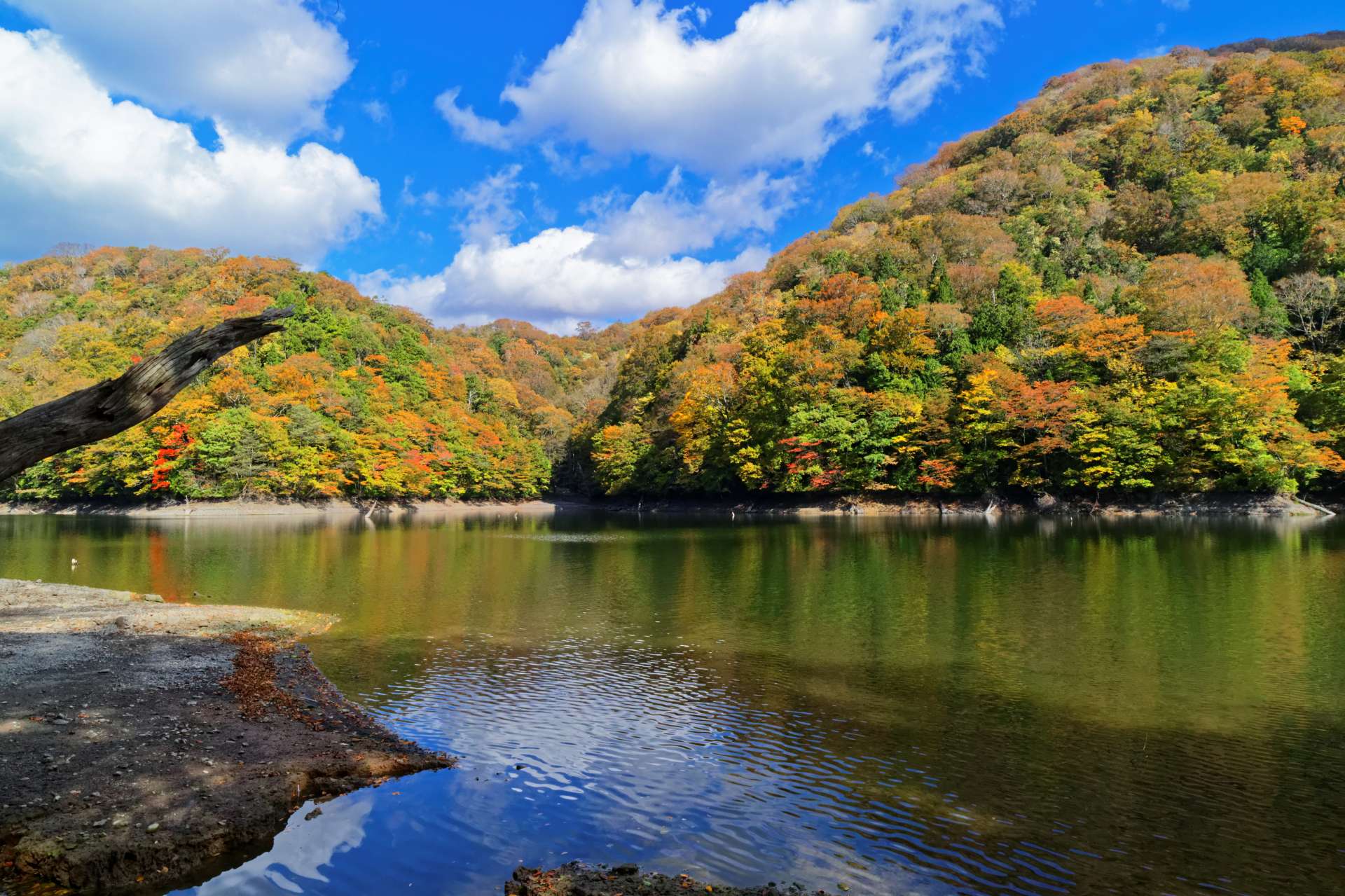 Western Shirakami-Sanchi boasts a fall foliage viewing spot, Ketoba Lake, which is reputed to be a “wonderland on earth”. As its name implies, the lake resembles a cockscomb (“keto” in Japanese). With dense forests of beeches mirrored in the pellucid lake, the scenery is absolutely fantastic.

In the west part of Shirakami-Sanchi, there are total thirty three natural lakes including Ketoba Lake, which are said to have been formed by a subsidence in the wake of a huge earthquake during the Edo period. Only twelve lakes can be seen from Mount Okuzure, hence they are named as Juniko Lakes (literally meaning “twelve lakes”).

Among the twelve lakes, Aoike Lake is most renowned for its crystal clear water all year round.
Furthermore, the lake features a special greenish blue color for some unknown reason. Its water transparency is up to 9 meters; that is to say, withered branches of beech trees lying at the lake bottom are clearly visible through the rich blue lake water from the lakeside. When spring is changing into summer and the sunlight are shining upon the lake, the sight is quite breathtaking.

Ketoba Lake is especially beautiful in fall. A visit to it in a fine day will give you a deeper understanding of the poem “the fall sky is clear and calm”.

Sometimes there are aquatic birds landing on the tranquil waters of the lake for repose. Sometimes there are leaves falling from the surrounding beeches and rustling the ground. Except them, peace reigns. To the left of the gentle trait there is this lake, in which the reflections of mountains and trees are fairly clear. Although a little less transparent than Aoike Lake, this lake boasts a special beauty imbued by such pleasing haziness!

All the lakes can be visited by following the traits and it will take a whole day, when you can refresh yourself in a large serene forest of beeches as almost all traits are amid the forest. ♪

Video on the Fall Foliage around Ketoba Lake

Best time to view fall foliage
Mid-October to late October
Address
Matsukami, Fukaura, Nishitsugaru District, Aomori Prefecture
Phone
0173-74-2111
Access
Get off at Juniko Station on the JR East Gono Line, take a bus of Konan Bus for Oku-Juniko Chushajo and get off at the terminal about 15 minutes later and walk for 5 minutes.
Official website (in Japanese)
http://www.town.fukaura.lg.jp/jyunikonomori/