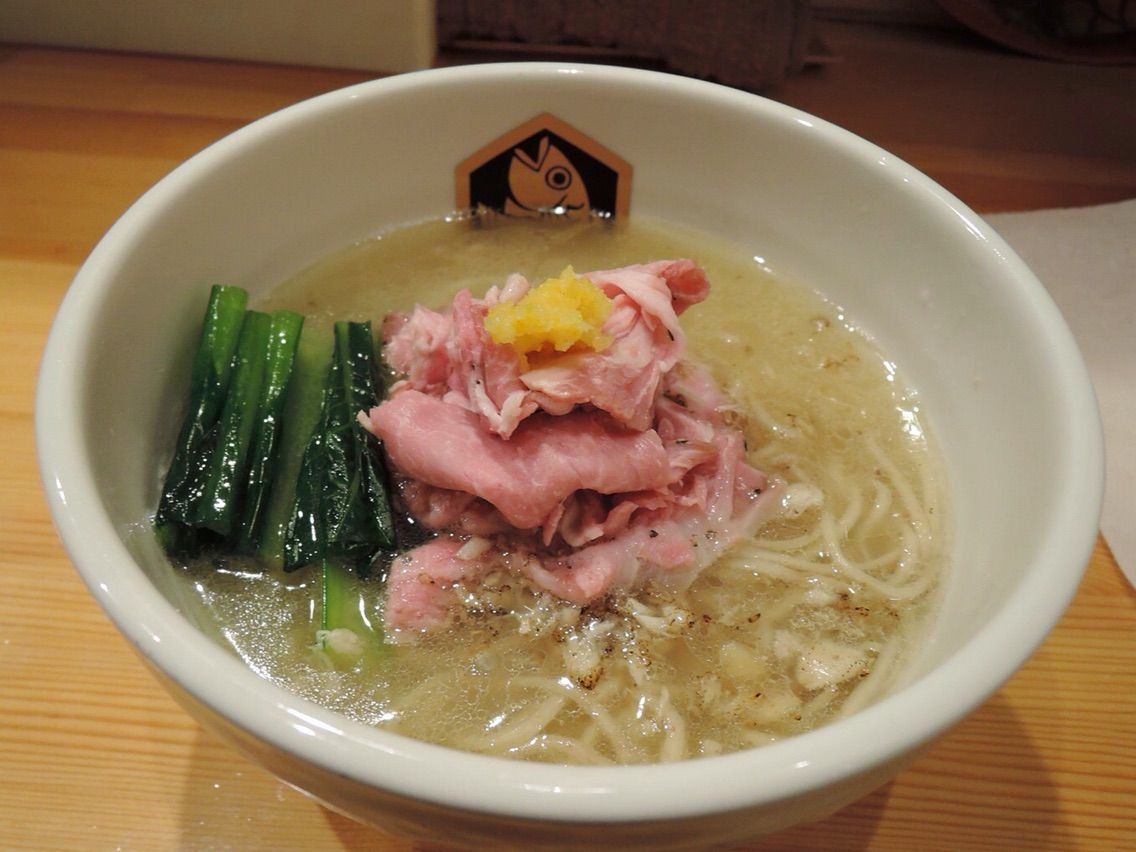 Madai Ramen Mengyo was surrounded by buzz as soon as it opened in January 2016, and there is no end to its popularity in sight!
This shop offers customers something a little different: ramen made with madai, or Japanese red sea bream, from Uwajima, Ehime Prefecture. Mengyo’s ramen is so popular you'll have to wait in a long line to try it no matter the day, and even then it sells out by evening most of the time.
I made it my mission to find out what made their ramen so special!

The ramen shop at the end of the lengthy line

After waiting for a total of 2.5 hours, I finally made my way inside.

As there’s both a simple clear soup and a rich cloudy soup, and a tsukemen version of each, there's a soup base for everyone. Unfortunately by the time it was my turn to order, the rich ramen was already sold out.
I decided to go with their standard Madai Ramen and Zosui Set (1,000 yen). Zosui is a kind of rice soup with seasonings, veggies, and fish, if you were wondering. The ramen is 800 yen on its own, so I felt like I was getting a better deal with the set.

You can enjoy madai in two different ways!

Finally, the meal I had been anticipating was placed before me! I was immediately overtaken by the powerful, mouth-watering aroma of the fish.

Delightfully pink chashu (broiled pork slices), Japanese mustard spinach sent directly from the owner's hometown of Funabashi, flakes of madai meat, and a dash of grated yuzu peel. If that doesn't pique your interest, I don't know what will!

The golden soup is made by carefully shredding the head and collar of the fish and cooking it with a 9:1 ratio of chicken. The result? Irresistible broth brimming with the rich flavor of madai. Even the oil of the fish is used, which is what seemed to give the ramen its full-bodied aroma.

The chashu is delectably unique as well. The meat is low-temperature vacuum dried, smoked in a special smoker with the madai, and then thinly sliced. Its soft, rare texture and delicious smoky scent went amazingly well with the madai soup! The combination was simply perfection!

Their noodles are straight and of medium thickness, made from 100% Hokkaido wheat. The specks of the whole wheat, which are a result of the stone-grinding process, add something to the appearance and the rough surface of the noodles make it easier to pick up the flaked madai and soup when you slurp them up.

After I’d run out of noodles, I added the zosui ingredients and a bit of wasabi to the leftover soup, and voila! Delicious madai zosui!

This dish was just as good and offered something different from the ramen. You could really enjoy the richness of the madai.

Madai Ramen — The product of a great deal of time and effort!

Think for a moment about the slowly cooked madai broth-based soup, the low-temperature vacuum dried rare chashu, the smoked flaked madai, and the stone-ground whole wheat flour noodles. Think about how much time is put in to not only making, but bringing out the full potential of each of these ingredients. Are you impressed yet? I sure am! It is this dedication to flavour that is the secret to Mengyo's Madai Ramen!
You won’t find ramen like this anywhere else. You owe it to yourself to head to Kinshicho to give it a try!

And to give you an idea of when you should come by, the ramen tends to sell out by 7 p.m. on weekdays and 4 p.m. on weekends/holidays, so keep that in mind when planning to visit.