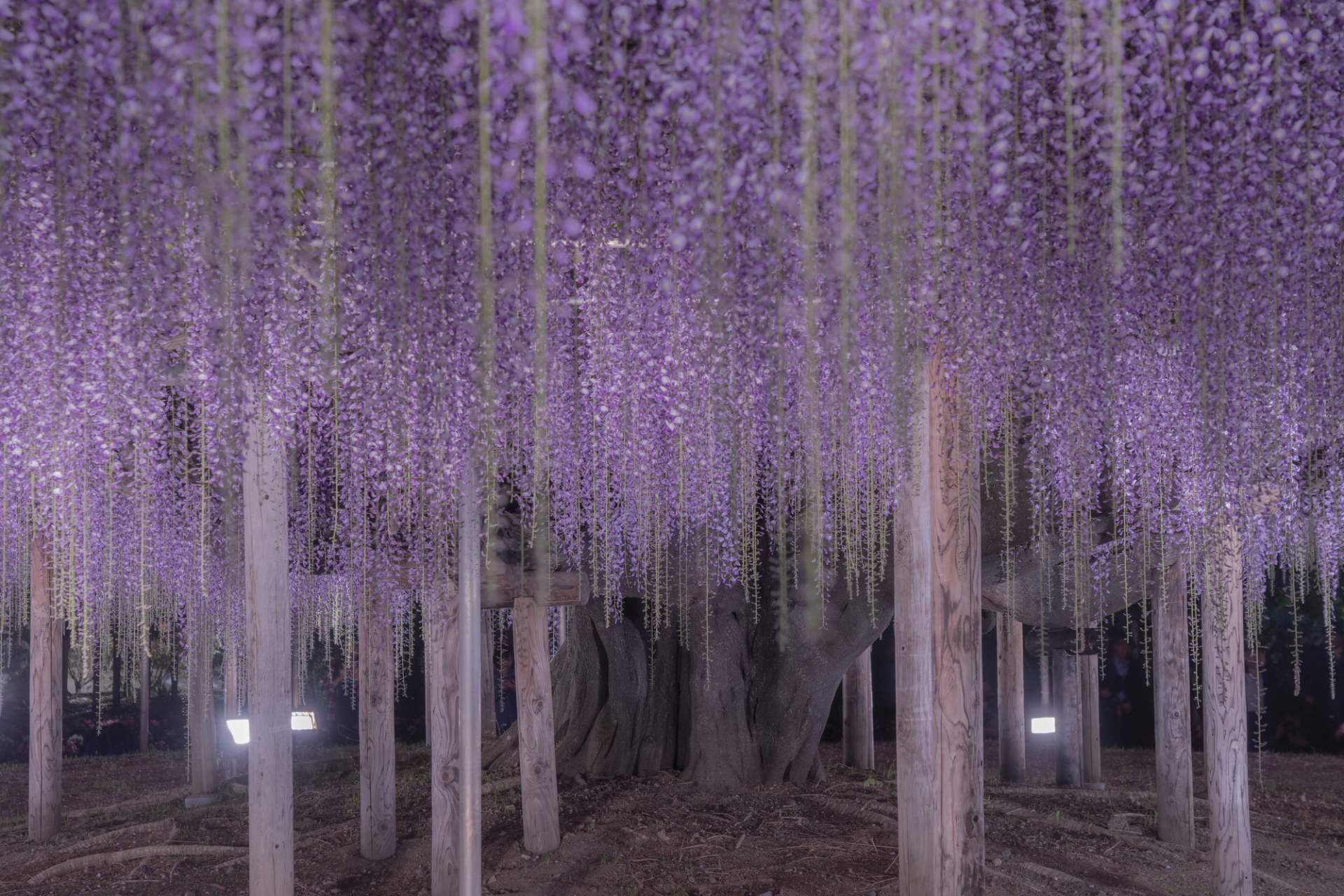 Ranked as One of “10 Famous Travel Destinations Around the World”!

Ashikaga Flower Park is a flower theme park located in Tochigi Prefecture’s Ashikaga City, around 80 kilometers from Tokyo.
Flowers are available for viewing year-round in the park’s 92,000 square-meter area.
One of the park’s particularly big draws is its wisteria flowers. The park holds over 350 wisteria trees, and it is Japan’s largest collection of wisterias.
Ashikaga Flower Park was also selected by CNN’s travel staff as one of “10 Famous Travel Destinations Around the World” in 2014.
Wisterias bloom from around mid-April to mid-May. Their blooming order, from earliest to latest by blososm color, are pink, purple, white, and yellow.
The park’s hours are extended during the peak blooming periods, and the trees are lit up at night as well.
During this same time period, over 5000 azaleas and rhododendrons will also be at their peak beauty.

The wisteria trees have become famous for resembling the Soul Tree from the movie “Avatar.” In recent years, they have become a popular sightseeing location for foreign tourists as well as Japanese natives.

[Full Bloom] Around early to mid-May
80-meter Kibana wisteria tunnel, the only one in Japan!

Address
607 Hasamacho, Ashikaga City, Tochigi Prefecture
Access
3 minutes on foot from Ashikaga Flower Park Station’s JR Ryomo Line
Tel
0284-91-4939
Event dates
From April 13th to May 19th, 2019
(Lighting up period is from April 20th to May 12th)
※Event and light-up dates may vary depending on blooming conditions.
Business hours
7:00-18:00
※Park is open until 21:00 from April 20th through May 12th for light-up event.
Admission
Daytime 900 to 1,800 yen. Evening 600 to 1,500 yen
※Admission is discounted after 17:30 during light-up periods.
※Admission fees vary depending on blooming conditions of flowers.
Closed
Open every day during the festival
URL(English)
https://www.ashikaga.co.jp/fujinohana_special2019/en/index.html