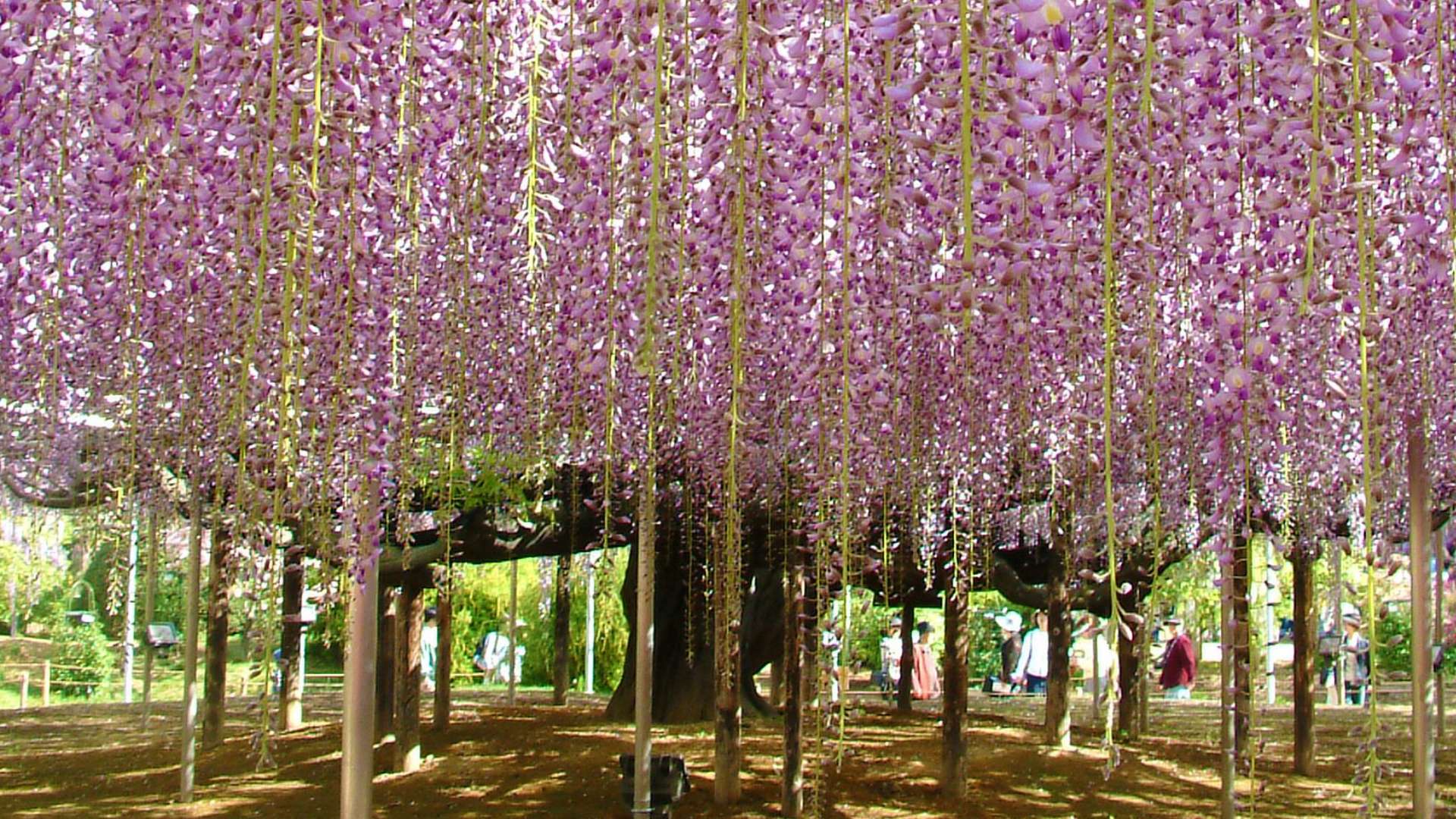 A paradise of flowers and lights. And in this place, its greatest gift: a stunning tunnel of great wisterias

At Ashikaga Flower Park, you can enjoy the sight of all kinds of seasonal flowers, which adorn the park according to eight themes: "Early Spring", "The Spring Flower Festival", "A Tale of the Wisteria", "Rainbow Garden", "Blue and White Garden", "The Flower Faeries Who Float By the Water", "Purple Garden", and "The Garden of Illuminated Flowers". The park is a popular location, enjoying not only local visitors, but those from abroad.

"A Tale of the Wisteria", themed around the wisteria flower that is both a symbol of the park and a designated natural monument of Tochigi Prefecture, enjoys particular popularity. And from mid-April to mid-May, which is the best period to see the park's tunnel of white wisterias and four great wisteria trees, the park plays host to "A Tale of the Wisteria - The Great Wisteria Festival". The park's 100,000 square meters are home to such treasures as a great wisteria trellis that stretches some 2000m, wisterias with flower clusters as wide as 170cm, and a tunnel of white wisterias that extends for 80m. And as peak season approaches, and the more than 350 wisteria trees on the site burst into furious bloom, visitors are treated to magnificent sights that seem almost otherworldly.

The park's beauty was highlighted when it was chosen as the sole Japanese location in CNN Travel's article "Dream Destinations for 2014", and it is now the center of no small amount of attention, both locally and internationally. The park is also illuminated at night during the wisterias' blooming season, making its sights seem ever more magical. Though already beautiful during the day, at night, the wisteria trees take on a still different image, and it is a sight that absolutely must be seen! The pale purple flowers that drape down from above have been enjoying particular popularity as a subject of photos to show off on social media.

Additionally, as autumn comes in, the park holds a light show called "The Garden of Illuminated Flowers". This light show was selected as one of the three most significant in Japan by the Yakei (night view) Convention & Visitors Bureau, and since 2016, it has won first place nationwide in the illumination department for four years running. The show allows visitors the chance to enter a mysterious world woven in flowers and lights.

Ashikaga Flower Park is a paradise of lights and flowers, where you can enjoy the beauty of flowers all year round, and through all the seasons. Visitors to Kiryu and Ashikaga should be sure to check it out.