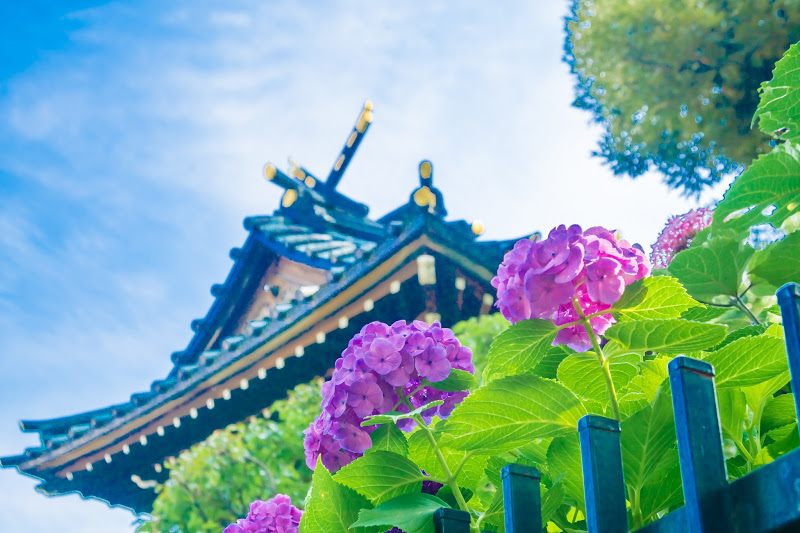 Even if you want to see beautiful hydrangeas in bloom, travelling far for them can be difficult. As such, I’ll be introducing a place I recommend visiting for people staying in the heart of Tokyo: Hakusan Shrine and Hakusan Park, located in Tokyo’s Bunkyo Ward. This area is famous for having the most hydrangeas growing in the metropolitan area, with around 3000 hydrangeas planted. A hydrangea festival is held every year in mid-June, as the hydrangeas reach their peak beauty.

Here I’ve arrived at the torii gate to Hakusan Shrine.

First up for me were Hakusan Shrine’s hydrangeas.

The grounds were home to many varieties, including rare ones that you wouldn’t even suspect to be hydrangeas!

Along the Path from Hakusan Shrine to Hakusan Park

Hydrangeas were also in bloom along the path that leads from Hakusan Shrine to Hakusan Park.

This park also becomes an event venue during the hydrangea festival.
Normally this park seems typical, a small park where children can play, but a few hydrangeas bloom here as well!

Once again, back to Hakusan Shrine’s grounds.

This stone monument was built as a memorial for when Sun Yat-sen sat here in Hakusan Shrine and discussed the future of China and the potential for revolution. When he was sitting there, he saw a shooting star, and at that time he pledged to spur a revolution in his homeland.

There aren’t as many hydrangeas here as there may be outside of the city, but the convenient location near multiple Tokyo stations makes enjoying the flowers easy. There also are not just the usual blue and purple flowers, but plenty of rare colors like pink and white hydrangeas as well!

It was already over by the time I made my visit, but during the “Bunkyo Hydrangea Festival,” Hakusan Shrine’s “Fujidzuka,” which is typically closed to the public, is open to visitors as well. Fujidzuka is an artificial mound made in the image of Mt. Fuji, and hydrangeas bloom on both sides of the narrow paths along it.

Additionally, refreshment booths and shops open on Saturdays and Sundays during the festival period, local schools and clubs put on hydrangea concerts, and mikoshi parade through the area. A unique toothbrush-offering event is also held during the festival.