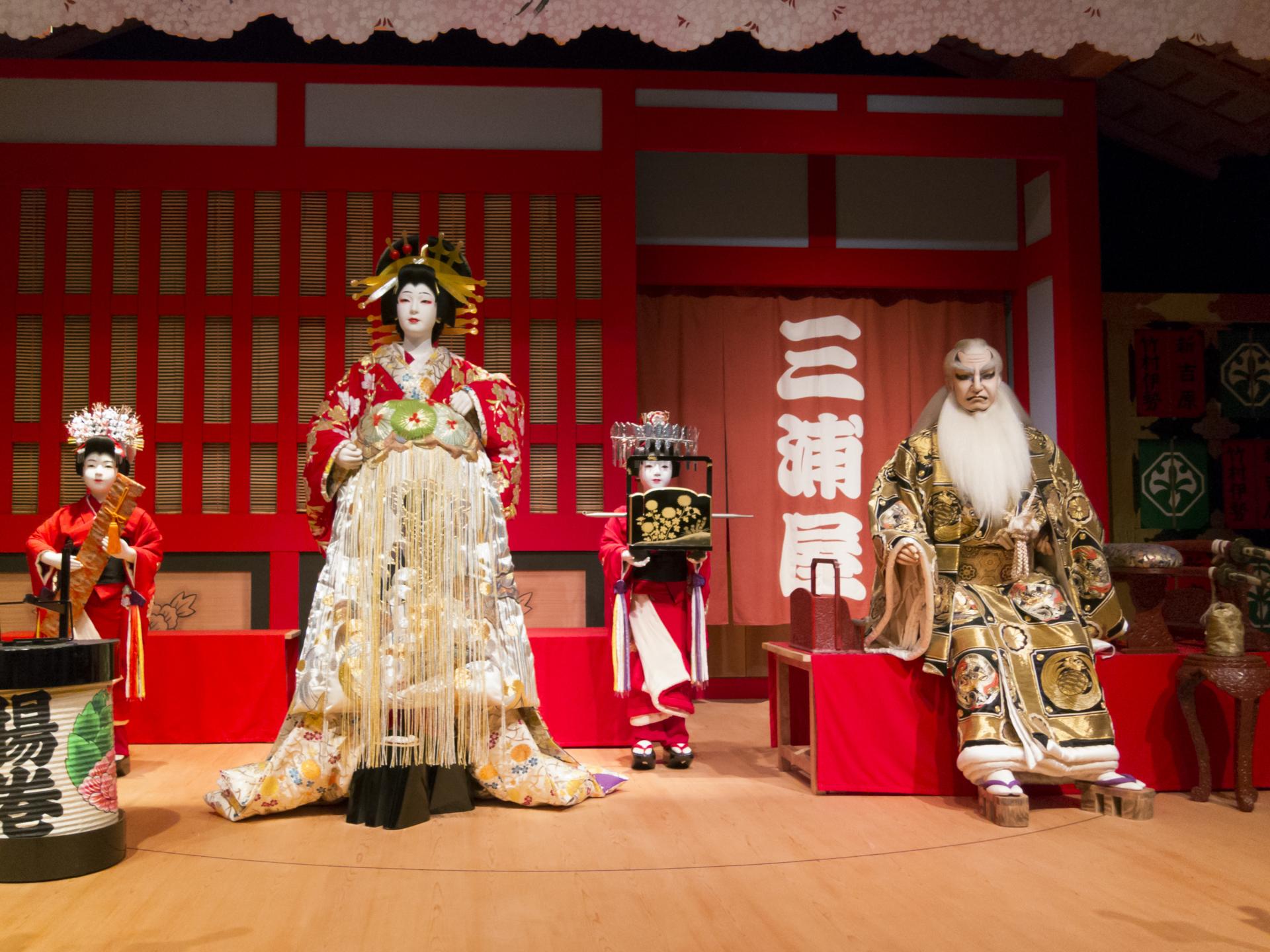 Kabuki, a traditional drama unique to Japan and also one style of traditional Japanese theater, is said to have originated from the “dance of kabukimono” that was popular in Japan around the year 1600. The term “kabukimono” in Japanese referred to those dressing in flamboyant, eye-catching and bizarre clothing and acting strangely. Possibly, they are just the origins of such features of kabuki as dazzling costume, extravagant make-up and over-dramatized actions on the stage.

A kabuki theater has a walkway called a “flower path” (“hanamichi” in Japanese), which runs through the auditorium to the main stage and via which dramatic entrances and exits are made. In the center of the main stage, a revolving stage (“mawari-butai” in Japanese) is set to achieve dramatic effect of transitioning pre-played scenes in an instant. Besides, there are stage traps called “seri” in Japanese. They are also used for transitioning scenes, while actors can be transferred from or to the scene through small traps in an unexpected way.

The dramas staged in a kabuki theater are normally traditional ones. Most of them focus upon the events or stories in the days when samurai hadn’t quitted the stage of history, while the lives and feelings of commoners are reproduced in some other plays. However, actors tender to read or recite their lines in a rather distinctive way, which renders it very difficult to catch the storyline or contents of the play even for those born and bred in Japan.

Many tourists might believe that kabuki is an art form of traditional Japanese theater that few people can enjoy. In fact, you can take a relaxed attitude in sampling the delight of kabuki.

Watching a full program in Kabuki-za normally costs you 4,000 to 20,000 yen. But, should you be new to kabuki, you can choose to buy a single act ticket (“makumi” in Japanese) for a single act, which is priced at 2,000 yen. Single act tickets are popular and unique to kabuki, so they cannot be booked and you have to buy the ticket on the day you see the play.

2. Getting an Experience of Kabuki in the Kabuki-za Gallery

If you are too busy to watch a full play of kabuki, you may pay a visit to the Kabuki-za Gallery established in Kabuki-za, where you can try a carriage used in actual kabuki performance, touch the stage props, or even take photographs. This is particularly recommended to tourists with children!

Viewing the Video on the Kabuki-za Gallery

Kabuki-za, a theater where new kabuki programs are presented to the public each month

Address
4-12-15, Ginza, Chuo-ku, Tokyo
Access
3-minute walk from Exit 3 of Higashi-ginza Station on the Tokyo Metro Hibiya Line or the Toei Asakusa Line
5-minute walk from Exit A7 of Ginza Station on the Ginza Line, the Marunouchi Line or the Hibiya Line by Tokyo Metro
10-minute taxi ride from Tokyo Station of JR East, JR Central or Tokyo Metro
Single act ticket
2,000 yen per adult for the performance at the 4th floor of Kabuki-za, only available for adults.
Earphone guide
700 yen per person (in Japanese or English)
Official website (in Japanese)
http://www.kabuki-za.co.jp/