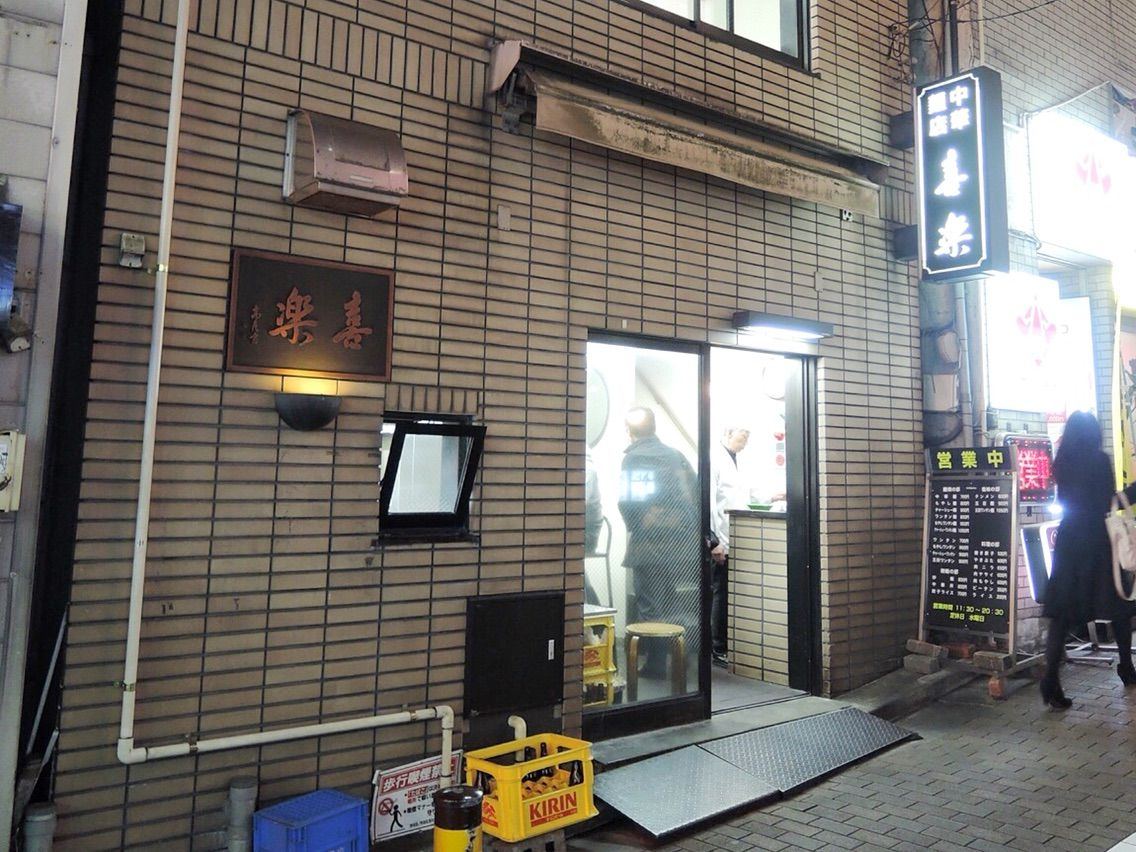 Shibuya is known as being one of the most trendy, fashion-forward places on earth. Busy intersections and unique youth culture are a couple other images that come to mind.
However, contrary to popular belief, there are in fact traces of old Japan hidden amongst the bright lights and shopping malls of Shibuya. KIRAKU is one of such places. This ramen shop has been in business for over 60 years—since 1952 to be exact! With patrons of various ages, from youth to the elderly, there’s no end in sight for KIRAKU’s popularity.

After exiting from Shibuya Station’s Hachiko exit, climb up Dogenzaka until you see KIRAKU on your far right. During peak hours, you’ll usually see the line of people waiting first
The shop is divided into 2 floors: Counter seats can be found on the 1F and tables on the 2F.

The star of the menu is certainly the chukamen (ramen made with Chinese-style noodles), but they also have a selection of other noodles and gyoza, stir-fry, etc., meal sets. Nothing on the menu will disappoint, but my personal favourite was the Wonton Ramen! This popular dish features a soy sauce base and wontons among other toppings.

Wonton Ramen: The intoxicating aroma of fried onions will win you over

I waited eagerly for my ramen to be brought to me. Meanwhile, admiring the shop’s classic, retro atmosphere. Even the ramen was simple and seemingly unchanged by trends in the food scene. The toppings were wontons, chashu (braised pork slice), bean sprouts, and a marinated soft-boiled egg.
But that’s not all! It’s actually the soup that makes KIRAKU’s ramen so good!

Floating in the transparent soy sauce-based soup you’ll notice… fried onions! The oil used to fry the finely chopped onions is also used.
This is the secret to KIRAKU’s ramen.
The unique sweetness of the onions adds another layer of flavor and mellows the taste of the soy sauce. The aroma itself is enough to sell the dish, but since you can’t smell it through the internet, let me put it simply: This ramen is good. Really good.

THE noodles were of the straight and semi-thick variety

This shop’s noodles were of the straight and semi-thick variety and were nice and chewy. I noticed the subtle but distinctive smell of wheat with each slurp. These were noodles worthy of praise.

KIRAKU uses pork thigh for its chashu, which is different. The result is firm meat without excessive amounts of fat. My ramen had one large slice in it.
The simple ramen and classic chashu did, however, go wonderfully together!

And the wontons were just as slippery and chewy as the noodles, maybe even more so, with delicate skins that almost tore as I carried them to my mouth. Bite-sized perfection bursting with meat juices! The fried onion oil in the soup made them even more delicious!

A famous shop popular with people of every generation

Chewy noodles, crunchy bean sprouts, thick chashu, and juicy wontons. Each ingredient was good on its own, but merely combining them together would, in most circumstances, just leave you with your average bowl of ramen. Nothing to write home about.

It’s the sweet and aromatic fried onion oil soup that brings this dish together, creating the masterpiece that is KIRAKU’s ramen. KIRAKU is sure to continue to win the hearts of its customers with its fried onion oil until the end of time. And I must say, it worked on me.

You definitely can’t visit Shibuya without tying this ramen.