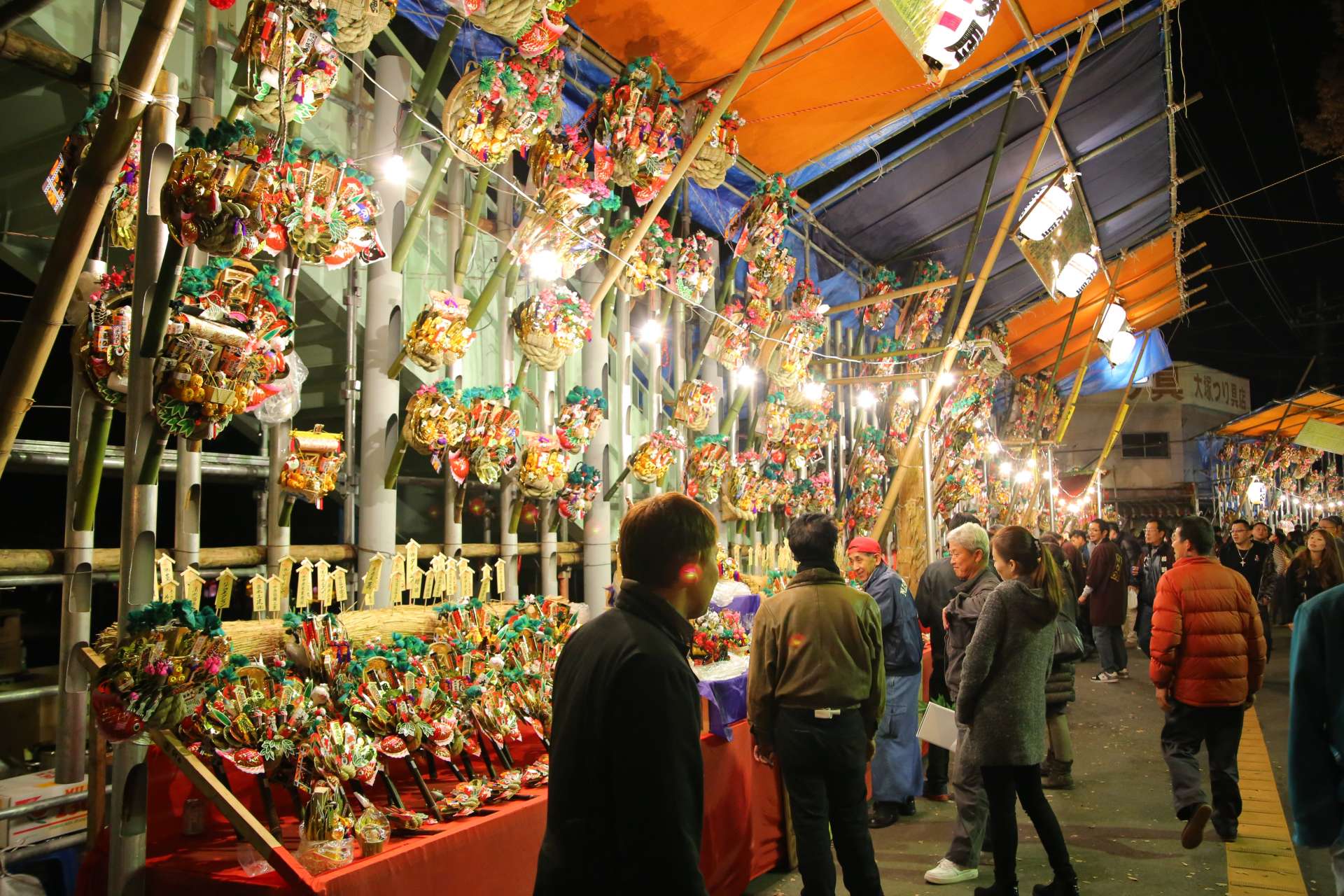 Kiryu Nishinomiya Shrine is the head shrine for the god Ebisu established from Nishinomiya Shrine in Hyogo Prefecture's Nishinomiya City. Having been classified as the only branch shrine directly descended from the Kanto region of Japan, it has been allowed to be called, "Kanto Issha".
The regularly held festival, held every year on November 19th and 20th, is the Ebisu-kou Festival.

The Ebisu-kou Festival, in accordance with its name, is based on the "beliefs of the god Ebisu". During Kannazuki (the tenth month of Japan's traditional calendar), the god Ebisu does not travel to Izumo Grand Shrine and as an absent god, stays to protect people and their homes. The Ebisu-kou Festival is a special event where people visit the shrine to offer their gratitude to Ebisu for a safe year and pray for an abundant harvest, a big catch, and a thriving business. In Kiryu, it is also said that "tabi (traditional Japanese socks) and kotatsu (a traditional Japanese table with a heater) usage starts on the day of the Ebisu-kou Festival", favored objects that are a reminder of the coming of winter.

Actually, Kiryu Nishinomiya Shrine is located on the grounds of the Miwa Shrine that worships the god Daikoku and the Ebisu-kou Festival is an important festival where the two great fortune gods, Ebisu and Daikoku, gather. With the gods sharing their prosperous divine favor, a large number of worshippers come to visit from the whole region of Kanto, with the average number in attendance surpassing 200,000 people. The "Yoimatsuri" (eve of the festival) on the 19th, begins from the early morning and goes throughout night. The "Honmatsuri" (regular festival) on the 20th, goes until 10:00pm. The two-day period is brimming with energy and liveliness with a diverse variety of festivities such as the offering of kagura (ancient Shinto music and dancing), dances associated with the textile legend of Princess Shirataki, Ebisu taiko drum performances, Kiryu chestnut doll plays, and fukumaki (throwing of beans). You can thoroughly enjoy the festival mood to your heart's content. Also, lining the road approaching the shrine and surrounding streets, there are several hundred stalls that sell lucky bamboo rakes and charms along with food. The streets are so bustling that just walking can become challenging.

Speaking of the god Ebisu, he exists as the so-called leader of the Seven Deities of Good Luck. He is in charge of business, the fishing industry, agriculture, and all commerce. Thankfully, Ebisu does not discriminate by giving good fortune to anyone, to men and women of all ages. During next year's late autumn with swelling hope, please try visiting to seize your luck.